Detective Ritz and the Wrongful Conviction of Malcolm Bryant

Yesterday, Malcolm Jabbar Bryant was released from prison after serving seventeen years of a life sentence for the murder of 16 year-old Toni Bullock in Baltimore City. The lead detective on the case was William Ritz, one of the lead detectives on Adnan's case. There was one* eyewitness to the murder: Tyeisha Powell. Based on the description that Powell gave of the perpetrator, the Baltimore Police created a composite sketch, which Ritz posted, along with the enticement of a Metro Crimestoppers reward, for information leading to an arrest/indictment: 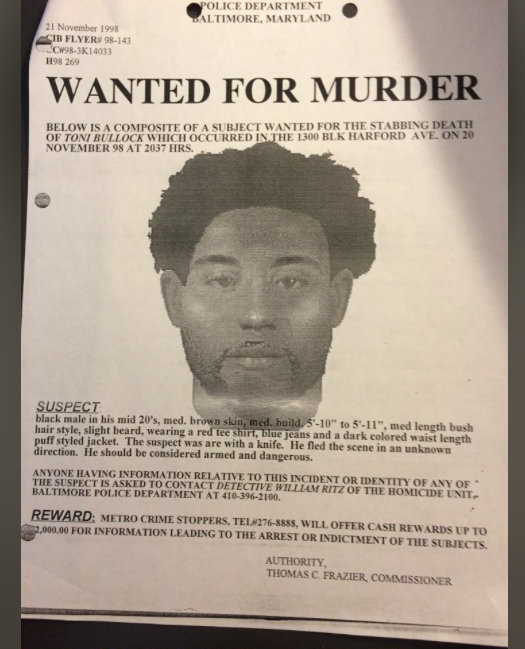 Ritz began getting calls after the distribution of the composite....The police then began “accumulating names and eliminating those individuals as suspects.”...Ultimately, a photographic array was prepared and on December 1, 1998, Powell identified [Bryant]'s photograph.

So, where did things go wrong, and how were they eventually set right(ish)?

Let's start with the description of the perpetrator given by Powell. Powell told Maryland State's attorney Marilyn Mosby's investigators "that she had caught only a glimpse of the attacker, on a rainy night and under duress." Moreover, Mosby herself admitted that "[t]he man in the composite sketch... lacked any notable features."

That's a problem, especially given that Bryant apparently did have distinctive features on November 20, 1998, the night of Bullock's murder. That murder took place at "about eight o'clock," and Powell indicated that the perpetrator

was in his early twenties and had a “bush and he had facial hair like he let his mustache grow, his beard.”....He was wearing “a black puff jacket, a red t-shirt under it and some blue jeans.”...He was a “couple of inches taller” than Powell's height of 5′ 3-1/2.”

Franklin Wills testified that he had seen [Bryant] from five-thirty to sixthirty or six-forty-five on the evening of the stabbing. Wills said that [Bryant]'s hair was in braids and that he was wearing casual jeans and an eggshell white sweater. Wills did not recall whether [Bryant] had been wearing a jacket but said that the jacket [Bryant] normally wore was “an army fatigue-type jacket.”...Wills was again with [Bryant] from about ten o'clock that evening until the early hours of the next morning. His appearance was the same as it had been earlier in the day....

Antonio Brooks also saw [Bryant] on the evening of November 20, 1998. Brooks recalled that [Bryant]'s hair was “platted,” i.e., in “cornrows” and he was wearing blue jeans, a cream sweater and a green army fatigue jacket....Brooks said that [Bryant] had been with him from about seven o'clock on the evening of November 20, 1998 until three or four o'clock the next morning when they were put out of the Club Twilight Zone because they had been involved in a fight....

Dante Bailey confirmed that at 5:30 or 6:30 on the day in question [Bryant] had had “cornrows” and had been wearing a white sweater, blue jeans and brown shoes....

Daa'iyah Bryant testified that she was [Bryant]'s sister and had been a cosmetologist for nine years, currently employed at Superman's Barbershop....On November 18, 1998 she had put [Bryant]'s hair in braids at her mother's house....She had also seen [Bryant] on November 20 and he had “[t]wo day old braids going straight back.”...

Samuel Jackson saw [Bryant] late on the evening of November 20 and remembered that he had “[c]ornrows, like braids towards the back.” Jackson also recalled the “light color, like a white” sweater that [Bryant] had been wearing, “[b]ecause everybody wanted his sweater.”...Christina Helmsley said that [Bryant] had asked her to remove the braids on November 22, 1998, “explaining his head was breaking them - done over.” She had complied.

Nonetheless, Powell picked Bryant out of a lineup, albeit an outdated version of the lineup that has been replaced in Baltimore by "a 'double-blind' process in which witnesses are shown possible suspect pictures one-by-one instead of six at a time." As a result, Bryant was convicted, despite his alibi and appearance/attire on November 20th.

court ordered the state to send nail clippings recovered from the victim for DNA testing. The DNA report revealed a partial male DNA profile on the nail clippings, which included a rare identifier, which did not match Mr. Bryant. Following the revelation of this evidence, the court ordered the state to then send the victim’s clothing for DNA testing.

The State, though, claimed that no DNA testing remained/fought additional DNA testing. Finally, the victim's t-shirt was tested in 2015 and

revealed a full male DNA profile that matched the partial profile from the nail clippings, including the rare identifier, which was inconsistent with Mr. Bryant’s DNA.

In total, six rounds of DNA testing were done, with the State claiming after each one that the results did not prove Bryant's innocence. Such protestations continued until recently, when the State changed its tune and supported Bryant's release.

In her press conference yesterday, Mosby said that it was "hard to reconcile that we live in a world that would take 17 years away from an innocent man," but she also claimed that there was no evidence of State misconduct. The first part of her statement is clearly correct. As for the second...that will likely be addressed soon in a court of law.

*Expect more on this soon.

**"Ritz attempted to find clothing of [Bryant]'s that would have matched the description given by Powell but he was unsuccessful.

If Bryant had had the bad luck of owning a black jacket and red shirt, I wonder if Maryland ever would've backed down. Because who could've argued with corroborative evidence like that??

The State put a witness on the stand who testified that he had destroyed all available DNA evidence, and no DNA testing could be done, when he knew full well that other fingernail clippings still existed, and yet Mosby felt confident dismissing that as "not at all" an example of misconduct. I guess that explains a lot about Baltimore.

And even ignoring the fact that other undisclosed samples existed, and just focusing on the samples that were used by the investigators, the analyst *knew* that the DNA from those clippings he did use would be destroyed if he tested them for blood. He decided to test for blood anyway, even though a positive rest for blood had no evidentiary value on its own. In other words, the only apparent value from conducting the test was the destruction of the DNA evidence.

Whether or not there was state misconduct one of the things that remains most disturbing to me is that willingness of juries to convict. I read some time ago that across all areas of criminal law 85% of trials lead to convictions. i wish I could go into a casino and win 85% of the time. So either prosecutors only bring the cases which are slam dunks or the system is rigged. Given the number of cases like this that pop up, what we really need is more skeptical juries.

I wonder if there was a Crimestoppers pay out for this case?

What is with the refreshing can anybody stop it? Just lost my post and don't have time to retype!

Daniel, I've been putting the idea out there for 'jury training' prior to entering the jury box, to reinforce just this idea: skepticism and 'innocent until proven guilty'. Too many people kow tow to authority, no matter what a judge says in instructions. I know it sounds odd, since the judge is also an authority figure, but I'm guessing the internal head talk in most people is: if he/she got arrested, there was a reason, ergo the likelihood is guilt. Prove to me he/she did NOT do it AND who DID!

Yet that isn't the defense's job. Their job is to counter the case the put forward by the state, often with their hands tied by obscure bizarre law (Denny rule as we've seen in Wisconsin's Avery case) that the jury wouldn't have a clue about. Reasonable doubt about what? The guilt? The evidence? The performance of the attorneys? The witnesses? Any of it? All of it?

It ends up being 'the vibe of the thing', which defaults to 'he's guilty, prove to me he didn't'.

Cathy: hint. Create a response offline then copy it in. I've lost too many comments to count. This works for me.

Bryant’s wrongful conviction and incarceration is tragic indeed, but it may be even worse than we know if the actual perpetrator of this heinous crime committed more attacks or murders in the last 17 yrs.

Re Susan's "...yet Mosby felt confident dismissing that as "not at all" an example of misconduct" comment above:

Is it too simplistic to suggest that this is where the State start from before working back? That issues of malpractice, compensation, personal vanities and the need to hold on to a 'win', are all much more important than justice? The lack of shame in overlooking questions of corruption and/or fecklessness of police seems to be a deliberate policy.

Do you know if Baltimore's police and prosecutors being so hell-bent on convicting anyone and everyone, regardless of evidence or actual guilt, and then fighting like rabid dogs to keep those convictions intact, even in the face of obvious and overwhelming evidence that they're wrong is unusual?

Is it strictly arrogance and the belief that they can do anything they want without any checks? That they can't get anything wrong, no matter what they do? It certainly seems like that's the case.

I would hope this type of thing is unusual, but I suspect it's more the norm than the exception in law enforcement. What a tragedy that such a great country has such a huge flaw in its government.

Cathy my real name - I suspect the refreshes are about the ads in the borders that help pay for this site--more refreshes, more money in advertisers fees (i.e. the refreshes that delete our unfinished posts aren't going away anytime soon). Type your comments in a word processor or a notes app and then copy/paste them over here when you're done. That's the best way I've found to combat it.

I have one word for you, Cathy: notepad

Got the message loud and clear everybody! Thank you!

I struggle to believe they genuinely thought they had the right guy in this case.

Cupcake - I think it's pretty clear they don't care about justice. They care about convicting the easiest person to convict. And, often times, that's an innocent person. Innocent people often don't have a defense because they weren't involved in the first place and know nothing about the crime. Law enforcement knows that.

I'm starting to believe that our jury system is a horrible way to dispense "justice". Any jury that will listen to the above-described testimony, and then completely blow it off, shouldn't have anyone's life in their hands.

I also struggle to understand anyone who would invent a website that refreshes like this. I've been on plenty of blogs, all with ads, and this is the only one on which this happens.

Does this mean that Adnan's legal team will start pursuing the DNA testing finally? It sounds like it would be beneficial for them to do so since it can be such a lengthy process and is the best way towards exoneration. Good news that Mosby's office is taking a harder look at wrongful imprisonment petitions!

Can you clarify if the PERK kit, hair and fingernail clippings have been located? Did the innocence project find out anything from the motion they filed?

Amy: the perk kit's seal is broken, meaning the state did something with it before. Makes you wonder if it was a Dna testing that pointed to the actual perp which was not disclosed to the defense.