Nisha's Testimony & The Rule Against Hearsay

In response to my recent posts about Nisha's police interview and testimony (here, here, and here), I've gotten a few questions: (1) Where are the notes from Nisha's interview with the defense private investigator; (2) Were Adnan's statements about visiting Jay at the adult video store inadmissible hearsay; and (3) Were the notes from Nisha's police interview inadmissible hearsay? In this post, I will answer these questions.

Earlier, I commented about how I thought that I had notes from an interview of Nisha by the defense private investigator. Specifically, I thought that these were notes that Gutierrez created from this interview, like the notes that she created from the PI's interview of Coach Sye.  After all, the Nisha notes and Coach Sye notes were in the same file. Well, here are the Nisha notes: 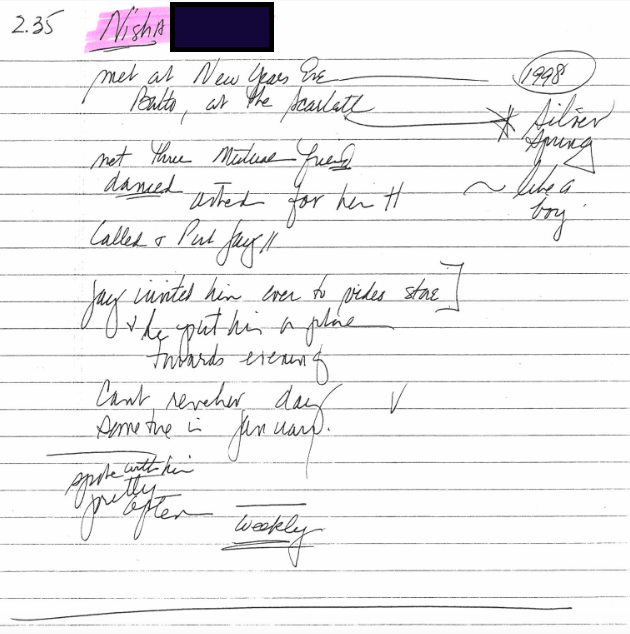 Unfortunately, it now seems that these are simply notes that Gutierrez created while Nisha testified at trial, and there are no notes of an interview of Nisha by the defense PI in the defense files. If such notes do exist, they might be in the files of some other client, just as many files from other clients are in the defense file for Adnan's case.

Adnan's Statements About Visiting Jay at the Adult Video Store

According to Nisha's testimony, it seems now seems clear that, during the Jay/Nisha call, (1) Adnan called Nisha; (2) told her he was visiting Jay at his job at an adult video store before entering that store; (3) entered the store; and then (4) handed the phone to Jay, who wanted to talk to her.

Meanwhile, Maryland Rule of Evidence 5-803(b)(3) provides an exception to the rule against hearsay for

The key with each of these exceptions is that the speaker/declarant is making his statement as/right after an event/condition. As such, the statement is likely to be accurate instead of mistaken, and honest as opposed to an after-the-fact fabrication. Imagine that Dan is being investigated for a murder that occurred a few weeks ago, and he says he was at the movies on the night of the murder. This could be the truth, but Dan could also be mistaken, and he also could have fabricated this alibi in the intervening weeks.

On the other hand, assume that Dan's friend Fred is interrogated and tells the police officer that Dan called him on the day in question (a fact corroborated by Dan's call log), with Dan telling him that he was buying popcorn and Sno-Caps at the concession stand. It's highly unlikely that Dan was mistaken when he made this statement, and it would be a lot tougher to come up with a spur-of-the moment lie than a lie created after days/weeks of deliberation. That said, there is still some possibility that Dan is lying.

In some cases, however, the risk of the declarant lying is close to nil. Imagine that Dan is charged with a murder that occurred on January 13, 2016. Al, an alleged accomplice, says that Dan handed him his cell phone soon after the murder to talk to his friend Fred just before Al and Don bought weed. Like Al, Fred only remembers one phone call between the two, with Dan handing Al his phone after saying that the two were going to see the movie "10 Cloverfield Lane."  This would be a huge problem...for the State. That's because "10 Cloverfield Lane." wasn't released until March 11th, and it wasn't even announced until January 14th or 15th. Therefore, unless Dan is clairvoyant, his statement about going to see "10 Cloverfield Lane" couldn't be a lie.

The notes from Nisha's statement to police on April 1st/9th are inadmissible hearsay. They were not statements about events made while/soon after Nisha perceived them (Rule 5-803(b)(1)), and they were not statements of present sensation or future intention (Rule 5-803(b)(3)). Indeed, they weren't statements by Nisha at all, with the State making the choice not to record an interview with Nisha like they did for Jay, Jenn, Cathy, Debbie, and even Ju'uan. As such, the Maryland Rules allowing for the admission of recorded statements didn't apply. Instead, the notes were hearsay and indeed even hearsay within hearsay, making them exactly the type of unreliable statement that is excludable under the rules of evidence.

Would Adnan's statement even be hearsay? Couldn't an attorney argue that it is not being offered for the truth of the matter asserted? It is the fact that he mentions Jay's store that is significant, not whether they are actually there?

Dan: Yes, you are correct. I was going to write a paragraph about why Adnan's statements might not even be considered hearsay, but the post was getting too long.

The Nisha notes you posted, which you say are CG trial notes, look very similar to the Sye notes which you said were taken from the PI account of his meeting with Sye. The check marks in particular seem to show someone at trial going through the proceedings. Care to comment?

Boo-zo: The notes that have Coach Sye's home and work phone numbers and have a notation about track practice starting at 3:30? As much as I wish Coach Sye had testified to a 3:30 P.M. start time at trial, those are notes by Gutierrez based on the PI's interview of Coach Sye.

Plus, Coach Sye testified from 11:46 to noonish, with Becky being the next witness at 12:02 P.M. Gutierrez's notes from the PI's interview with Coach Sye list a time of 2:00.

Would her previous testimony from the other trials be admissible, since they were recorded?

jeannette: Yes, Nisha's former testimony from the first trial would be admissible under a few different scenarios.

Took me a second read through of the first two comments to grasp what was said--and it was worth it. Very true.

The testimony wouldn't be in the form of "he told me they were at location X," rather it would simply be "he used the phrase, X, during the conversation."

Since no one seems to have pointed this out, the Nisha notes and the Sye notes both had "2" in them. They are vastly different in how they were written. It is easy to see that Sye is from the PI and Nisha is from CG at trial. Just so people don't think that all of the notes were CG's because they look similar like how alot of people are saying on the serial sub. I could do a more extensive look at the handwriting but I'm lazy and the 2's are pretty easy to see how different they are. Thanks for being awesome Colin.

Ryan--the people on the reddit sub start with a conclusion and work backwards from there. They'll probably say the 2's aren't similar because...Adnan planned to have the Nisha call be a fake alibi, and by telling CG to write the 2's differently, it'll help him because now it looks like they were written by diff people.

Adan's out-of-court statements are not hearsay. He is a party to the action. See whatever the Maryland equivalent of Fed. R.C.P. 801(d)(2).

Paul: Exactly. Of course, the defense would want to prove that Adnan was at the video store at the time, which is where the hearsay exceptions come into play.

Ryan and Paul: I don’t know what to make of the handwriting.

i have a strong belief that the key to the denouement of this mystery is staring us in the face, ostensibly hiding in plain sight... not much unlike Hae's car seems to have been. Id really like to see more information unearthed pertaining specifically to the car. Amid the million flying pieces of shrapnel in this case i think the car is the missing link.

Colin, what was Jay's timeline for speaking with the BPD? And the pulling of Adans cell records? With him (Jay) being the one specifically asking to speak with Nisha, I feel like he needed to have this conversation based on the cell phone records.