Yesterday, there was a moment when I thought that I might need to reassess my opinion regarding the innocence of Adnan Syed: 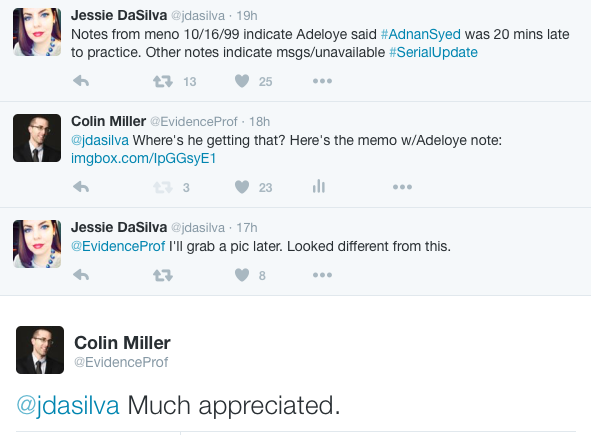 Later, Jessie did indeed grab a pic of the State's exhibit, and it turns out that the exhibit does not support the State's argument at all.

I've written before that there are several versions of the 10/16/99 track memo in the defense files. These are collected in a file called "Track Team Roster." In all, there are eight versions of the memo in this file, and none of them contain any mention of Adnan being 20 minutes late to track practice.

A few weeks ago, however, the Deputy Attorney General was able to review the defense files because attorney-client privilege is waived when a defendant brings an ineffective assistance of counsel claim. During that search, he apparently found a version of the memo that was in a different part of the defense files. Here is Jessie DaSilva's picture of the memo that was introduced by the State: 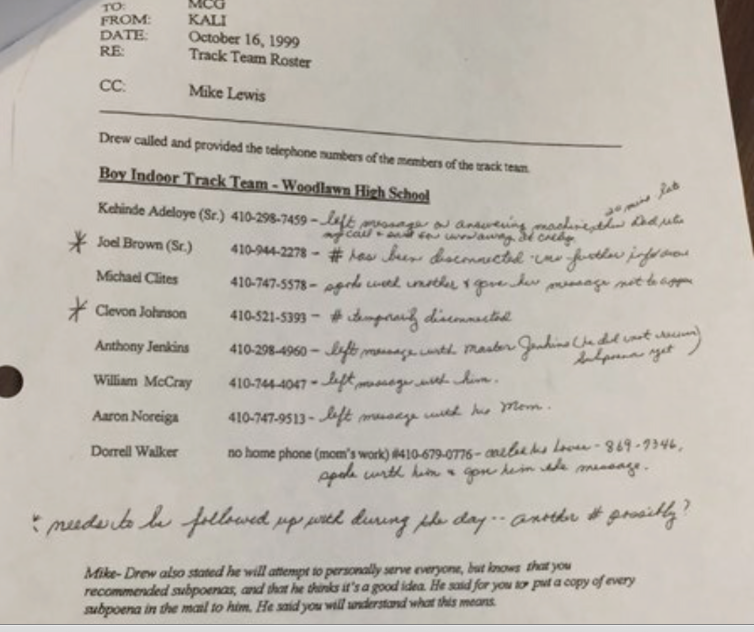 The notation in question is the one written next to the first name on the memo. It says something like, "left message on answering machine, then 20 minutes late Dad return my call and said he was away at college." This seemingly makes it clear that the teammate's father called the private investigator (or whoever wrote the note) 20 minutes after a message was left on his answering machine. It certainly in no way implies that the teammate said that Adnan was 20 minutes late to track practice on January 13, 1999.

Indeed, from what I've heard about the proceedings yesterday, it turns out that the teammate in question received a subpoena but was never contacted by the defense, leading to him showing up at court in 1999 or 2000, with no idea why he was there and no testimony procured from him.

But at least this teammate got his subpoena. Another tweet makes it clear that the defense introduced the yearbook page to show that the defense memo compiled by Gutierrez's law clerk/student came solely from a page in the Woodlawn yearbook that listed eight track members who medaled at a certain event. As such, (1) the defense was unaware of about 70% of the roster for the Boys Indoor Track team; and (2) the subpoena for Will was sent to Woodlawn High School because the law student failed to realize that he had already graduated.

Previously, I had thought that this entire case could have turned out differently if Will's subpoena had simply been sent to the correct address, but, based upon the fact that Adnan's other teammate received his subpoena but was never contacted by the defense, that now seems less likely. Of course, Will was not alone. The current defense private investigator was able to contact 41 people on Adnan's 83 person alibi notice from 1999; of the 41, 37 were never contacted and the other 4 were never asked about providing an alibi.

As a result, it's no surprise that defense expert David Irwin concluded that Gutierrez's performance "was well below the minimum required by Strickland."

Colin, as usual, you rock. I am afraid of "tomorrow's" lawyers if this is the kind of due diligence we can expect.

So the "20 minutes late" claim is just another lie that Thiru threw into the mix? How is that type of thing acceptable in a court of law?

It's disappointing that such an obvious note was misconstrued to mean something else. It's clearly only missing the "r"! Any educated person (lawyers?) should be able to see that

As soon as I saw this headline, I thought "Seamus is going to be *so* ticked". It made me giggle.

I can't believe you wouldn't try to crop off those stars, Colin. They are obviously the key to proving Adnan guilty.

You might take a closer look at the right edge of the document which looks like it has been cut off in the reproduction process. If so the word thought to be "late" could in fact be the word "later"

I understand Thiru was choosing not to enter a lot of things into evidence...can you explain the reasons an attorney would or would not enter things into evidence? And can the opposing side challenge this/get something entered themselves (even if it's something only the other side has referenced)?

Unrelated question - when will we get to hear more about the 'recently surfaced' document that may shed more light on the car saga? And how did it recently surface?

@EricWolff -- they are not rated by winning or effort at winning, that's how it's acceptable. They have NO penalty for being wrong. That's the perk of being the state. So they're going for the bucket of poo approach... Throw it all at the wall and see if anything sticks. So far, the only thing that remotely have a faint whiff is that irrelevant bit about how Rabia met Asia back in 2000 (which is irrelevant in the scheme of thigns)

I don't buy your reading Colin because I think the "20 minute late" language is ambiguous. It could really refer to anything. It's difficult for me to believe that someone would note that the call was returned 20 minutes later. How is that relevant to anything? Who does that? Also, the word is "late" and not "later". At the same time, it isn't clear to me that it relates to his appearance at track practice. I don't know what it refers to, honestly, and the only hope is asking the person who wrote it but I wouldn't trust their memory on such a pesky detail after all this time.

My view of that evidence: inconclusive.

Just an observation here. In looking at the photo of Gutierrez's memo, which is obviously a Xerox copy without the platen in place, the handwritten notes for the first three and fifth names appears to be cut off from the right, either in the duplication process, or in the original writing, as prone to occurring when 1) handholding an original on a copier platen incorrectly or 2) writing on a sheet with a stack of papers to the right covering the right edge. This seems like a relevant detail since this would be where the "r" would have appeared if the handwriting read "later."

Why is the prosecutor being so sleazy? It's almost like he has no facts that he can put forward so he's using misinformation and appealing to the emotion to put forward his case. Not a good example of being an administrator of justice.

How was this "20 minute late " actually put forward by the prosecution? Did they actually try and state this was a fact?

Why doesn't the defense call Kaliope to explain her memos??? She is right down the street in the mayor's office.

Do you have the original of this document? Would the state go so far as to "accidentally" cut off the 'r' from 'later', just to muddy the water?

I would like a detailed post on the incentive and accountability structure within DA's offices that makes them so averse to admitting a wrongful conviction. There is something seriously wrong here, because statistics show that it happens. But it seems DA's will do anything to save face, even of previous prosecutors, which seems irrational unless there is a built in pressure within the system to deny facts staring them in the face. Thanks.

Daniel - are you kidding me? She talked to the guy's dad... Why the heck would the dad say he was 20 min late to practice? That makes no sense. The only thing that does make sense is the interpretation that he called back 20 min later. In context that makes complete sense.

Beth-I was thinking the same thing! Lol. I'm sure he (she*) was, but using one of her myriad other sock puppets names instead .

Eric: The “20 minutes late” claim is certainly not supported by the evidence.

Cupcake: You would avoid entering documents into evidence if you knew they didn’t support your insinuations. The new document was in the State’s response to a different MPIA request. I’ll probably write about it at some point.

I agree with Richard above. the document above was cut off during reproduction,as you can see from the other notes. Also notable, the left side is also cut off. Why would both sides show that they were cut unless it was printed from a non-standard(extra wide) sheet necessitating the cuts. my guess is that the right side was INTENTIONALLY cut off to look like it said "20 minutes late". They obviously did nt talk to the student at all during the call. Damn liars.

Would love to see the original, rather than a copy of this memo. Is that possible?