It Comes Down To This: Gutierrez's Failure to Contact Asia McClain & Ineffective Assistance

There have been 12 episodes of the first season of Serial, 17 episodes and 16 Addenda of Undisclosed, 32 first season episodes of the Truth & Justice Podcast, and several other podcasts related to the Adnan Syed case, including Crime Writers On and Serially Obsessed. In the end, though, everything seemingly comes down to something that Sarah Koenig said in the very first episode of her groundbreaking podcast:

So I put that question to a few defense attorneys. And they said, well, alibi witnesses can be tricky, especially if it's just one person. Because then it becomes one person's word over another. A single witness like that can backfire under cross-examination. Or they might take the jury's focus away from the weaknesses in the state's case.

So there are conceivable strategic reasons why Christina Gutierrez might not have wanted to put Asia McClain on the stand. But what is inconceivable, they all said, is to not ever contact Asia McClain, to never make the call, never check it out, never find out if her story helps or hurts your case. That makes no sense whatsoever. That is not a strategy. That is a screw-up.

That's it. That's the case. The Attorney General's Office has indicated that it intends to call "attorney William R. 'Billy' Martin as an expert who will rebut Syed's claims that he received ineffective counsel when his trial attorney did not call an alibi witness."

You can find any number of cases in which an appellate judge found that defense counsel gave effective assistance by contacting an alibi witnesses and thereafter making the strategic decision not to call that alibi witness at trial. For instance, here is pertinent language from the opinion of the Supreme Court of Illinois in People v. Thompkins:

The defendant also argues that trial counsel was ineffective for failing to present alibi testimony from Barbara Thompkins, the defendant's wife. In an affidavit submitted with the post-conviction petition, Barbara states that the defendant “must have been home after 9:00 in the evening of December 22, 1980,” because that was the time when she would normally leave for work and the defendant drove her to work that night. In her affidavit, however, Barbara acknowledges that defense counsel spoke to her generally about testifying in this case. If Barbara related the possible alibi to defense counsel, then, as Strickland instructs, we should defer to counsel's decision not to present her testimony.

Conversely, when defense counsel does not contact a prospective alibi witness, the inverse is true. It has to be. Just last week, I wrote about a more recent Illinois case in which the judge found that the defense counsel was ineffective. Here is the pertinent portion:

Whether or not trial counsel would have called these witnesses to testify is irrelevant given that he never ascertained what they would say; due, in part, to his inability to interview them.

Readers of this blog should be familiar with this language. It's similar to language I have found in cases across the country, without exception. Those cases include the opinion of the Court of Appeals of Maryland in In re Parris W., 770 A.2d 202 (Md. 2001), and the Fourth Circuit in Griffin v. Warden, Maryland Correctional Adjustment Center, 970 F.2d 1355 (4th Cir. 1992).

In Griffin, which involved the same courts handling Adnan's trial and appeal, the Fourth Circuit cited Grooms v. Solem, 923 F.2d 88, 90 (8th Cir. 1991), for the proposition that "[o]nce a defendant identifies potential alibi witnesses, it is unreasonable not to make some effort to contact them to ascertain whether their testimony would aid the defense." As a result, the Fourth Circuit ruled as follows:

David did not even talk to Staples, let alone make some strategic decision not to call him. Strickland and its progeny certainly teach indulgence of the on-the-spot decisions of defense attorneys. On the other hand, courts should not conjure up tactical decisions an attorney could have made, but plainly did not. The illogic of this "approach" is pellucidly depicted by this case, where the attorney's incompetent performance deprived him of the opportunity to even make a tactical decision about putting Staples on the stand.

I expect Billy Martin to testify about all of the potential pitfalls with calling alibi witnesses and why he might not have called Asia McClain as an alibi witness if he were Adnan's attorney at trial. As was noted in the recent Illinois case, however, such testimony is " irrelevant."

Such strategic decisions can't be made until defense counsel has had somebody on their team contact the alibi witness to assess their credibility and viability. So, unless Martin testifies that he would have refrained from having anyone on his team contact the only alibi witness who covered the time frame for the murder laid out by the prosecution in its opening statement at Adnan's first trial, his testimony about trial strategy will be "irrelevant."

In fact, such testimony could be worse than "irrelevant" for the State because it could underscore just how easily Gutierrez could have discharged with her obligation to render effective assistance. Adnan's attorney laid this out in his Application for Leave to Appeal: 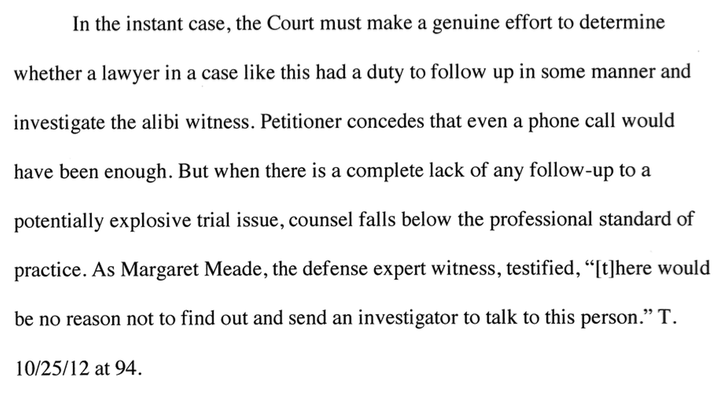 Here's a scenario. Asia testifies convincingly that she saw and spoke with Adnan at the library during the time that she has previously indicated, which puts her on record as a potentially significant alibi witness. She also testifies that no one from the defence team ever contacted her. Further, her statements withstand cross-examination. Assuming that the State has no previously unknown evidence to counter her claim that she was never contacted, and the testimony by State witnesses focuses on strategic reasons for not calling a witness (which, as you indicate, would be clearly irrelevant), why oh why would a judge take months to reach a decision? The Court has had ample time to review the relevant case law. If the facts are presented as described above, shouldn't a decision be obvious? Perhaps this is an area you can help non-lawyers understand. What factors would be present to account for a lengthy period needed to issue an order?

Is it possible for Gutierrez to have known the Asia story without officially having contacted her?

Let me put it more general: If a potential alibi witness speaks to someone (Mr. X), who then tells the lawyer this information, is it considered that the lawyer is now in contact with the alibi witness? Seeing that if the lawyer believes this Mr. X, he can already decide to not contact this alibi witness. I'm assuming here that Mr. X is not someone who works for the lawyer, just a worried citizen.

So are there cases where the relavant information is known without the lawyer having to officially contacted a potential alibi witness. It all just seems one word against another.

I'm not a US citizen or have any background in law, just interested in case. Great blog by the way!

Hi Colin, I am wondering why you view everything as coming down to the ineffectiveness claim? Do you see that as being much more promising than the cell tower Brady claim, or is it more about just not being able to assess the true strength of the Brady claim because you don't know how the state will respond to it? Thanks

Here's the thing: if Asia was so explosive a witness, why was there no agitation from Adnan's supporters over her non-appearance at the time?

I think Adnan has said CG told him she followed her up but it led nowhere. That statement from CG seems to have stemmed from her assistants confusing Asia with Aisha, which in turn appeared to arise from the ongoing implosion of CG's practice after her right-hand-man left in the June preceding the trial.

Does that still qualify as ineffective assistance? Or is it simply a mistake? Should Adnan/CG's feepayers have been more alert to this, or is it reasonable for him/they to simply have accepted her explanation the Asia alibi didn't work out?

I suppose the other aspect is the evidence in support for Asia actually seeing Adnan on the correct day. If nothing else, the various investigations have shown just how undependable witnesses' memories are for any given day.

Have you contacted Gutierrez's clerks to see if the Asia story was investigated?

streetwriter: In addition to the alibi issue, there is the cell tower issue, which will likely involve some more legwork by the judge and his clerk(s). For both, the judge wants to issue a well written and researched opinion that won’t be reversed on appeal. This case might be a bit unique in that it is an otherwise retired judge hearing just this case (for a second time). We’ll see.

Martin: I’ve never heard of a case where a judge rejected an IAC claim based on someone else giving an attorney reasons not to contact a prospective alibi witness.

Adam: I don’t think that the Brady/cell tower claim is any weaker. I just don’t have as firm of a grasp on the key issue with regard to that claim. I imagine it will depend a lot on the expert testimony.

Greencourt: Gutierrez told Adnan that Asia didn’t check out. So, presumably, Adnan and his family figured that someone on Gutierrez had contacted Asia and determined that she wouldn’t be a good alibi witness for whatever reason. Once Adnan was convicted and Rabia talked to Asia, it became apparent that no contact was made. As a result, they immediately fired Gutierrez.

And, yes, a mistake that leads to failure to contact a key alibi witness is IAC.

Seamus: My understanding is that Adnan’s attorney contacted the clerk who wrote the Asia notes, with the clerk authenticating his writing and saying that he would have given the notes to Gutierrez but that he had no further recollection of what happened with Asia. If neither the defense nor the State calls anyone from Gutierrez’s team, it seems safe to assume that none of them have a recollection of what happened with Asia, one way or the other.

Are you planning on writing a blog on the key parts of each day's hearing? We non lawyers need your clear-headed thoughts to stay on track.

Mary: Yes. I did just that this morning.

Posting here as other comments are full: Although state's objections were being upheld re. repeating testimony from previous hearing, will judge still take previous testimony into account when forming his overall judgment on IAC? i.e. can/will he consider testimony from the previous PCR hearing as well as this one?

Colin - since the comments are already full for today's hearing, I figured I would ask my question here. I have been following the social media regarding Asia's testimony, and the State's attempts to trip her up or admit that she wrote the March 2 letter much later, etc. My question is this - how is any of that relevant? Isn't the only relevant question whether Gutierrez contacted her or not? I suppose if she were to say she was never contacted, but she has no relevant information and no memory of January 13, then that would go to the prejudice prong, but isn't the simple fact that she offered an alibi in her letters and was never contacted enough to prove IAC?

Colin, since listening to Undisclosed, I've found the issue of lividity inconsistent with burial position to be the most compelling evidence for Adnan's innocence. Why has there been no mention of the autopsy in the current hearing? Is it because the law really doesn't have any clear way for this conflicting (and potentially overlooked) autopsy evidence to be used as grounds for overturning a conviction (while not contacting a key witness constitutes failure of counsel)? I'm repeatedly surprised by how little attention the autopsy seems to be getting outside the circle of Serial followers.