The Adnan Syed PCR proceeding was probably the first that many people followed via Twitter. But it's certainly not the only court proceeding to receive social media attention. Yesterday, a reader sent me information regarding the Timoty McVay case, which apparently contained interesting testimony about mixed lividity.

The State's theory of the McVay case was that McVay killed 29 year-old Carrie Olson at his house in Rock Hill, Illinois between 4:00 A.M. and 6:15 A.M. on December 28, 2013. According to the State, McVay then transported Olson's body to an isolated property less than eight hour later and put her in an awkward position, "with her arms above her head about 40 feet from the road in Hastings, Minnesota." Here are some tweets about the lividity evidence: 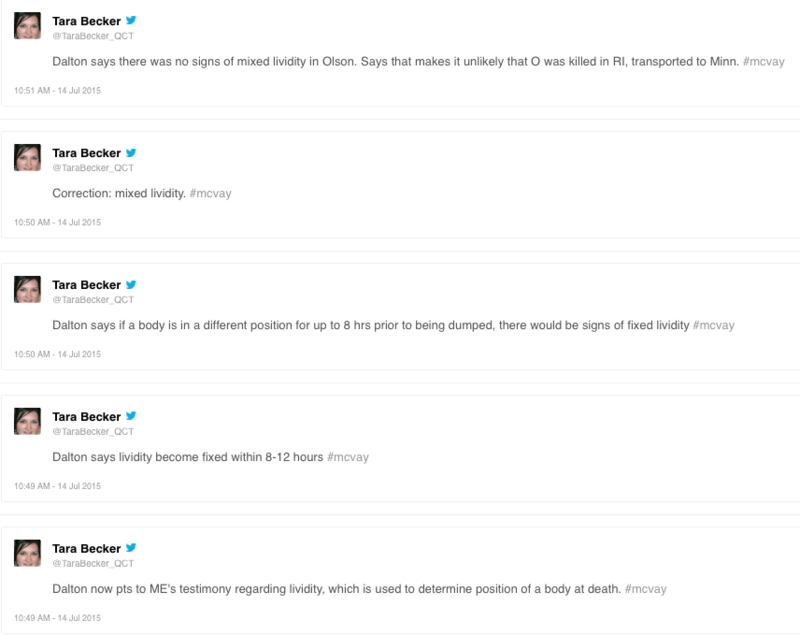 These were just some of the tweets by @TaraBecker_QCT about the case, and tweeting was also done by @WQADCaroline, who reported that the medical examiner was Owen Middleton, the Assistant Chief Medical Examiner for the Hennepin County Medical Examiner’s Office in Minneapolis, Minnesota.

You might recall that mixed lividity/dual lividity/second lividity is the process by which there should be two lividity patterns in a victim if the body is moved from one position to another position in the 8-12 (or so) hours after death and before lividity has become fully fixed. It's why medical examiners have said that Hae Min Lee could not have been "pretzeled up" in the trunk of her Nissan Sentra for 4-5 hours after death, followed by a burial in Leakin Park in the 7:00 hour.

Does the same apply in the Timothy McVay case? It's impossible for me to tell without knowing more about the case. As good as live tweeting can be for figuring out the basics of a case, there is no substitute for being in the courtroom or at least reading a transcript. What I do know is that, after McVay was convicted, he filed a Motion to Vacate Convictions and Dismiss, which contained the following argument:

Again, this seems like a pretty compelling argument to me, but I would love to see a transcript of the ME's testimony and the State's argument before drawing any conclusions.

This brings to mind the Lovelace case in Quincy, IL. It was tried around the same time as Adnan's reopened hearing and featured on 48 hours last night. Multiple accounts about the state of the body when emergency services arrived and the findings during autopsy have been brought into question, meaning the husband's timeline is questionable. Originally said no determinable cause of death. Police reinvestigated and some examiners of photos and the ashes from the cremated remains said she was smothered, but other experts disagree. First trial ended in hung jury and declared a mistrial.

So lividity was fixed consistent with the position the victim was found in, making it probable she was dumped within 2-3 hours after death, or else killed at that location? So much easier with a transcript. It's unclear whether Tara is correcting mixed or fixed in the second tweet.

This guy has the misfortune of sharing a name with the unabomber. I have to wonder if that influences people, even if it's just on a subconsious level.

Regarding the Lovelace case, the children say they saw their mother alive in the am then dad took them to school then he came home and found her dead. Multiple m.e.s including Michael Baden stated she was in full rigor when examined shortly after meaning she would have passed the previous evening. What do you think happened? All 3 children were interviewed 2 days later separately and all said they had seen her that morning.

Sakura- Not the unabomber, the Oklahoma City bomber. But the point is still the same.

Actually, Timothy McVay was the guy who bombed the Oklahoma State Federal Building. The Unabomber's name was Theodore Kazinsky if I remember correctly (Not going to google it, if anyone wants to verify they should).

Cathy my real name... I believe the children are mistaken. They are young and would obviously be distraught. Father's influence over the children would be a factor in memory.

Not the unabomber but the Oklahoma City bomber