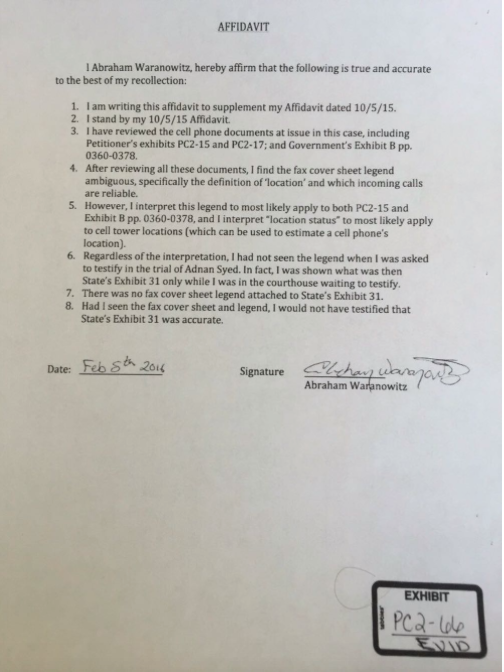 In any jurisdiction, this affidavit would have been tremendously important. Based upon the opinion of the Court of Special Appeals of Maryland in Wilder v. State, 991 A.2d 172 (Md.App. 2010), it might just be dispositive.

Let's start by rewinding back to 1999/2000. Abraham Waranowitz was an AT&T radio frequency engineer. In the fall of 1999, Waranowitz did a drive test with Urick, Murphy, and Jay, making outgoing calls and determining whether they pinged the same towers listed on Adnan's call log. Thereafter, he testified as an expert witness for the State on February 8-9, 2000. Urick first showed Waranowitz Exhibit #31, the State's cell tower exhibit, just before he testified; that exhibit did not contain the fax cover sheet indicating that incoming calls are unreliable for determining location. As Waranowitz makes clear in his new affidavit, "Had I seen the fax cover sheet and legend, I would not have testified that State's Exhibit 31 was accurate."

Now, as I've noted before, Gutierrez stipulated to the admission of Exhibit #31. Was this an unreasonable decision by Gutierrez because the State had turned over a copy of the fax cover sheet during discovery? Or is Gutierrez off the hook because Exhibit #31 didn't include the fax cover sheet or the page identifying it as a Subscriber Report? If it's the former option, Adnan has proven half of an ineffective assistance of counsel claim. If it's the latter option, Adnan has proven half of a Brady claim. In either case, Adnan would still have to establish prejudice.

This leaves us with the following question: What would have happened if Gutierrez did not stipulate to the admission of Exhibit #31 and instead showed the fax cover sheet to Waranowitz before he testified (e.g., as part of a motion in limine)? Waranowitz has now provided us with the answer to that question:  "Had I seen the fax cover sheet and legend, I would not have testified that State's Exhibit 31 was accurate."

This take us to Wilder. In Wilder, Aubrey Wilder was convicted of various charges of first-degree assault, reckless endangerment, and the use of a handgun in the commission of a crime of violence. At trial, the prosecution proved Wilder's movements on the day of the crime through certified cell phone/tower records introduced and explained by Detective Hanna:

And Detective Hanna took the information from the certified cell phone records and he plotted the towers on a map of the relevant area of Baltimore County, and the certified records show that the calls in question utilized those particular towers.

This testimony was allowed after the trial court rejected Wilder's motion in limine, which claimed that this evidence could only be introduced through an expert witness.

In addressing Wilder's ensuing appeal, the Court of Special Appeals of Maryland "recognize[d] authority permitting the lay testimony of a police officer with respect to cell site location." The court, however, disagreed with this precedent, concluding that "we believe that the better approach is to require the prosecution to offer expert testimony to explain the functions of cell phone towers, derivative tracking, and the techniques of locating and/or plotting the origins of cell phone calls using cell phone records."

Therefore, the court found that the cell phone/tower evidence should have been excluded because the State presented no expert testimony. Moreover, the court concluded that the error of allowing for the admission of this evidence was prejudicial because it "was used for the sole purpose of placing Wilder at or near the scene of the shootings at the Williams residence."

Let's now turn back to Adnan's case. Imagine that Gutierrez did not stipulate to the admission of Exhibit #31 and instead filed a motion in limine before Waranowitz testified. If she showed him the fax cover sheet, we now know that he would not have testified that Exhibit #31 was accurate. Unlike in some other jurisdictions, the State couldn't have then turned around and sought to introduce the exhibit through the testimony of someone like Detective Ritz or Detective MacGillivary. They needed an expert, and their expert, an AT&T radio frequency engineer, would have refused to say that the exhibit was accurate. Presumably, this also means that his drive test results would have been inadmissible, at least for those outgoing calls that were being used to make conclusions about towers pinged by incoming calls.

Now, I suppose that you could hypothesize that the State might have been able to scramble and find another expert witness to provide the foundation for the admission of Exhibit #31. Of course, it would have been too late for such an expert to do his own drive test. Could that have led to admissibility?

Probably not. In Keene Corp., Inc. v. Hall, 626 A.2d 997 (Md.App. 1993), an asbestos manufacturer appealed a trial court's ruling that the use of polarized light microscopy to identify asbestos fibers in undigested human tissue on stained slide was admissible. At a Frye/Reed hearing, the plaintiffs had presented testimony by Dr. Gerrit Schepers, who performed the testing, and Dr. Frank Haig, a professor of theoretical physics, who claimed it was generally accepted. The manufacturer countered with Dr. Grover Hutchins, a board certified pathologist, who testified that this technique was not generally accepted in the medical community.

According to the Court of Special Appeals of Maryland, this "battle of the experts" wasn't good enough because the burden of proof is on the party seeking to admit the evidence and "[t]here is nothing in the record that supports the claim that the Halls' experts were more knowledgeable than Dr. Hutchins."

Imagine that the State was able to scramble and find a new cell tower expert back in 2000. Unless the court found that this expert was more knowledgeable that an AT&T radio frequency expert, Exhibit #31 would have been inadmissible.

Out of interest, would it have been possible for the state to have argued for just the admission of the outgoing call evidence (if, say, Christina had received the fact sheet and had challenged it). - rather than the whole lot automatically being thrown out? Perhaps simply to argue the incoming calls were a (supposed) means of corroborating Jay's story, rather than to place Adnan at the burial site?

Do you have a perspective on whether Adnan's new trial might be granted without an appeal hearing in between?

If the judge rules in Adnan's favour, what grounds would the prosecution have for appeal? (Especially given the judge tended to sustain Thiru's objections).

So if the jury only relied on Jay's testimony, would have and could have adnan been convicted?

Why didnt CG supino the incomming and outgoing call log from the involved parts, like Jay, Stephany, Jen, and specially Don... I dont understand as this is so basics to be able to create a defense....

Is there any way to find out what if any deal was given/made with Jen? She still leaves me with a bad feeling.

Meg - certainly there couldn't have been an official plea deal with Jen since she was never charged with any crime. It's not clear whether she should have been charged with accessory after the fact or with perjury, but obviously neither one happened. I wonder if the state (if it's so inclined) could still file charges against her in an effort to put pressure on her to tell the truth. Speaking of which, one thing still bugs me (more than others) about Jenn's police interview. Besides the story about talking to Nicole in the car, she tells another story about telling another friend about Jay's story before Hae's body was found. Rabia's made a note on her copy of the transcript that the police never followed up on that lead. Has anyone ever turned up more info on this friend and found out what Jenn told her and when?