We're less than a week away from the reopened postconviction proceeding in the Adnan Syed case. One of the issues that the court will consider is whether Cristina Gutierrez's failure to contact Asia McClain constituted ineffective assistance of counsel. I've written numerous times about case law from across the country standing for the proposition that the failure to contact a known alibi witness constitutes ineffective assistance of counsel. The most recent example involves a case out of Cook County, Illinois.

In 1994, Edward Bolden was arrested in connection with a drug-related murder. Clifford Frazier, who was wounded during the drug transaction, identified Bolden as the shooter at Bolden's trial in 1996; Bolden has been incarcerated ever since.

Last week, however, Cook County Judge Alfredo Maldonado granted Bolden a new trial. One of Bolden's claims was that his trial attorney was ineffective based upon failure to contact three alibi witnesses. Here was Judge Maldonado's discussion of the law in this area: 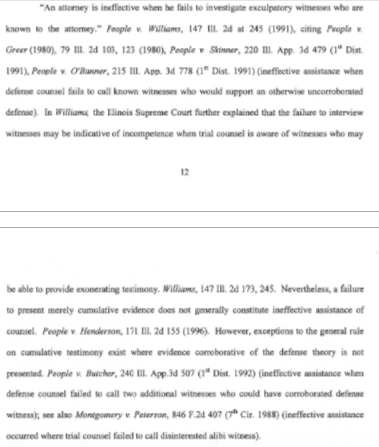 You might recall the Peterson case that closes this quote. It's the case in which the Seventh Circuit found that trial counsel was ineffective in contacting twelve alibi witnesses but failing to contact a thirteenth. I wrote about it here, and it's been cited by the Fourth Circuit, the Court of Appeals of Maryland, and Adnan's attorney.

Like in Peterson, Judge Maldonado found that Bolden's attorney engaged in reasonable efforts to contact two alibi witnesses, who claimed that they saw Bolden "playing video games at the J & J Fish restaurant, at 64th and Cottage Grove, before and during the shootings." While defense counsel never did end up contacting these witnesses, he did contact and call two other alibi witnesses from J & J Fish: Tanesha Gaston and Edna Williams. He did not, however, contact a fifth J & J Fish alibi witness: Todd Henderson. 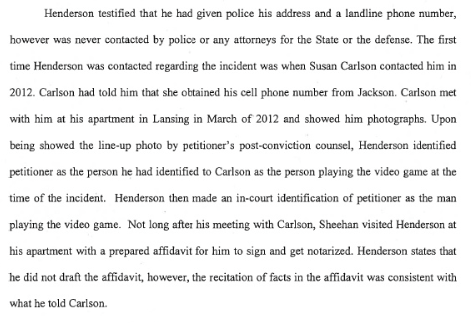 Notably, the versions of events given by Gaston, Williams, and Henderson differed slightly, but Judge Maldonado was comfortable with these inconsistencies:

What's also notable is that Judge Maldonado rejected trial counsel's argument that he might not have called the alibi witnesses after contacting them, concluding that trial counsel cannot make a reasoned decision against calling an alibi witness when he has not first contacted the witness to see what (s)he has to say: 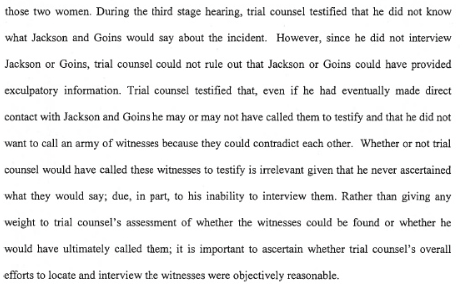 Readers will note that this is the fundamental issue at the heart of Adnan's current appeal: Whether Gutierrez could have made the reasoned decision not to call Asia McClain as an alibi witness without first contacting her. As in every other case I've seen, the Bolden case answers that question in the negative.

Glad to hear that Adnan is finally receiving a post-conviction hearing.
The thing that irritates me most about this case is the assumption that Jan 13, 1999 was the day Hae was killed. In reality, we don’t know that! We have no idea when she was killed – all we know is that it was some time between Jan 13th and Feb 9th, but we don’t know for sure what day (unless I missed something). I keep reading about it, and hearing people refer to Jan 13 as “the day of the murder”, which really bothers me because we just don’t know that for sure. Consequently, this entire case was built around that assumption (and some very shady testimony), and that’s just insane. I don’t know if Adnan is guilty or innocent, but I do think that he should NOT have been convicted on the evidence (or lack thereof) that was presented at his sham of a trial. Unbelievable. I hope the truth eventually comes to light, and justice is achieved for Adnan, Hae, and their families.