How Did the Detectives Know to Ask for Jenn on February 26th?

Over the last few days, I've done a couple of posts (here and here) about the evidence supporting the theory that the detectives were aware of Jay and possibly interviewed him (multiple times) before they interviewed Jenn on February 26th and 27th. In short, this evidence consists of (1) Jay's Intercept interview, in which he says he was already sick of talking to the police before they ever talked to Jenn; (2) Sis's statement to the defense PI, in which she says that Jay told her that he missed work on February 26th and February 20th, 21st, or 22nd, with Jay saying that at least the earlier interview was about Hae; (3) Neighbor Boy's statement to the defense PI about seeing Jay in a police car about a week after Hae's body was found (e.g., around February 16th); and (4) a police document in which (a) Jay's name is identified next to the account holder for a phone line, but (b) Jenn's name is not.

There's another piece of evidence that might also support this theory, depending on who you believe. 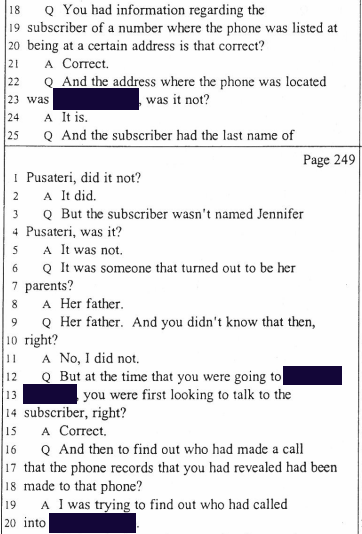 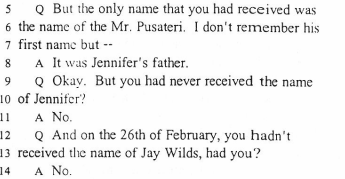 As we noted on Undisclosed, however, Jenn and Cathy tell a very different story. Here's Cathy testifying at trial about the detectives approaching Jenn and her on February 26th (2/16/00; pg. 265):

Now, maybe you believe that both Cathy and Jenn are lying and/or mistaken. In that case, you trust Detective MecGillivary's testimony, and there is no issue.

On the other hand, if you believe the version given by Cathy and Jenn, there seems to be a huge issue: How did Detective MacGillivary know to ask for Jenn? He himself says that he didn't get her name from the phone records and didn't even know that she'd gone to Woodlawn. The only reasonable explanation seems to be that he had gotten her name from Jay because they'd already talked to him.

*As with Nisha's testimony about Adnan visiting Jay at an adult video store, Urick cuts off Jenn MacGillivary when she's giving testimony that's seemingly harmful to the State's timeline. As with the Nisha interruption, I can't say whether this was intentional or not.

Colin,
Could it be possible that the detectives did an initial search (some time before the 26th) using Jay or Jen's phone numbers and Jay's police arrest report from 26/27th January popped up?
Jen was with Jay when Jay was arrested. Could it be possible that the name Jennifer Pusateri was on Jay's arrest sheet as someone that was with Jay at the time of his arrest?
So in short, the detectives did a search on the numbers they had to see if any of those numbers had any criminal activity linked to them. Jay's number may have popped up and the detectives learnt about the name JAY WILDS from that search. They see that Jay was arrested the previous month so looked up the arrest details and see that JENNIFER PUSATERI was with Jay at the time of the arrest. The police know the name PUSATERI as it was the account holder of the Pusateri phone number.
The police put two and two together and start with looking for Jennifer as the Pusateri phone number is seen as the most important to the detectives because this number is called numerous times on the 13th January (especially as it is called just before Hae goes missing and just after Hae goes missing).

Ben: Anything is possible, but MacGillivary himself testifies that the only Pusateri name he knew when he went to the Pusateri residence was the name of Jenn's father.

"Ben: Anything is possible, but" you do realize you're accusing Det. MacGillivary of 2 counts of perjury right? So many possible truths have been buried, covered up, unlabeled, mislabeled, lost, or erased because they weren't tracked down in a timely manner. That may be even worse than perjury in my book.

Maybe MacGilivary couldn't remember or maybe he didn't want to elude to the detail of how they found Jay - from his arrest report - as this isn't a great point to make for their star witness.

Jenn was talking to Lisa and Chris, her "friends in the BPD" about the case around the time Mr. S found the body. Perhaps Ritz and co.. talked to Lisa and/or Chris?

Karen: Jay did not have a telephone number in his own name.

Dan: I don’t know who to believe in this scenario. Cathy and Jenn could easily be mistaken or lying. Or MacGillivary could be mistaken.

Ben: Sure, he could be mistaken. In your latter scenario, he would be perjuring himself.

TJ: I would love to know more about Lisa and Chris.

Yes & i'm sure this case isn't without perjury.
Colin, separate question off topic.
Has it been confirmed that the police never subpoenaed Jen's home phone number?

My current theory is that the cops were speaking to Jay and getting nowhere - so they used Jenn to get to Jay and make him compliant. Once Jenn had said on the record that she was a witness to Jay being an accessory after the fact and possibly aware of Adnan's plans before Hae disappeared, Jay is now in line for a possible death sentence, he has to say anything the cops want to hear to try and save himself. The question that this leaves is what did the cops have on Jenn?

In Jenn’s recorded police interview, she mentions that about 2 weeks after finding out what happened to Hae, she told a friend of hers about it. This statement is right after Det. Ritz asks her if she or Jay ever called in a tip. That friend’s name is redacted on the document (p. 29). She claims she didn’t tell her Adnan’s name (she starts to say she did, then changes to say she didn’t say Adnan’s name). If this friend was the Feb 1 tipster, it would be the right timing (about 2 weeks after Jan 13th, when Jenn told this friend). Although, she then goes on to say that she might have told the friend on the same night they found Hae. Is this friend’s name now public?
Also, on page 31 of that document, Jenn states that she said something to “xxxx” because at this point “xxx” didn’t know. Are these two different people she’s referring to? Or the same friend?

I can't help thinking that Jen or Jay first doesn't change much. They were both among the numbers on the call log and Jen had no story to tell until she talked to Jay later.

briply: If Jenn or Cathy is the CrimeStoppers tipster, that would be big news indeed.

ben: I don’t know whether there was a subpoena.

Sue: It also leaves the question of why MacGillivary didn’t simply state this as the true chronology.

KC: I don’t see a redaction on page 31: https://www.splitthemoon.com/wp-content/uploads/2014/11/Jennifer-Pusateri-redacted.compressed.pdf

Lars: If it doesn’t change much, then why did the State go to such great lengths to hide the fact that Jay was contacted first?

It's page 31 in my viewer. I'm referring to actual pages 28 and 29.
https://www.splitthemoon.com/wp-content/uploads/2014/11/Jennifer-Pusateri-redacted.compressed.pdf

"Dan: I don’t know who to believe in this scenario. Cathy and Jenn could easily be mistaken or lying. Or MacGillivary could be mistaken."

Yet another conundrum! We can easily suppose that Cathy and Jenn, especially Cathy who seems to like being at the center of all the things, have discussed this little drama among themselves enough to create a new story. But also, MacGillivary might be simply mistaken, misleading for some unknown reason, or possible bending the truth a bit to make himself seem to have been a careful and cautious investigator.

Ben's other point is valid - if Jenn's last name and address show up in some other, related, search, then the MacGillivary would know her name but might not be eager to say why.

Difficult to believe that this is usual in a high-profile murder case. So much of the evidence and testimony is confusing and contradictory.

Colin: My point was that it doesn't give us any clues regarding the credibility of their storys, but I think you're right about it being important for the investigators to have a "clean" trail. If the police think it's important to hide that it started with statements from Jay, I can't understand why Jen gives a story Jay can't match in his interviews.

How about the crimestoppers tipster. He/she may have alerted the police to Jenn.

Lars: I think the reason Jenn can't match Jay's story could be the following scenario. Suppose Jay told whatever story he did without bringing Jenn's name up specifically, but the cops either show him the phone records or he's otherwise forced to say her name. Then the cops go to Jenn and she denies knowing anything about it. She and Cathy go talk to Jay and they all come up with a basic story. But they obviously can't anticipate every question or detail that the cops are going to ask about. So after they actually interview Jenn and she tells her story, perhaps it does happen the way the cops said. They interview Jenn while Jay is working, and then they go pick him up so that Jenn doesn't have a chance to tell him what they asked her. He tries to stick to the story they concocted but gets some of the details wrong and doesn't know her answers to all the questions. Later, they can't change their stories too much because they already have them on record.

Hey Colin! Great posts, particularly the one a few back on guessing what will happen at the hearing. This question is not really related to these topics, but I'm not sure where it goes. In the Order setting the hearing date, the Judge set a status conference for this week. Do you know if that conference will be a public face to face hearing and if it's still on schedule? It also required Adnan and the State to exchange disclosures on expert and fact witnesses by now. Do you know if those disclosures have been made and whether they will be posted anywhere that we could see them?

Colin hello! I am way late in asking this question. But I am so confused...how would Jenn and Jay know about the plan to kill hae days before it happened if adnan didn't tell them??? Help

Kim — Simplest explanation would be that Jenn and Jay didn’t know about any plans to kill Hae days in advance, period. That detail, like pretty much every inconsistent detail in their collective story, came about from the detectives asking questions about events that only occurred in their collective imagination, where logic tends to fall apart after being prodded repeatedly on the fiction’s amorphous details.

Jenn was trying to help Jay out based on what Jay said would help him out. She never understood why telling a story where Jay is involved in the crime would help him out, but he assured her it was the only chance he had to stay out of prison. Why? Because JAY AND THE POLICE HAD ALREADY BEEN TALKING FOR A COUPLE WEEKS, AND JAY WAS ELBOW-DEEP IN THE SHIT ALREADY.

This is why the detectives, in preparation for trial with an keen (perjury-tolerant) eye on strategy, made the decision that they would have to switch up who they’d say they talked to first. By lying and saying they talked to Jenn first, it dramatically improved how credible both Jay and Jenn appeared to the jury on the whole, QED.