Even More on the Hair Analysis in the Adnan Syed Case

This is the third in a series of posts about the hair evidence in the Adnan Syed case (prior posts here and here). This post deals with the defense's motion for a Brady hearing on the hair evidence and the judge's denial of that motion.

As I've noted previously, the State initially turned over Sal Bianca's hair analysis report on December 2, 1999, days before Adnan's trial. This report concluded that none of the hairs recovered from Hae's body were consistent with hair samples taken from Adnan, i.e., he could be excluded as the source of all the hairs. It wasn't until December 30, 1999, weeks after Adnan's first (mis)trial, that the State turned over an Amended State's Disclosure, which indicated that Hae could be excluded as the source of two of the hairs recovered from her body.

This (and non-disclosures connected to Jay) prompted the defense, on January 7, 2000, to file a motion for a Brady hearing. Here's the portion dealing with the hair evidence: 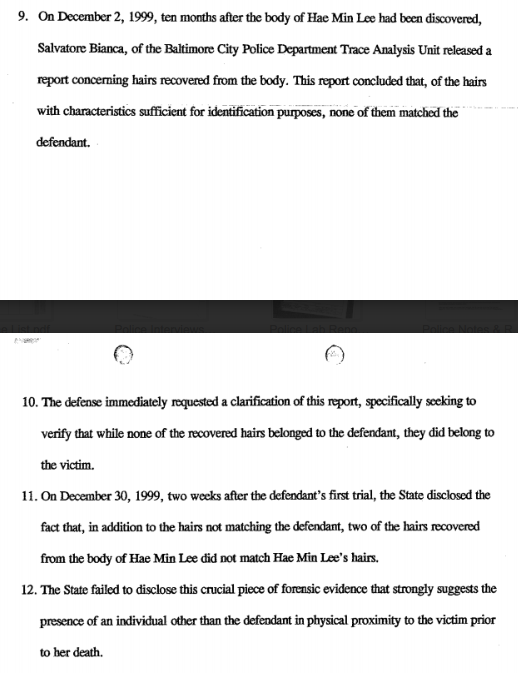 The judge, however, denied this motion for a Brady hearing. Here is the relevant part of her opinion: 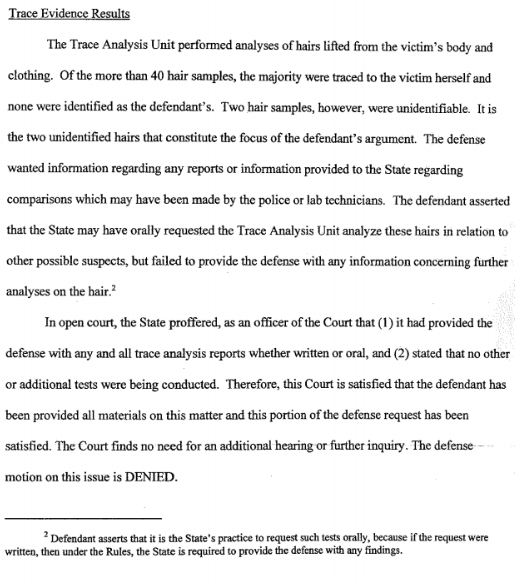 You can see why the judge ruled the way that she did. After all, if the State says that it has disclosed everything that it has on a subject, the judge will normally take the State at its word. On the other hand, you can see why the Gutierrez filed her motion. The State pretty clearly violated Brady by not disclosing the information about the two hairs until weeks after the first trial, and the State also had its persistent practice of having its experts not record their findings to avoid discovery.

Then, of course, there's the issue of the State's seeming disinterest in actually determining who killed Hae. Here, you have no hairs from the defendant on Hae's body, two hairs that didn't come from Adnan or Hae, and multiple other alternate suspects. And yet, the State does not get hair samples from any of these alternate suspects to compare against these hairs.

The disinterest in actual justice is disheartening. They wanted the case closed and someone convicted. They didn't care in the slightest if it was the right person. A tragedy on many levels.

Marvin - in my opinion, their interest in finding the right person ended after Adnan was arrested. With the community backlash they potentially faced if it turned out they had arrested him erroneoulsy, they felt it necessary to pull out all the stops to convict (or at the very least blame an acquittal on "some sort of technicality"). If there are two things I have learned from Colin and the Undisclosed team it's that:

1. The police and prosecutors typically used many shady methods to tilt the scales of justice in their favor when trying cases like Adnan's

2. They went above and beyond their normally shady methods in order to convict Adnan in particular.

And don't forget about the 3+ hairs found in Hae's car, and the hair found in the body bag, that were never tested. Found, recorded, and then never mentioned again.

Plus why did they bother to get a warrant and obtain a head hair sample from Jay, if they were never going to use it?

where are those hairs now?

Susan, what's the likelihood that they did test the samples you mentioned, and following suit, did not right and or disclose the report.

The underlying problem is that we just don't know why the hairs were "unidentified". Sometimes the issue is that the hair sample can be so degraded that it cannot meet the necessary scientific tests. So it could be that the state did try to test them but the results were null.

Could the hair issue be re-entered for Brady at this point?

I'm glad that forensics is starting to turn around since the late 90s.

Colin, is the defence able to request their own analysis of such evidence if the state does not appear to be forthcoming? Or is this not allowed?

Desire - the thing is though, rather than being irritated by Tina they should have been worried for her There are times when she is literally incoherent, and nothing happens. I have experience with schizophrenia, I have only heard word salad as bad as hers when someone was floridly psychotic, with no self-awareness or orientation to time or place. Nothing happened. Nobody took her aside and asked if she was OK, it would appear that nobody wondered why a fiercely intelligent woman, a dynamic defence lawyer known for her skill at exonerating even the obviously guilty, was a babbling, confused mess.

The State, I believe, took advantage of her instability and obvious illness.