Did Gutierrez Perjure Herself By Saying She Saw Adnan's Case as a Victory Because She Saved Him From Death Row?

Over the last week, Audioboom released a series of Recording in Progress minisodes because we didn't record a new Undisclosed episode during Thanksgiving week (we will have a new episode tonight). The minisodes deal with the role of social media in the news, and I've been thinking a lot about the crowdsourced nature of our investigation as Season 1 winds down. As you might recall, a listener first informed us of someone claiming the $3,075 CrimeStoppers tip in the Adnan Syed case, which we were later able to confirm through written documentation from a source at CrimeStoppers. And now, a listener, pointlesschaff, has passed along a huge piece of information that could lead to Adnan being granted a new trial.

That information comes from the Merzbacher case we discussed on the Tina episode. You might recall that this is the case in which Cristina Gutierrez allegedly failed to pass along a plea agreement to her client; the deal called for 10 years incarceration, a substantial discount over the four life sentences that Merzbacher got after trial. The state PCR court denied Merzbacher relief, concluding that Gutierrez perjured herself when she claimed that she failed to pass along the plea agreement to Merzbacher. The United States District Court for the District of Maryland, however, later granted Merzbacher habeas relief, concluding that she had failed to pass along the plea deal, which constituted ineffective assistance of counsel. But the district court was eventually overruled by the Fourth Circuit, which acknowledged that Gutierrez's performance was deficient but determined that Merzbacher wouldn't have accepted the plea deal even if he were told about it.

I had previously only read the Fourth Circuit's opinion, but our listener noted two important points in the district court's opinion, one of which I will discuss in this post. According to the opinion,

In the initial set of hearings, [Assistant State's Attorney] May offered evidence of Gutierrez's experience. She demonstrated that Gutierrez tried hundreds of cases and often dealt with plea agreements. She highlighted that Gutierrez could not recall any other time she failed to communicate a plea agreement appropriately. (06-516, D. 4, Ex. 13, pg. 51-53). The dubious inference being sought is that such an experienced lawyer would never forget about a plea offer. Id. at 41-42.

May also tried to show that Gutierrez testified inconsistently about the type of sentence one of her former clients received. Gutierrez testified that none of her clients ever received a life sentence at one point, and then later she was forced to amend that statement. She clarified that one of her clients did receive such a sentence, but that she categorized that sentence as a victory because he could have received the death penalty. (06-516, D. 4, Ex. 13, pg. 23). This minor discrepancy, later corrected, hardly suggests that Gutierrez is a perjurer. Notably, the post-conviction court did not rely on such evidence in concluding that Gutierrez perjured herself.

I would argue that the court could have relied on such evidence to conclude that Gutierrez perjured herself. The initial set of PCR hearings in the Merzbacher case commenced on Halloween, 2000. Roughly eight months earlier, Adnan had been convicted; he was later given a life + 30 sentence. This leads to three important conclusions.

First, Adnan was apparently Gutierrez's only client (other than Merzbacher) to be given a life sentence. Second, unless Gutierrez had forgotten about her case that ended a mere eight months ago, her last major case, she initially perjured herself when she testified that none of her clients ever received a life sentence.

Third, there was indeed a "minor discrepancy," but it didn't come in the form of Gutierrez's corrected testimony. As we reported in Episode Seven of Undisclosed, Adnan was initially denied bail because the judge didn't realize he was a minor, with minors being ineligible for the death penalty in Maryland. Adnan's original attorneys caught this issue and first challenged the denial of bail. Later, after taking over the case in April 1999, Gutierrez continued to press the issue, making reference to Adnan mistakenly being listed as death eligible in her filings: 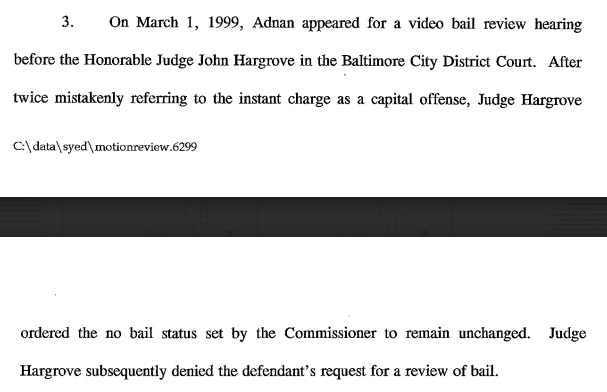 Excerpt from Gutierrez's Motion for Review of No Bail Status

Moreover, this isn't an issue that went away. Gutierrez continued to push it even after Adnan's mistrial in December 1999. The Motion excerpted above was filed December 20, 1999, and the issue was still live in January 2000.

Given these facts, it's really difficult to construe Gutierrez's claim that she viewed Adnan's "sentence as a victory because he could have received the death penalty" as anything other than perjury. She must have known that Adnan was death ineligible and that he got pretty much the worst sentence that he could have received. And she was also fired.

What does this mean in terms of Adnan's current appeal? I think it's a pretty major finding. A big part of Adnan's claim is that Gutierrez lied about investigating his alibi defense when no such investigation had been done. Given this pretty clear evidence that Gutierrez perjured herself about Adnan's case mere months after his sentence strongly supports giving Adnan relief on his current claim of ineffective assistance of counsel.

Can this information be used in Adnan's new hearing? I understand the scope is fairly broad but is it broad enough?

Could this be an indication, not of perjury, but rather of a steep cognitive decline?

Micheal, I think it was both. What started as a minor problem in her youth and Bar evaluation was magnified by her cognitive decline during MS. I think she did know that she was in the wrong, but lacked the inner ability to judge her own actions as spiraling out of control. Colleguues tried to tell her, and distanced themselves but she wouldn't listen, likely not able to put two and two together anymore. Thank god one of them finally called for her to be examined by the courts, leading to her resignation.

To further what Megan said, I agree it was probably both. When she was on top of her game, she could play fast and loose with facts and walk the fine line between very questionable tactics and outright lying/cheating (or at least be given the benefit of the doubt by judges when she was called out for her shady tactics). In other words, she was the mirror image of the prosecutor in the Anand's trial.

As her faculties diminished, she was not longer able to cover her tracks and explain away her career practice of shooting from the hip and playing fast and loose.

Please describe what it actually means to perjure oneself in terms of witnesses, counsel and prosecution?
I always thought it was a big deal that could throw out testimony, but looking at this case it seems like witnesses and prosecutors can perjure themselves left, right, and center without consequence.

How does Gutierrez perjuring herself in a different case have any bearing at all on Mr Syed's current appeal?

Mary: Quite possibly. We need to get the record from the Merzbacher case to confirm things.

Anon: Perjury means that a person intentionally lied under oath. You can be prosecuted for perjury.

Erin: If I’m right, she’s perjuring herself by testifying falsely about the quality of her performance at Adnan’s trial. That seems pretty pertinent.

IIRC didn't Adnan ask her to negotiate a deal with the State, but she lied and said that the prosecution refused to negotiate?

If so then this is 1:1 with the Merzbacher scenario.

> Over the last week, Audioboom released a series of Recording in Progress minisodes ...
> The minisodes deal with the role of social media in the news

Those minisodes are not available at the audioboom link.
How can they be found? (There don't seem to be links via twitter or elsewhere.) Can you provide links? Tks

I recently read in Brian Stevenson's Just Mercy that "In June 2012 [the Equal Justice Initiative] won a constitutional ban on mandatory life-without-parole sentences imposed on children convicted of homicides." He then went on to explain how two offenders who they were representing were "entitled to reduced sentences that would give them a 'meaningful opportunity for release.'" Would this not have applied to Adnan since he was arrested when he was a minor, or does it only apply to convictions received when a minor?

Will Crimestoppers reveal the tipster?

>> Over the last week, Audioboom released a series of Recording in Progress minisodes ...
>> The minisodes deal with the role of social media in the news
>
> Those minisodes are not available at the audioboom link.
> How can they be found? (There don't seem to be links via twitter or
> elsewhere.) Can you provide links? Tks

Please tell me if those minisodes are available anywhere?
(They were never findable)
Tks