Next week's episode of the Undisclosed Podcast will deal with the case that the State presented against Adnan Syed. Preparing the episode got me to thinking about how the State prepared its case. In a prior post, I included an Amended State's Disclosure in which the State notified the defense of potential witnesses it might call at trial who were not included in prior disclosures. Some of these witnesses, such as Detective O'Shea and Young Lee, were eventually called at trial. Others, such as Mark Pusateri and Ann, were not called as trial witnesses. Today, let's look at another Amended State Disclosure and the witnesses whom the State did and didn't call.

On August 23, 1999, the State filed the following Amended State's Disclosure: 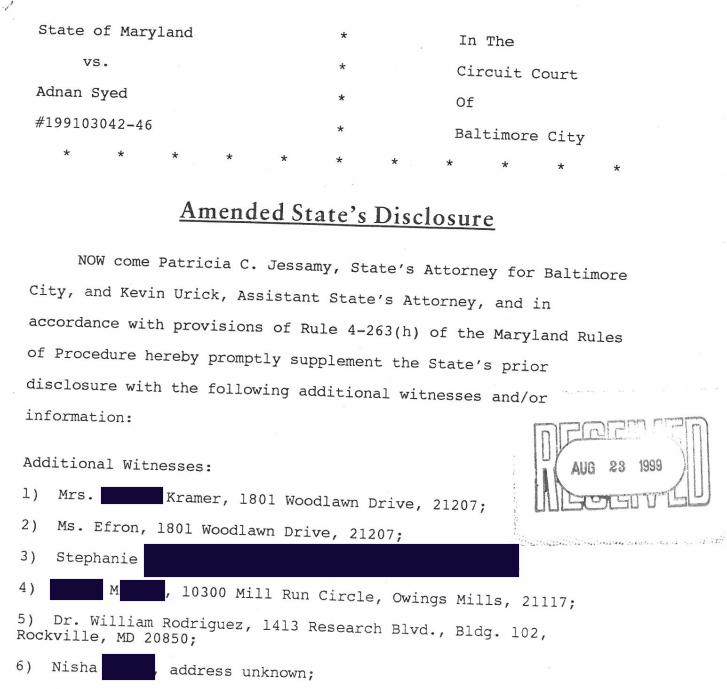 Only two of these witnesses were eventually called at trial. Dr. William Rodriguez was the Chief Anthropologist of the Armed Forces Institute of Pathology, and he testified about the disinternment of Hae's body.

Nisha, of course, was the girl that Adnan met on New Year's Eve and the 3:32 P.M. call on his phone log. The notation "address unknown" next to her name is odd. As far as I can tell, she is the only witness with such a notation by her name. What makes this even odder is that Nisha was, again as far as I can tell, the only State's witness interviewed at her home. Here is the relevant portion of the Progress Report on the interview:

So, how is Nisha's address unknown if she was interviewed at her home, with her address listed prominently in a Progress Report? And why are the notes from Nisha's interview dated April 1st when the progress report says the interview was on April 9th? 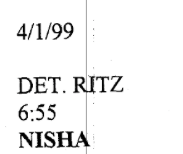 And why does Gutierrez's legal services contract with Adnan mention an interview between Ritz and Nisha at her home on March 13th at 7:30 P.M.?

As usual, there are more questions than answers. Was Nisha interviewed once? Twice? Thrice? How many of these interviews were at her home? Were the notes/transcriptions of some of these interviews never turned over? Were they lost? Does this explain why Nisha's address is listed as unknown? I wish I knew.

Next, let's look at the four witnesses who were not called. The first was Ms. Kramer, who taught both Hae and Adnan. I discussed her a bit in this post about "Takera." I can see why she wasn't called; she didn't really advance the State's case and was married to a Baltimore Homicide Detective, creating possible impeachment issues.

The second was Ms. Efron, the A.P. English teacher. Again, she really didn't seem to have any information to help the State's narrative.

The third was Stephanie, Jay's girlfriend and Adnan's best female friend. I know that a lot of us wish that she had testified, but you can see why both the prosecution and defense wouldn't have wanted to call her. She could just as easily have hurt the State's case as helped it.

The fourth was "M," Don's manager at the Owings Mills LensCrafters and the live-in partner of Don's mother. As with many of the other adult witnesses, her listed address is her workplace address (Owings Mills Mall). If her address were her home address, I wonder whether Gutierrez would have realized that she lived with Don's mother and made an issue out of it. I also wonder whether the State was aware of her relationship to Don back in 1999/2000. If so, you can see why the prosecutors would have refrained from calling her.

Of course, they might have just decided that she wasn't necessary as a witness. She basically would have been a witness who could have corroborated Don's alibi, and the prosecutors could have thought that his alibi was strong enough on its own. As with Stephanie, I'm sure that many people wish she were called as a witness, and I have no idea whether she would have helped or hurt the State's case.

Why was it noted that Nisha was a Hindi and why was she asked questions about Islam?

How much of these omissions/inconsistencies are "normal" for the Baltimore PD? From the podcast and other blog posts, it seems like the whole department is full of errors that could very well have put many innocent people behind bars, perhaps including Adnan. I am in no way familiar with the legal field, but in addition to the State's failures, is there a system of checks and balances that failed as well? Does that burden fall on the defense and therefore would support the claim of ineffective counsel?

There's enough reason to doubt the Nisha call that her value as a witness is moot on both sides. If Jay had the phone it was a butt dial. If Adnan and Jay were together then he likely wasn't off killing Hae and then casually calling is next girl. It's a useless marker for a case that comes down to a lot of other and better reasons to doubt That Adnan killed Hae

Nisha was noted as being Hindu because the detectives were fixated on an Islamic-rage theory. We know this from the Islam memo that they solicited and received, the bail proceedings, and ultimately Urick's opening statement and trial strategy.

The truth is that neither Nisha's nor Syed's religions were of any relevance to the facts at all. But the detectives were thoroughly confused by these brown and Asian people with Indian, Pakistani and South Korean names. They were flailing their arms with confusion, and the Islam story suddenly clarified facts for them, in their uncultured and uneducated minds. The rest is history.

FH - Colin can probably answer this Q better, but based on everything the Undisclosed team has uncovered I would say that many of these "issues" with the investigation/prosecution of Adnan were standard operating procedure for the Baltimore police and state's attorney's office at the time. And some were not. Some were so unusual that there was clearly an extraordinary effort made to convict Adnan specifically. My question is: why?