I've remarked before about Cristina Gutierrez's overuse of law clerks/students in her representation of Adnan Syed. Among other tasks that Gutierrez delegated to these law students, she assigned the task of reviewing many of the witness statements in the case and providing summaries. The implication is that Gutierrez did not herself read these witness statements and instead relied upon secondhand accounts by law students who might have missed key facts or misstated what a witness said. In this entry, I will post one of these summaries.

This summary is a summary of the witness statement given by Ja'uan Gordon on April 20, 1999. You might recall Ja'uan from Serial. He was Adnan's friend, and he told police that Adnan and he once smoked weed in the same side Best Buy parking lot where Jay claimed (but no longer claims) that Adnan killed Hae.

Ja'uan was not, however, called as a witness at trial, which makes sense given the foregoing summary. Ja'uan said that he had no recollection of January 13, 1999, and he told the police that Adnan was initially upset by his breakups by Hae but that he had started being with other girls by the 13th and seemed over the breakup. In other words, Ja'uan didn't seem to have much useful information, which might partially (but not fully) explain why his interview wasn't summarized until well after Adnan's first mistrial, on January 21, 2000. Here's the summary: 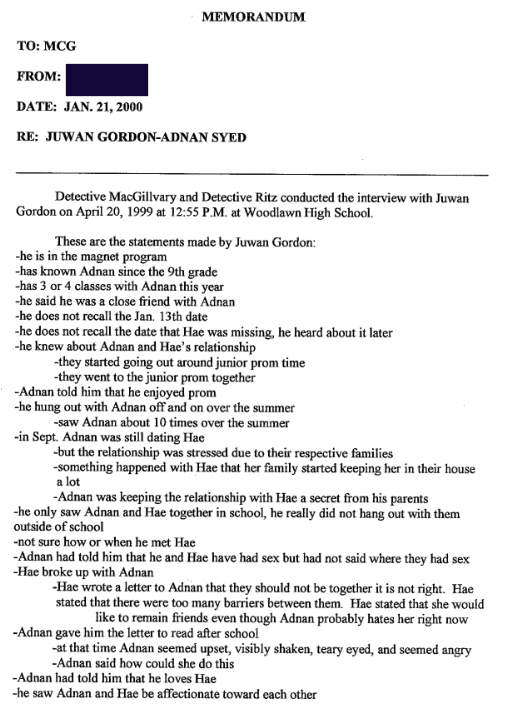 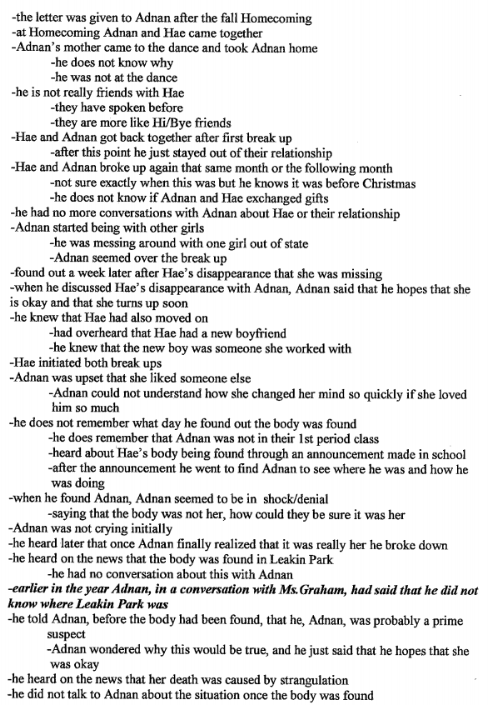 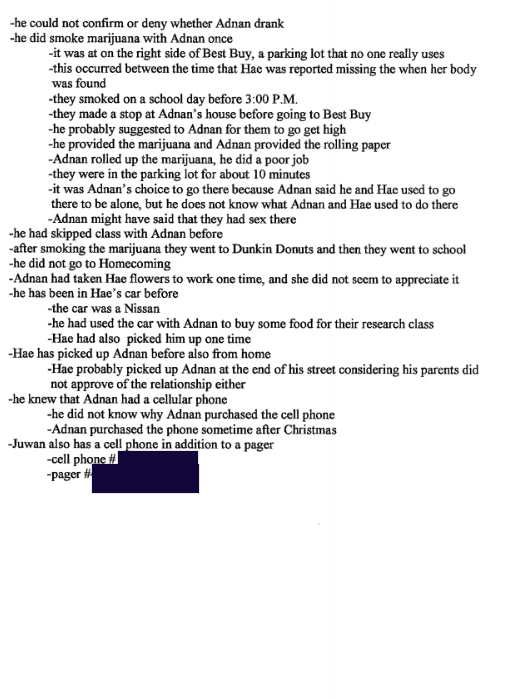 [Update: It looks like we have another Exhibit #31 situation. Here are the MPIA pages covering Ja'uan's interview(s). The first page is the cover sheet for Ja'uan's 4/20 interview. The second page is the Progress Report indicating that Ja'uan was interviewed on 4/20. The third page is a single page of handwritten notes from the 4/20 interview.

Pages 4-12 are then typed notes from an interview, and pages 13-16 are handwritten notes from an interview. These 16 pages thus give the impression of all being from the 4/20 interview. It seems, however, that pages 4-12 and 13-16 are actually from Ja'uan's 4/9 interview, with the first page of the typed notes (ostensibly indicating that they are from the 4/9 interview) apparently missing from the file. Therefore, it would seem as if the State's notes pertain to Ja'uan's 4/9 interview, which was not transcribed or recorded. Conversely, it would seem as if the clerk's notes pertain to Ja'uan's 4/20 interview, which was recorded and turned over to the defense. At least, I now think that's what happened. Once again, the State's record keeping makes it difficult to say anything with certainty.].

Isn't this three days after the January 18, 2000 Amended State's disclosure in which Ja'uan's interview was first disclosed to CG? Do you think the law student missed something relevant in the interview?

Are these notes full and unedited? (Aside from the blackouts, of course.)

What's the relevance of this summary? Is something missing that would have been useful to the defense? Is the bolded and italicized portion your emphasis? In other words, what conclusion are you drawing here? Do I need to go back and refresh my memory regarding what Juwan said during Serial?

Is this the whole summary? Was their anything about Adnan asking Asia to write a letter as documented in the police notes?

Do you have an audio recording of this interview? Have you listened to it?

Jane: These notes are full and unedited apart from the redactions. I don’t think the clerk missed anything relevant in the interview. As you note, this was a very late disclosure by the State without any (seeming) justification.

Steve: I just posted this summary because a commenter asked me to post it. I don’t think there’s anything huge here that the clerk missed, but I do think that significant things were missed in other interviews, like the interviews of Debbie and Becky.

TJ: This is the whole summary.

monstimal: There is no audio recording or transcription of this interview.

8thTYRANT: This is a summary of a summary.

Very interesting. Is it possible to see the summary this summary is drawing from? To sort of follow the trail and see if any information was diluted as presented to CG?

Given you're sharing information from a defense file, can we assume that you have an attorney-client relationship with Adnan? If not, can't the prosecution subpoena the defense files as privilege has been waived by sharing them with a third party, i.e., you?

Colin, I think you missed my point. In your post, you said that CG waited until after the mistrial to direct a law student to do this summary. In reality, she directed a law student to do the summary within days of the disclosure to the defense. (And, as an aside, in your view, the interview contained no exculpatory information, so the State had no duty to disclose it at all. Thus, the lateness of the disclosure is pretty irrelevant.)

How can you claim that there's no audio recording of the interview when it's indicated three separate times in the police file that the April 20th interview was recorded and that it was still being held in evidence as late as 04/17/2014?

8thTYRANT: It’s somewhere in the files, but I believe it’s been posted elsewhere on the internet.

Steve: Given that Adnan is pursuing an ineffective assistance of counsel claim, all of the typical waiver rules would seem to apply.

Jane: I wasn’t criticizing Gutierrez for waiting to have her clerk summarize the interview. I was criticizing the State for not turning over the summary of Ja’uan’s interview until well after Adnan’s mistrial. I don’t know whether the State made an audiotape of the 4/20 interview or turned it over. All I know is that the State’s notes from that interview are in the defense files and the MPIA files and yet there is no copy of an audiotape.

SwallowAtTheHollow: As I noted to Jane, the State has never produced an audiotape of the 4/20 interview. If one exists, I would love to hear it.

Didn't they play the audio from Jawan's interview on Serial?

anon: It looks like you’re right. They did play some audio of his interview on Episode 5. I guess that means they turned the audio recording over to Serial but not to us or Adnan’s current attorney (not sure about Gutierrez). The same happened with the audio recording of Debbie’s police interview. It was turned over to Serial but not us or Adnan’s current attorney. It also either wasn’t turned over to Gutierrez or she completely dropped the ball by failing to address Debbie’s statement about “Takera” at trial.

Maybe someone out there could convince the State to turn over these recordings because I really want to sort out what Debbie said that was transcribed as “rustling the basketball.” Unfortunately, the Serial team has said its their policy not to turn over anything they received. Luckily, MSNBC was able to get us copies of the burial photos so that we could confirm the problems with the lividity evidence because that was another key piece of evidence shown to Serial but not us.

As we noted on a recent Addendum, the State recently gave us a few new documents (like the solvability score document), so hopefully this evidence turns up at some point.

"Unfortunately, the Serial team has said its their policy not to turn over anything they received."

How did Susan Simpson get the police file?

Seamus: Susan, Rabia, and I have the MPIA file that Justin got from the State. Serial got additional things, like the Debbie recording, that they didn't turn over.

Eric: I'm not a huge fan of the policy.

Colin, if the state refuses to provide this material, can Justin issue a subpoena for it from them -- or from Serial?

Ananee: Probably at some point if the current appeal is unsuccessful.

Are you seriously stating that you think Urick signed an Amended State's Disclosure that said it "attached....a copy of the taped interview" under discussion, then actually failed to attach that tape? Why in the world would anyone do this? Isn't it more likely that it was removed from the file (or at least lost) at some point in the intervening 15 years? Likely the Debbie interview too. It's a kind of serious breach of ethics (and common sense) that you're alleging Urick committed.

johan@johan.com: I was actually trying to give the State the benefit of the doubt. Ja’uan’s interview was on April 20, 1999. If the State’s disclosure on January 18, 2000 was actually handwritten notes that were turned into typed notes, I could imagine someone dropping the ball and not typing up the notes for 9 months. If the State’s disclosure on January 18, 2000 was simply the audio recording created 9 months earlier, what explains the State failing to disclose it in the intervening 9 months, which included Adnan’s first trial? In other words, I hope that the State incorrectly described its January 18th disclosure because it makes the State look less bad.

This latter worry was the point of my post. We know that (1) Becky said in her police interview that she saw Adnan and Hae walking in opposite directions at the end of school, with Hae saying she couldn’t give him a ride home because she had “something else” to do; and (2) Gutierrez did not ask about this at trial. And we know that (1) Debbie said that she recalled Takera and no one else asking Hae for a ride on 1/13, with Hae responding that she couldn’t give anyone a ride; and (2) Gutierrez did not ask about this at trial. It certainly seems plausible to me that some of these omissions could have been the result of Gutierrez herself not looking at the source material and instead relying on law clerk summaries.

Why does this make the State look bad? They had zero obligation to turn over the Ja'uan interview because, by your own admission, it is not exculpatory, is not impeachment material, and the state did not call ju'uan as a witness. Not sure why they turned it over, but they did.

Jane: I don't know about the discovery status of the interview, but I would find it strange for the State to decide to turn over Ja'uan's interview between trials if it thought it had no obligation to do so. It wasn't really in the business of doing that in this case.

Here’s what’s troubling. Over the past few months you’ve said the defense file is missing any timeline of Adnan’s day written prior to 7/13/99, Drew Davis’ report on his visit to the school to confirm Adnan’s alibi in early March ‘99, and Ja’uan’s interview where he mentioned Adnan asking Asia to type a letter for him. In other words, all the evidence that would either confirm or disprove the Asia story is absent. This raises serious questions about the chain of custody and the integrity of the defense file.

Seamus: The file does contain the undated timeline in Gutierrez’s handwriting, which could have been written at any point after she was hired. The file also has Gutierrez’s notes from Davis’s trip to Woodlawn to talk to Coach Sye, and those notes seem consistent with his statement to police. It now seems like the Ja’uan interview you are referencing was the 4/9 interview, not the 4/20 interview. It does not appear that the notes from that earlier interview were ever turned over to the defense.

In addition to what you mentioned, there are several other pieces of important information missing from the defense files, such as (1) the pages of Debbie’s interview covering “Takera;” (2) the notes from the interviews with Ann, Debbie, and Aisha on 3/2; (3) the notes from the Patrice interview; (4) anything related to CrimeStoppers; (5) etc. I would wager that the missing files are much more helpful than harmful, but it’s tough to say because so many files are nowhere to be found.

Can motions be filed in court to force the state to respond to requests they seem to be ignoring?