In yesterday's Addendum episode of the Undisclosed Podcast, we talked a bit about the school nurse being precluded from testifying at Adnan's second trial. In this entry, I will post the relevant portions of the documents as well as some of the discussion of the issue that took place at trial.

On January 7th, the defense filed a motion in limine which sought to preclude the school nurse from testifying that she thought that Adnan might be faking a catatonic state after the discovery of Hae's body. Here's the motion: 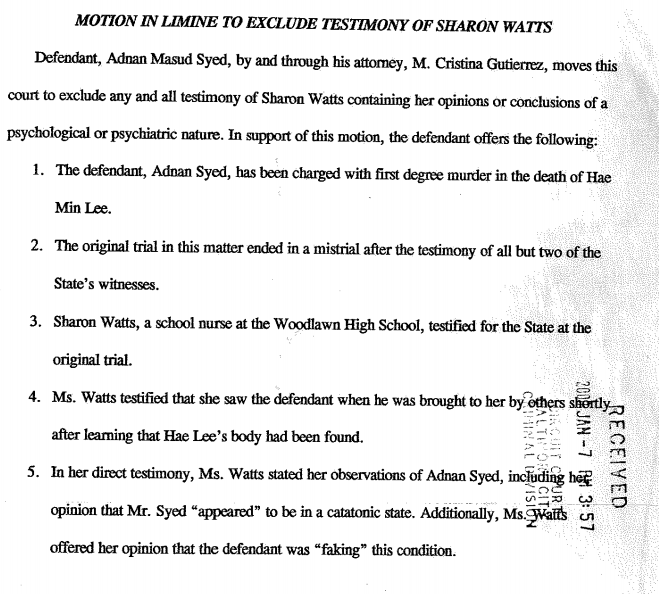 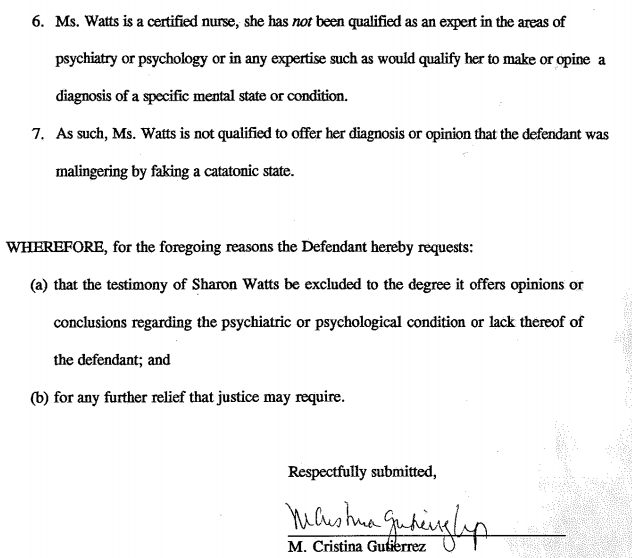 In turn, on January 18th, Judge Heard granted that motion, finding that it was evident that Sharon Watts was not qualified to testify on this issue. Here is her discussion of the issue. 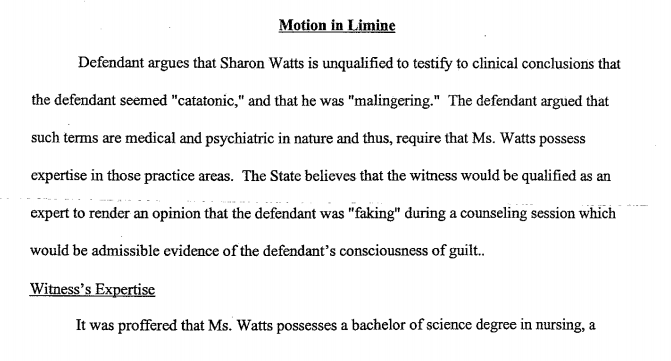 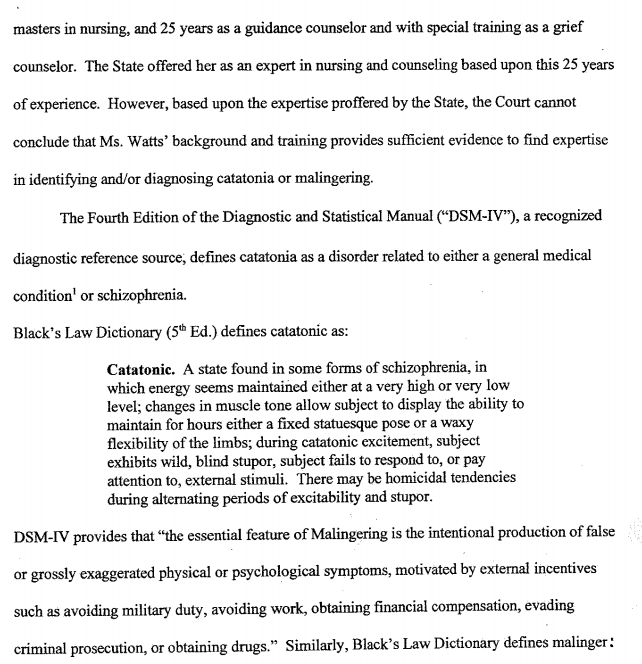 Later, at trial, the prosecution tried to get Judge Heard to revisit this issue and find that Watts was qualified to testify on this issue. But, according to Judge Heard, the State was in a Catch-22: 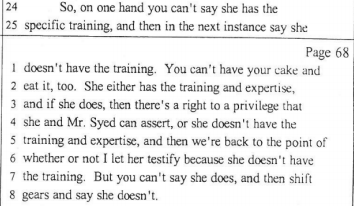 In other words, even if Judge Heard were to change her prior ruling and conclude that Watts was qualified to testify on this issue, that would simply mean that her testimony would be about a privileged communication, making it inadmissible.

Also, who the hell tries to make their reaction to a death seem more believable by "feigning a catatonic state"? That's not a thing.

She was witness to some sort of behavior though. Could she have testified in non medical terms what she observed from him in their interaction in a very factual non opinionated manner? For instance:
Q: How did Adnan act when you saw him?
A: he was not very responsive and did not seem to be aware of his surroundings, he had difficulty responding to my questions etc etc.
Q: did you believe him to be acting genuinely?
A: no I did not.
Q: Why not?
A: insert whatever reason she had for his faking

It seems like one would not have to be a medical expert to give testimony on how they observed someone acting after an event occurred, I am not sure how that may have helped or hurt their case or how relevant that kind of testimony would be.

Susan - exactly! Screaming and wailing are the usual fake and overdramatic reactions. Catatonia though? What kind of teen would think to fake that?

Just goes to show how the police poisoned the well at Woodlawn.

"Could she have testified in non medical terms what she observed from him in their interaction in a very factual non opinionated manner?"

You've missed the point of the State's motivation in calling her as a witness. They were clearly relying on the use of a particular logical fallacy, the argument from authority.

Now, that's pathetic, patronising, and slimy as hell. A school nurse is there to take care of bumps and scrapes, dish out paracetamol for period pain, and deal with the occasional stomach bug. She's no more qualified to diagnose catatonia, than a psychiatrist is to perform complex spinal surgery.

Your idea of calling her and just asking "What did he look like? What did he do?" is just as problematic, maybe more so. They'd still be relying on her job title to impart authority, and her conflict of interest makes that doubly damning.

Why not just ask anyone who was there, if all they want is a brief description of his behaviour? You don't have to be a rocket surgeon, or a brain scientist* to say "I saw Adnan. He was quiet. I think it was fake", do you? But the State knew that a school nurse would have more credibility with the jury. They gambled, they lost.

Susan: Right. If anything, someone would likely overdo their emotional reaction.

Robert: I agree with Squatch. A lay witness would not be qualified to offer an opinion about whether a person was faking their emotional reaction. That’s why there was such a big debate over whether the nurse could be qualified as an expert.