More on the Recommendation of Cristina Gutierrez as Adnan's Attorney

In last night's Addendum Episode of the Undisclosed Podcast, I interviewed Chris Flohr after finding one of the documents in which he recommended Cristina Gutierrez as Adnan's attorney. Importantly, Flohr did not recommend Gutierrez by herself; instead, as this excerpt makes clear, Flohr recommended her as part of a team along with her associate, Mark Martin:

This team, of course, fell apart when Martin left Gutierrez's firm in July 1999 after doing some important work on the case. After initially speaking with Flohr, I actually tracked down a couple of other documents in which he was recommending attorneys for Adnan.

Here's an excerpt from a second document:

The name at the top of the list, interestingly enough, is William "Billy" Murphy, Gutierrez's old law partner. And here's an excerpt from a third document: 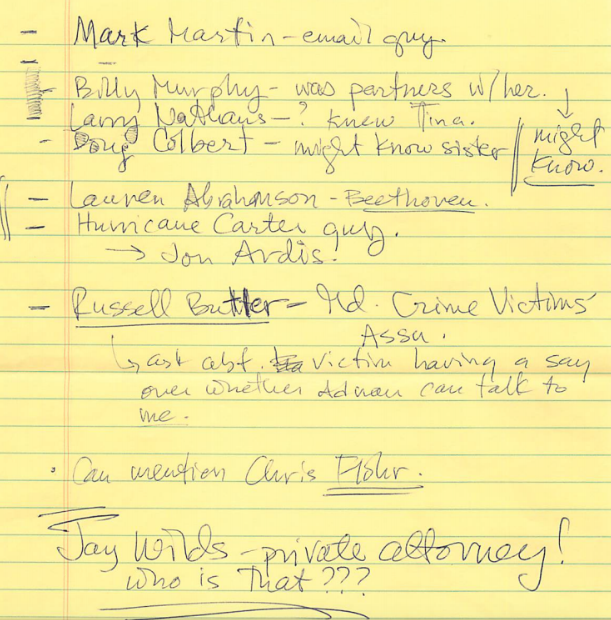 So, again, we have Mark Martin's name. I asked Flohr what the notation "email guy" meant, but he couldn't remember sixteen years later. Billy Murphy's name is mentioned again, although possibly only as someone who knows Gutierrez. It looks like Flohr was also recommending an attorney with involvement in the Rubin "Hurricance" Carter case.

Then, there's the final notation. Before looking at it again right now, I assumed that Flohr must have been referring to Anne Benaroya. Thinking about it again, however, I realize that this document was likely written in March or April of 1999, with Gutierrez taking over the case on April 16, 1999. Jay didn't meet with Benaroya until September 7, 1999. So now, I'm not sure what the notation means.

[Edit: It looks like this last document consists of notes taken by Sarah Koenig despite the document being titled "Chris Flohr Notes." So, luckily, there's not yet another mystery in this case.].

Is there any way to find out which attorney could have been advising Jay at that time? Could it have been Fowley? That would answer some questions.

That yellow letter doesn't look like the same handwriting as the previous lists.

Hi, Colin. Can you tell us this means? Russell Butler -> ask about victim having a say over whether Adnan can talk to me.

I am confided. Did Flohr write this document? If so why does he refer to himself in third person by his full name?

Everything about that yellow legal pad document seems off. Larry "knew Tina", rather than knows Tina. It talks about the victim having a say about someone talking to someone else. What victim? Certainly not Hae? When was this written and by whom?

Who wrote the 3rd document, on the yellow paper?

Colin,
I am curious about the decision to reopen hearings in the Adnan case. I do not see a mention of whether the judge will hear Ineffective Assistance of Counsel on the grounds that Cristina did not seek a plea for Adnan. Has Adnan lost that part of the appeal?

Can you not just call Flohr back and ask him?

Pictonstreetbabber: I’ve heard people come down on both sides of the issue.

Theghostoftomlandry and MzOpinion8d: It’s from a document entitled “Chris Flohr Notes.” It seems to me like he is telling someone else that they can say he referred them.

S: That part of the IAC claim is still with the Court of Special Appeals of Maryland because no additional factfinding needs to be done.

BonaFide: I probably will, once I have a few more things to ask him. This stuff is kind of a footnote to a footnote.

These are SK's notes. Think about it. She probably left them in the file by mistake. The whole sheet makes sense from that perspective.

Jane: It looks like you're right. The notes were mislabeled as Chris Flohr notes when they are in fact Sarah Koenig's notes. Thankfully, we don't have yet another mystery in this case.

Well, to be fair, I am guessing SK labeled them as such because she spoke to Chris Flohr and he told her much of this information.

Good point. Did Flohr ever appear on Serial? I can't remember him being on, but I might be forgetting an interview. What's interesting is that it seems clear now that Koenig must have reached out to Billy Murphy. I wonder whether he talked to her.

Flohr spoke on Episode 10 of Serial

Hi Colin,
Long time listener/reader; first time commenter. I feel a bit uneasy when you post defence file info. I hope this does not cause offence, but isn't it better for Adnan if his defence files were kept confidential?

Thank you & Susan for all you do. I know it is well-intentioned.

Is it likely that these notes were written during the window of time in which Jay did not have an attorney? Some of the guys on the http://www.justiceguru.net forum seem to think this - as for me I'm not sure what to make of this.

Keep up the good work Colin love hearing from you on the podcast!