In Brady v. Maryland, the Supreme Court declared that the State has an affirmative obligation under the Due Process Clause to disclose material exculpatory evidence to the defense. Sometimes impeachment evidence can be material, such as when there is key evidence that could have been used to call into question the credibility of the key witness for the prosecution. It is more typical, however, for substantive evidence to be material. When I teach Brady, the primary example I give is the prosecution failing to turn over the fact that someone told the police that somebody other than the defendant committed the crime. Amazingly, just this scenario might have played out in a murder case in Baltimore involving the Deputy Attorney General handling Adnan's appeal.

Here's the Baltimore Sun article on the case, and here is Rabia Chaudry's blog post about it, which includes the full motion. I will be very interested to see how the Deputy AG responds to these allegations because he faces a seemingly insurmountable obstacle, which comes in the form of Detective Bradley Hood. Here's an excerpt from the testimony of Detective Hood, who was involved in taking the "alternate suspect" statement described in the introduction: 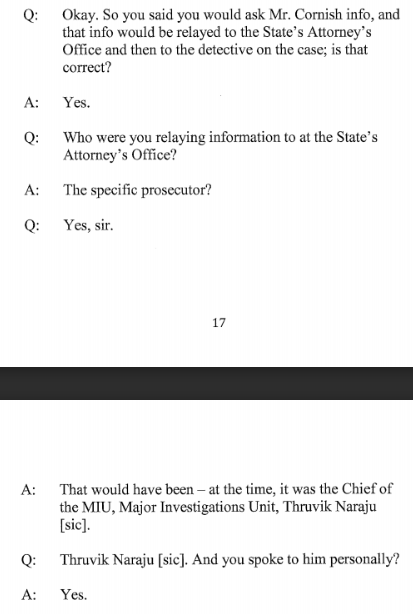 And here's a later excerpt, which gets more to the point:

So...why is it that there's so little in the way of consequences for prosecutorial misconduct? Is it that it's difficult to prove intent? Is it that they are lawyers themselves so are good at not incriminating themselves/arguing technicalities? Is there an offense of deliberate misconduct? Can people sue in civil courts? What do people have to prove happened? Is it that other lawyers don't want to punish their own kind? I really don't get it... If sending someone to prison or worse due to a deliberate act or omission is not outright assault, then it's at least neglect/an act of omission leading to serious and irreparable harm to another individual...

Colin - yet another infuriating episode. How frequently do Brady violations come to light? What are the repercussions for individual prosecutors who are caught withholding information? Are there grades of sanctions for the more wilful examples as may be the case here? Or is it as bad as it seems - that there are likely to be no legal consequences for prosecutors hell-bent on getting a tick for their 'win' column?

Colin, I have the same questions as Kevin. Are there examples of prosecutors being punished for such misconduct? Or cases being out right thrown out? It honestly feels like the principle of innocent until proven guilty is no longer true… it's more innocent until the prosecutor decides you're guilty and is willing to do whatever it takes to make sure of that,no matter if it's legal or not. Also that there's no repercussion for the prosecutor and a tremendous uphill nearly impossible battle for the defendant.

Is there any reason there doesn't seem to be any laws against committing Brady violations? It seems to me that withholding key evidence when your job is to seek the truth should at least get a person fired. I'm an accountant. If I discover someone is embezzling money and I hide that fact, I'm in just as much trouble as the person embezzling when the inevitable happens as the crime if exposed. I become part of the crime and get prosecuted right alongside the embezzlers. Why is that seemingly not the case for prosecutors? Why do they get a free pass for destroying someone's life to further their career? Doesn't that seem like a problem?

I still get my maryland bar journal, which has a section on disbarments and suspensions. I've never seen a prosecutor mentioned. Maybe it is a selective posting where the editors decide whose transgressions will be published. I don't know.

Colin, in relation to this whole disturbing subject, I’m sure you’ve seen the op-ed piece by Brandon Buskey in today’s NYT: 'How to Prosecute Abusive Prosecutors.' He’s looking to criminal prosecution, rather than civil suit, as the way to hold prosecutors like Urick et al. responsible for their actions. Any comments on Buskey’s piece? Thanks –
Bev

Colin, a question from one of your UK followers of the blog. Given the scale of scrutiny, and I'd guess embarrassment to the Maryland law enforcement and prosecutorial institutions continually recently and historically being uncovered does this kind of pattern create any political focus locally or federally? If the agents of justice are seen as renegade, surely it undermines the whole system (does it not)? Can the people of Maryland put pressure on their elected representatives (at any level ? No One seems accountable nor willing to change anything for the better.

I told you after that little bit with the second missing page from the cell phone exhibit that I began to smell a rat. I am not surprised at this news. I now have to wonder how many more cases are out there...

As Rabia says, this is just what we know about. What happened to "liberty and justice for all"? Who is going to fix this? Can it even be done? So disheartening.

JohnCatso - sadly all the ancestors of you reasonable people seem to have stayed in the UK rather than mucking about in the new world. We in the US have a very long-standing tradition of being much more likely to say "She's a witch, BURN her!" than saying "...but what if she isn't a witch?"