Who Made the Decision to Mail Subpoenas to Witnesses in the Adnan Syed Case?

In a post two days ago, I noted how a mistake by one of Cristina Gutierrez's law clerks led to the subpoena for track teammate Will being sent to Woodlawn High School despite the fact that Will had graduated earlier in the year. You might wonder why the defense mailed a subpoena to Will instead of personally serving him. I've posted the memo that Gutierrez's clerk sent to her about the track team members before, but I had never noticed the language at the bottom of that memo. Susan Simpson, however, pointed it out to me a few days ago. 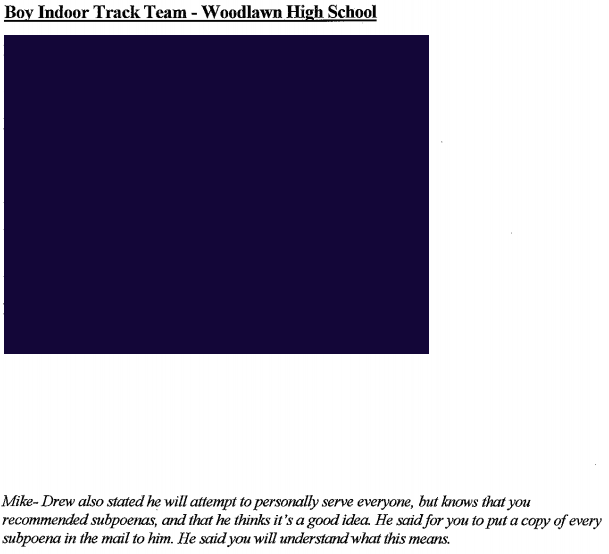 As points of reference: (1) Drew was the private investigator working for Gutierrez on the case; and (2) Mike was a law student/clerk working on the case. So, while the private investigator wanted to personally serve witnesses, such as Will, he was overruled by a law student who recommended mailing subpoenas. And that might have been okay, except for the fact that another law student failed to realize that Will had graduated from Woodlawn and would not receive the subpoena. Something similar happened with Krista, with someone on the defense team failing to realize that her subpoena was sent to the wrong city and zip code. And something similar happened with an assistant track coach. It's also quite possible that any number of other witnesses never received their defense subpoenas.

I read that as Drew wants copies of all subpoenas mailed to him. There must be more to the memo, as I don't read the overrule. Is the defense in contact with these law students and investigators and will we hear from them?

Man. The more I know the more I want to be a paralegal so that lawyers have legit help in the office besides students. Paperwork doesn't bother me! I already work a 9-5 art job so to speak in a cube farm. ;) tedium I can handle!

And no one followed up on people not showing up for court? So ridiculous!
Did Adnan's family receive any money back from that state fund?

I do not understand what "He said you will understand what this means" means in this context. Actually, I don't understand this note at all. Colin, perhaps you could clarify for us non-lawyers what Drew was going to personally serve everyone, because it sounds like it's not subpoenas.

Are Maryland subpoenas which are not personally served even effective? In my jurisdiction, a subpoena sent by mail is not (absent an acknowledgment or something similar).

Cindy: Drew initially wanted to personally serve the witnesses, but he was persuaded by the law student to mail them. Here is an example of such a mailing going wrong:

Nicole: They weren’t aware of the Fund.

carnotbrown: It was a subpoena either way. The only question is whether they would be personally served on witnesses or sent through the mail. Based on the clerk’s recommendation, they were mailed, with disastrous results.

David L.: I’m not sure about Maryland law.

You lack reading comprehension skills Colin. I can't believe you are permitted to teach law at law school. Drew wants Mike to mail Drew the subpoenas so Drew can personally serve them. You must be special.

Am I reading this wrong? Is the memo TO Mike, or is it TO Gutierrez FROM Mike?
Is it:
(To) Mike - Drew also stated he will attempt to personally serve everyone (subpoenas), but knows that you (Mike) recommended subpoenas, and that he (Drew) thinks it's a good idea. He (Drew) said for you (Mike) to put a copy of every subpoena in the mail to (not for) him (Drew). He (Drew) said you (Mike) will understand what this means.

Clem: That interpretation might hold some water if we didn’t know that the Woodlawn subpoenas were sent to Woodlawn High School rather than personally served on their recipients:

carnotbrown: The memo is from a law clerk to Gutierrez. Mike is cc’d on the memo.

Clem, this is a poorly written, ambiguous (and I would guess) hastily written note on the bottom of a memo. You have interpreted it to have a specific meaning but that hardly makes different interpretations deserving of your ridicule.
The first sentence makes no sense if it refers to subpoenas. It is missing a crucial verb between ‘recommended’ and ‘subpoenas’. We could speculate as to what the missing verb is but … it is missing. My speculation is that it is ‘mailing’ and that Drew has agreed that mailing them is a good idea and has asked Mike to ‘put a copy of every subpoena in the mail to him (Drew)’. This is the only way the use of the word ‘copy’ can make this sentence factually correct. Drew cannot ‘personally serve’ a copy of a subpoena on anyone. Only original court documents can be served on a potential witness.
Or, there is no missing verb in the second sentence. In that reading, I interpret the first sentence to mean that Drew was going to attempt to serve everyone with a summons but Mike prefers subpoenas. Drew thinks that’s a good idea and is leaving it with Mike to sort. Drew just wants copies of the subpoenas mailed to him for his records.
And given that mailed subpoenas is exactly what happened, Colin has deduced that Mike (the law student) has overruled Drew and mailed out subpoenas to potential witnesses. Not that special.
And the third sentence? Who knows? Gutierrez presumably.
I hope these law students learned some writing skills as well as legal skills as their course progressed. We shouldn’t have to struggle so hard to understand three sentences.

I read it as the law student saying that Drew would personally serve them and that they should be sent to him. Since everyone on here is confused, someone I'm Tina's office probably was too and thought it said to mail them out instead.

My Business Communications teacher would have blood shooting out of her ears over that note.

a Subpoena required proof of service to be effective.
A subpoena could be mailed by certified mail, signature required, return receipt required, but any attorney worthy of the name Esq. would have a subpoena for a trial served by a process server personally on the witness. Nothing like having a process server show up at your door on a Saturday afternoon! I had to be witness in a case once, and it happened to me. I'd agreed to testify, but the attorney requesting the appearance didn't take a chance I wouldn't appear.

The use of 'also' near the beginning of the note makes me think that Drew would attempt to serve personally to everyone AND that subpoenas could be sent in the post as per Mike's recommendation (but that Drew wants copies too).