I have written before about issues that the defense had with subpoenas in the Adnan Syed case. Cristina Gutierrez and her team apparently refused/failed to talk to five witnesses the defense had subpoenaed (despite asking these witnesses to call Gutierrez). In a document containing a list of the first set of witnesses to be subpoenaed, the name of Hae's best friend -- Aisha -- was written as "Asia," suggesting that the defense might have confused Hae's best friend with Adnan's crucial alibi witness. A law student/clerk was put in charge of subpoenaing Don's work records and misidentified him as an employee of the Hunt Valley LensCrafters.

For months, I've been wondering how the defense failed to contact Adnan's track teammate Will. I think that I now have the answer, and it's much like these latter two examples.

Let's start with the basics. Part of Adnan's alibi for January 13, 1999 has always been that he arrived at track practice on time. Like Adnan, Will was a sprinter; he ran the 55 meter hurdles and possibly other events. As such, he likely would have been among a small group of track teammates practicing with Adnan on January 13th. 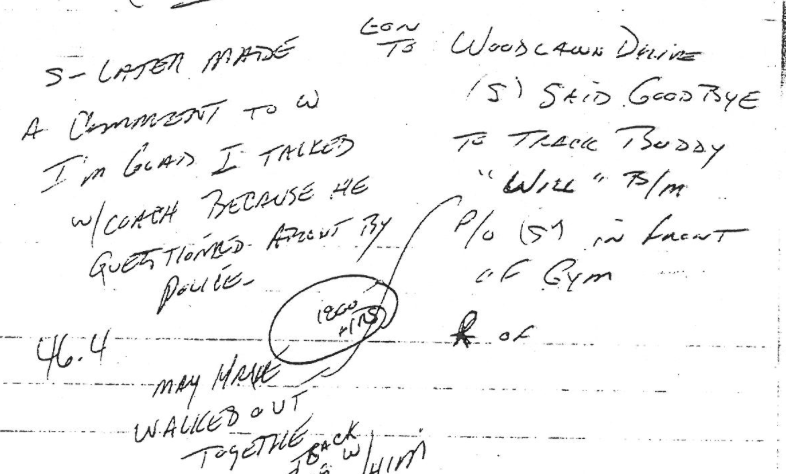 So, according to Jay, Adnan said goodbye to Will as Jay picked him up from the Woodlawn parking lot, and Adnan and Will may have walked out together. Therefore, it is easy to imagine Will remembering Adnan arriving on time for track practice on January 13th; it's also possible that the two walked over to track practice together, given that they apparently left practice together.**

When contacted by Sarah Koenig for Serial, however, Will said that he had never been contacted by the defense.*** According to Will, he probably would have remembered the events of January 13th if asked a few years ago, but, by 2014, those memories were gone.

So, what happened back in 1999? I laid some of this out in my prior post. Gutierrez tasked a law student/clerk with creating a list of Adnan's track teammates. That clerk ostensibly looked at a page from the Woodlawn yearbook that had a list of eight indoor track team members who had medaled at a certain event and turned that list into a memo created more than nine months after Hae disappeared. In creating that memo, that student/clerk failed to realize that Will was a senior in 1999, meaning that he would no longer be at Woodlawn High School in the fall of 1999.****

I think you see where this going. Whether because someone recognized Will's significance or because Will fortuitously appeared on the yearbook page, the defense tried to subpoena Will. Here is a copy of the relevant portion of Will's subpoena:

And that's how Will was never contacted: (1) Gutierrez tasks a law student/clerk with making a list of track teammates; (2) the clerk looks at the yearbook and fails to note that Will was a senior in 1999; (3) the defense sends its subpoena to Woodlawn High School despite the fact that Will has graduated, meaning he doesn't receive the subpoena; and (4) as with Krista, the defense never follows up on the subpoena, and the witness is never contacted. As a result, a potential alibi witness with great significance is never called at Adnan's trial.

*In his police statement, not his trial testimony.

**Of course, it's also possible that Will had no recollection of January 13th or that he remembered Adnan arriving to track practice late.

***Or anyone from the State.

****The clerk also apparently failed to realize that there were dozens of other members of the indoor track team.

Colin - Did the prosecution produce the ride-along notes from January 13th, to the defense?

There is so much more to Adnan's case than ever made it to trial. It's frustrating that much of this new information will never make it into any kind of official record. At this point, it seems more important to the court to preserve the integrity of the process, rather than seeing that justice is done. Colin, is there any means for all of the new information that you, Susan and Rabia (and Bob Ruff) have found to be presented or is the defense limited by the pleadings?

Hi Colin- Is it common to send subpoenas c/o of a high school as opposed to a witness’s home address? Surely, a parent’s home address would be better? Also, wouldn’t it have been easier to ASK Adnan who are his fellow track members? Research a yearbook? Didn’t even send their PI to interview track mates? What a lazy bunch! I’m sorry, my opinion.

If my child was served a subpoena at their school, I would not be a happy mom. Especially if they were a minor.

I was wondering the same things as Sunny. Also, was there anything preventing the defense team from simply picking up the phone and calling the teammates identified on the roster? I know the subpoena is necessary to compel them to testify, but can't both the prosecution and defense talk to witnesses prior to issuing subpoenas?

This makes so much more sense than there being no effort to contact Will. But, without knowing what Will would have said, it doesn't really help the ineffective assistance of counsel case, right?

MCC - Thats the point. You cant dismiss a potential witness without knowing if what they will say will help or harm the case. IAC, period.

When was the subpoena sent to WH for Will? Was this to appear at trial or just to be questioned/deposed by the defense? Is it unusual to be subpoenaed without ever first being contacted for a casual interview or statement?

shi-my question was whether it can be applied to post conviction relief proceedings if you don't know what the witness would have said.