Yesterday, I posted an entry about a document in the defense files in which a clerk or associate was alerting Cristina Gutierrez ("Tina") to the existence of Jay's third statement to detectives on April 13, 1999, right after Adnan was indicted by the grand jury. That document referenced an attachment, making me think that there might be a transcription of Jay's interview or at least notes of what he said. With an assist from Susan Simpson, I now think I have a better understanding of what was going on.

This is what the clerk or associate might have been referencing. 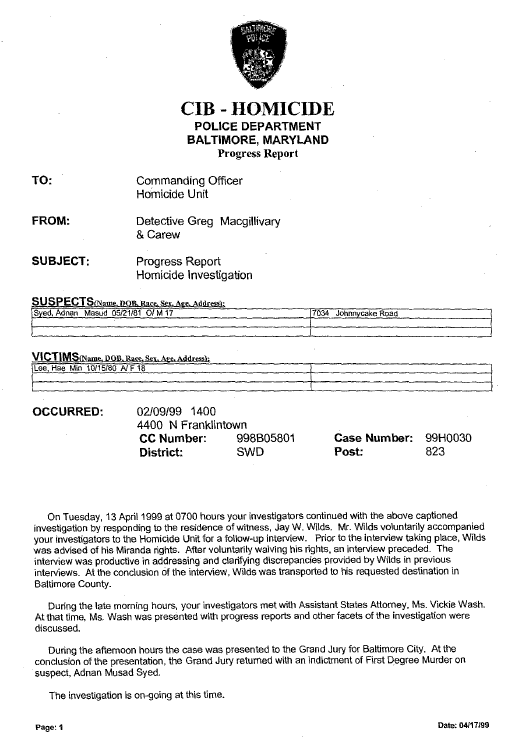 If this Progress Report is accurate, it changes the timeline a bit. It would mean that Jay was actually interviewed just before ASA Vickie Wash finished presenting her case to the grand jury, resulting in Adnan being indicted. The document I referenced in yesterday's post was found among Gutierrez's trial notes, which means that it was likely given to her between Adnan's first and second trials or at Adnan's second trial, when Gutierrez was cross-examining Jay.

The Progress Report confirms the importance of Jay's third official interview: It was "productive in addressing and clarifying discrepancies provided by Wilds in previous interviews." It also was apparently the impetus for Wash presenting her final arguments to the grand jury and securing an indictment, even though Jay was never called as a witness before the grand jury.

In the document from yesterday's post, you can see the wheels turning in the head of the associate or clerk. (S)he is telling Gutierrez that this third interview means that the defense should have access to everything from the grand jury proceedings. After all, if Jay's third interview was the impetus for the indictment, the defense should be able to know what was presented to the grand jury.

I can't tell, however, whether Gutierrez acted on this intel; it certainly doesn't appear that she ever successfully got access to these materials because evidence such as Jenn's grand jury testimony is nowhere to be found. Also nowhere to be found is anything in the way of notes or a transcription of Jay's third interview. Hopefully, at some point, we will know what was said, both by Jay and the detectives.

Professor, on 4/12/99 the BPD printed up weather reports for York, PA for the time period corresponding to HML's disappearance and several days after that. Any relationship to this interview with Jay Wilds? Thanks for all your hard work and eloquence!

June: I would love to know. I have no clue what connection York, PA has to this case.

Would it be possible to get the entirety of the grand jury transcripts now?

JoeJimJohn, why would BPD care about this? CG I could understand.

You say that "I can't tell, however, whether Gutierrez acted on this intel; it certainly doesn't appear that she ever successfully got access to these materials because evidence such as Jenn's grand jury testimony is nowhere to be found. Also nowhere to be found is anything in the way of notes or a transcription of Jay's third interview. Hopefully, at some point, we will know what was said, both by Jay and the detectives."

However, in the Sept. 2000 COSA Brief of Appellant, the April 13th 2000 wilds interview transcript is referenced heavily by Adnan's attorney Warren Brown. Is the suggestion here that Warren Brown was somehow able to obtain it but Christina Gutierrez wasn't?

Isn't the simpler explanation is that it was lost at some point in the 15 intervening years while it sat in Rabia's trunk?

JoeJimJohn: As June notes, these are from the files of the BP.D. I don't know why they'd have anything about the Witman case in PA.

Actually, Colin, in Maryland a prosecutor does not have to bring charges before a grand jury. They can file a criminal information instead. A grand jury indictment always is optional, even for felonies.

Jane: And that would require a judge/magistrate to confirm the prosecutor's claim of probable cause at a preliminary hearing, right?

There are some days I can't decide if CG was super crazy clever to the point where we normal folks can't see the logic or plain incompetent. Was it tactical? Was it an oversight, was it the Procesution playing games no one had time to battle? So frustrating.

Does anyone have a link to Jay's third interview notes/transcription? It certainly sounds like Justin Brown has a copy... is it within any of the new MPIA files?

Cupcake: Justin doesn't have it.

Jane: Right, so either way, the prosecution needed their probable cause determination confirmed. Presumably, they went the grand jury route to keep certain information/testimony private.

Frankito: what page is this reference in the brief of appellant (I can only find it in the CoSA opinion)?
Colin: Would the presence of an earlier tip likely be referenced in the grand jury notes, if it exists?

FrankitoDeMornay: The actual transcript, or the fact of it?
Does anyone know if the Sept. 2000 COSA Brief of Appellant actually cites text from the April 13, 2000 Jay Wilds interview transcript? Or does the brief simply refer to the existence of testimony from an interview?

The COSA brief just cites to the pages of the trial transcript where the 4/13 statement is referenced. It seems pretty clear the attorney did not have a transcript or notes from that statement.

Cupcake: It's tough to say without knowing what Jay said on 4/13.

Out of interest, if the clarifying of inconsistencies consisted of something like: "yeh I lied about that in the first interview to protect (whoever)...what I said in the second interview was true though" would that count as Brady material, as he admitted to lying in a previous interview? Or would it only be Brady if an entirely new version of something emerged?

Hey Collin- This off topic here but what is Adan's birth year? The doc in this post says '81 but the inmate search records give it as '80. This isn't important NOW but just adds to the mall so formation rampant in Adnan's-Hae's case!