Here is the chain of custody form: 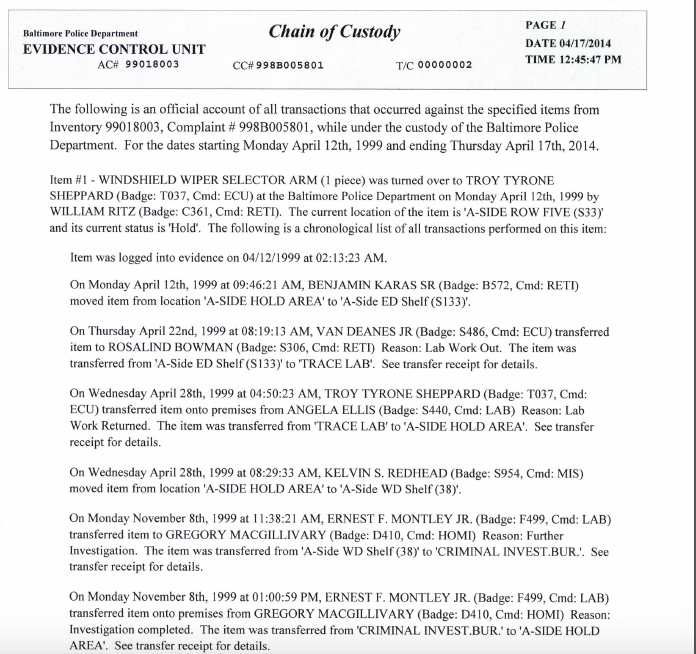 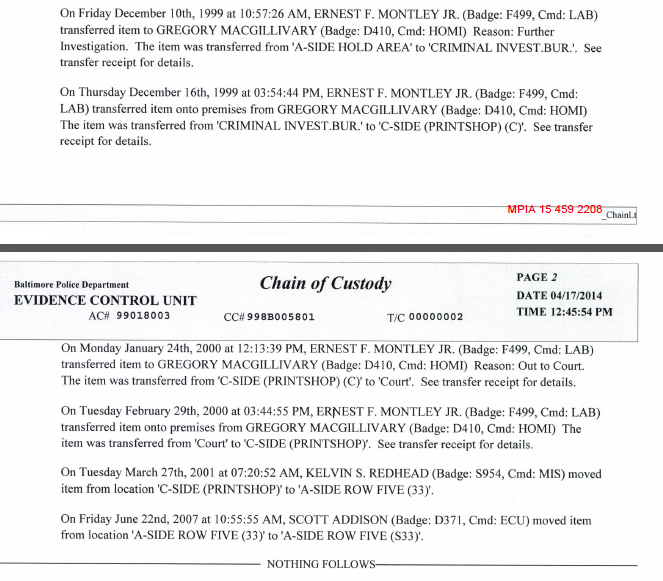 The clear problem here is that the chain of custody form starts on April 12, 1999. That was the day on which Detective MacGillivary sent the windshield wiper lever to the Trace Analysis Unit for a fracture analysis. Before this date, however:

-the windshield wiper lever demonstration was recorded on March 16, 1999, at which point, at a minimum, the ignition collar had been replaced; and

-the Sentra had remained at the body shop for about another month, presumably outside and probably unlocked.

I thought that these events might have been recorded on the chain of custody form, but they clearly aren't. That's pretty much fatal to any claim of authentication. As such, Gutierrez easily could have objected to the admission of evidence relating to the windshield wiper lever, and that objection would have been sustained.

I still can't wrap my head around how MUCH CG missed/stipulated to. I feel like I could have done a better job as Adnan's lawyer from watching Law & Order. and what about her clerks or associates? why did no one say anything? I understand that the prosecution was playing fast and loose with discovery, but she should have had her own investigators, right? She could have done so much more for the Syed's money and I just can't understand why she didn't. Don was always a credible alternate suspect, she could have found out what Bob from SD did so easily at the time.

More incredibly troubling information and another ball dropped by CG. How could any attorney handle so many murder cases is so many different jurisdictions at one time? This case is heartbreaking.

There were also failures to properly search the sentra. Adnan's accord was identified as being suspected of transporting a body, and searched much more thoroughly. It's trunk liner was retained as evidence. The search of the sentra was less thorough and there is no note of the trunk liner or suspected transport of a body.

sasha: The stipulations are so shocking. In 12+ years as a lawyer and professor, I’ve never seen a case with so many stipulations on disputable issues.

June: Clearly, it was too much for Gutierrez.

Cupcake: There should be chain of custody for the car up to the point that the lever was removed. Otherwise, you have issues such as the adjacent ignition collar being replaced at the time of the video.

Colin, should items such as the red jacket photographed in the Sentra trunk have been logged in the inspection report and retained as evidence? Or is that up to the discretion of the inspector, and the photographs suffice?

Could the failure to object to an issue like this be grounds for an IAC claim?

Not sure if I put this question in correct place but here it is again: what is Adnan's correct birth year? On your last post and on the Progress Report, his birth year is listed as '81 while on the inmate search directory it is given as '80. They apparently have still not corrected his stats! Sorry for the intrusion and many flowers of appreciation for your attention to Adnan's - Hae's case!!!

Regardless of the chain of custody, it seems that either somebody deliberately broke the turn signal to match Jay's testimony or Jay knew something specific about the condition of the car.

brgulker: It's not a significant enough issue to warrant an IAC claim.

S: Or the lever was replaced or altered when workers at the body shop were doing work on the steering column, such as replacing the adjacent ignition collar.

again with the lack of attention to detail on CGs part. the fact the Hae's car, which the state says is the car the body was transported in was released to a body shop owned by a family member without any forensic testing done should have gotten the car and everything in it thrown out, right? chain of custody certainly should have been a factor, and also the fact that they started out saying that Adnan's car was the one her body was in. does this count towards IAC too?

S: Or it was broken and police fed that info to Jay to give him more details...