Are There Notes of Jay's April 13th Interview With Detectives?

As I've noted before, Jay was officially interviewed* three times by detectives: (1) on February 28, 1999; (2) on March 15, 1999; and (3) on April 13, 1999, after Adnan was indicted by the grand jury. I had always been under the impression that the State never turned over anything to the defense regarding this third interview, with the defense's only knowledge of it coming from Jay's testimony at trial. During a deep dive into the defense files, however, I found this document: 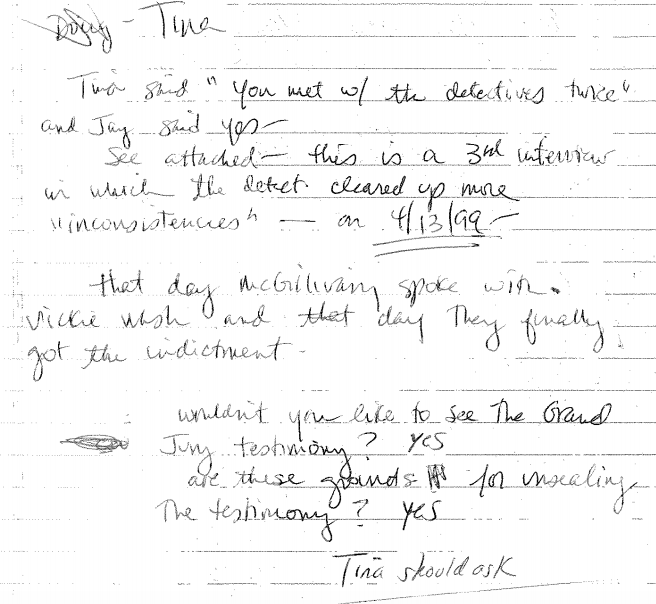 As you can see, this document, presumably written by a clerk or fellow attorney, states: "See attached -- this is a 3rd interview in which the detect cleared up more 'inconsistencies' -- on 4/13/99." Unfortunately, I haven't been able to locate this attachment, and Gutierrez seemingly referenced no such attachment at trial.

I hope that I'm able to track it down at some point. Jay's trial narrative was very different from the narrative in either his March 15th interview or March 18th ride along. Thus, his April 13th interview is the key missing link that could explain the evolution of his story. We now have some indication that there is some documentation of this interview, but we still lack that documentation.

*Of course, there was also the ride along that Jay did with detectives on March 18, 1999.

Who is this Doug? Did he scratch out his name and write "Tina should ask?" How much of this case comes down to people wanting to get home in time for dinner? Good luck finding the documentation on the interview. That would be an interesting read.

Did CG get to see the grand jury testimony? Is there an implication that Vickie Wash wasn't supporting an indictment until the "inconsistencies" had been "cleared up" in a secret additional interview? When did CG have an opportunity to ask Jay questions? Is this as bonkers as it sounds?

Do we know who testified at the grand jury proceedings? While I know Jay didn't testify, were the detectives allowed to testify as to what Jay had told them? If so, it seems that they would conveniently be able to only offer the parts of his story that (supposedly) "fit" their theory. Was the date of the grand jury proceedings on April 13, or was that the date that the indictment was returned (presumably a few days or weeks after the actual proceedings)?

Have you looked at pages 801-819 of the MPIA dump `BCPD file2.pdf' at reddit? Some record of an interview with Jay in there.

Really good questions. I always wondered if there was a deposition for Jay but I only know enough about different kinds of law cases so know if CG would have been there for a deposition in any case.

I'd imagine the recently released police files would contain this information. If they do, I will be very much looking forward to your post on the issue.

Since you're looking deep into the defense files, have found any documents dated prior to 7/13 where Adnan told his lawyers of his whereabouts between 2:15-4:00?

Is there any indication of whether or not CG did try to have the grand jury testimony unsealed?

Cupcake: I don't think she ever got to see grand jury testimony by prosecution witnesses, but I'm not sure about that.

Ann: We will be covering that in Episode 13.

Halbarad1104: I'll have to look at those pages.

SummerDreams: Yes, I think Susan indeed found something. I will post about it later today.

Seamus: There are the undated notes taken but Gutierrez, listing Asia/library and track. Obviously, these are undated, but my best guess is that they were taken prior to 7/13.

Ellejorge: I'm not sure without checking. It does seem, however, like Gutierrez never got Jenn's grand jury testimony.

Can I ask why you think that? Based on the content of the notes it looks to me like they were taken between the 7/13 and 8/21 clerk interviews.