In its CONSOLIDATED RESPONSE IN OPPOSITION TO PETITIONER’S MOTION AND SUPPLEMENT TO REOPEN POST-CONVICTION PROCEEDINGS in the Adnan Syed case, the State made the following argument:

The flaw in Syed’s argument is that the cellphone records relied upon by the State’s expert and entered into evidence at trial were not Subscriber Activity reports. They had no blacked out columns; they had none of the codes discussed in the boilerplate legend; they lacked a column titled "location." See State’s Exhibit 31. Accordingly, it is flatly erroneous to say that the statement about the reliability of incoming calls — which relates to Subscriber Activity reports — applies to the altogether different records used by the State. Indeed, the "Subscriber Activity" reports were neither identified as exhibits nor admitted into evidence. What was admitted into evidence were cellphone records accompanied by a certification of authenticity, signed by an AT&T security analyst, and relied upon by the State’s expert who himself was employed by AT&T as a radio frequency engineer.

In this post, I will discuss the concept of authenticity/authentication as it relates to the cell tower and forensic evidence in the case.

Authentication is the process by which a party asserts that an exhibit demonstrates "X" and then establishes that the exhibit does in fact demonstrate "X." For instance, imagine that defense counsel wants to introduce what it claims to be a confession letter written by an alternate suspect. Defense counsel would need to proffer that letter as a confession letter written by the alternate suspect and then present sufficient evidence (e.g., testimony by (1) a handwriting expert or (2) someone familiar with the alternate suspect's handwriting) to have the the letter authenticated so that the judge could decide whether the letter satisfies the rules of evidence and will be admissible.

Under federal law, authentication is covered by Federal Rule of Evidence 901(a), which provides that

To satisfy the requirement of authenticating or identifying an item of evidence, the proponent must produce evidence sufficient to support a finding that the item is what the proponent claims it is.

Importantly, authentication does not in any way establish the reliability of the contents of the exhibit. For instance, under Rule 902(6), an article from the National Enquirer would be self-authenticating, but the contents of that article would not be reliable, for obvious reasons. Similarly, a certified copy of polygraph test results would be self-authenticating under Federal Rule of Evidence 902(4), but the results themselves would be neither (legally) reliable nor admissible.

In this sense, I'm not sure what distinction the State is trying to make in its RESPONSE. It seemingly acknowledges that Exhibit 31 was accompanied by the AT&T cover sheet about incoming calls being unreliable for determining location and yet cites to the certification of authenticity as if that certification could solve the reliability problem. The problem for the State is that it can't. The certificate of authenticity merely tends to establish that Exhibit 31 consisted of cell phone records, not that the records of incoming calls are reliable for determining location, at least with regard to incoming calls.

This takes me to the forensic evidence in the case. This is from the testimony by Dr. William C. Rodriguez, who was in charge of disinterring Hae Min Lee (page 159): 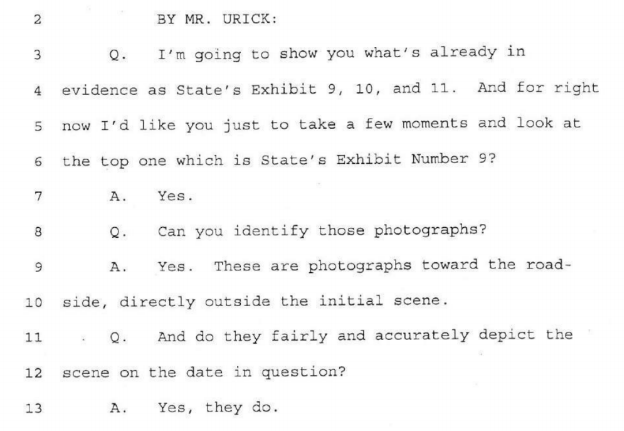 This is how photographs are authenticated: A witness who was present when the photos were taken testifies that they fairly and accurately depict the scene on the date in question. As his testimony progresses, Dr. Rodriguez subsequently provides further authentication of specific photographs and what they depict.

When the medical examiner on Episode 5 of Undisclosed concluded that lividity was inconsistent with Hae Min Lee being (1) pretzeled up in the trunk of her Sentra for 4-5 hours after death; and (2) buried in Leakin Park in the 7:00 P.M. hour, she was relying upon trial testimony, autopsy photos, and the autopsy report. When, as I reported on the Labor Day minisode, the medical examiner reached these same conclusions, she was also relying upon the eight crime scene photos which were authenticated and admitted as State's exhibits at trial. In other words, the medical expert reached her conclusions based upon all of the evidence that satisfied the authentication requirement and the other rules of evidence.

So, if a new trial is ordered then can all the photographs can be authenticated? Or only a subset of what were entered into evidence firsthand?

S: To authenticate a photo, Dr. Rodriguez or some other qualified witness would need to testify that it accurately depicts the crime scene on February 9, 1999. Then, whichever party seeks to introduce the evidence would need to establish what the photo depicts and that the depiction is relevant and has probative value that is not substantially outweighed by the danger of unfair prejudice, confusing the jury, etc. I don't know how many photos would satisfy these tests.

Regarding the autopsy photos, did the five sent to Dr. Hvlatay for examination include photos of Hae's lower body and legs? I ask because Susan described the photos way back in February as not including any photos of the majority of the legs, and wanted to know if that was true of the photos sent to Dr. H.

Also, did Dr. H offer any explanation or have any insight into what Korell's description of lividity as prominent in the upper chest and face in the report said about possible body position and consistency with the burial position?

Thanks for your time.

Can you please post a copy of Exhibit 31 or describe it in detail?

Hi Colin, Were the images submitted for evidence used for evidence of the lividity in court or used to reference general crime scene (or another specific part of the trial?). Apologies if this has been asked before, I was just wondering if they might have chose different pictures from a set based on what they were trying to illustrate? Thank you for your help

Just to clarify - can anyone put in an MPIA request for police photos of murder victims that haven't even been seen by the public during a trial? Are there no restrictions on who such photos can be released to?

Are they arguing that the disclaimer doesn't apply because it wasn't admitted/authenticated and is thus not part of the record?

Ohdatsclever: They did not. As far as the description of the prominent lividity, it would seemingly be impossible to tell without photos of the entire body. For instance, after seeing the crime scene photos, she was able to confirm anterior abdominal lividity.

monstimal: Exhibit 31 is pages of cell phone records like this: https://pbs.twimg.com/media/CPrEtYIUAAAWrq0.png:large

C: The primary purpose of the State was to show the jury the positioning of the body before it was disinterred. I don’t know if they cared about the extent to which the crime scene photos showed lividity.

Cupcake: It’s tough to say what people can get as the result of MPIA searches. I’m aware of a number of MPIA requests that have not been fulfilled.

Colin, thanks for the response. I understand your point about prominence being relative and thus hard to determine without photos of the lower body. However, that was the original ME's finding which Dr. H used as a guide for her previous opinions on lividity, since she said she couldn't determine the pattern from the photos provided. Did Dr. H have no comment on the description of lividity prominence at all? From my understanding prominence of lividity could indicate body position and gravity etc. when livor is fixed so it would seem to be an important consideration.

Upon seeing the crime scene photos, was Dr. H able to make any other determination about lividity pattern on Hae's lower body? I know there was clothes obscuring, but was she able to discern any general pattern whatsoever?

Thanks again for your time.

From watching trials over the years, I’m pretty sure the judge decides what gets sealed from trials based on requests from the state or defense. Ex. The Colorado Theater Trial- the crime scene photos and the autopsy photos were not shown online during the trial. They are also sealed from any requests media, pubic. Sometimes photos can be released to media & interested parties only (attorneys from the victims or accused) but not general public. Apparently, in the Syed case, there is no judge’s order or restriction & it’s up to whoever is holding the files & how they feel that day to release some, all or none depending who asks.

1st: thanks, I really enjoy your work, great learning for non-lawyers, seriously thank you.

2nd. If the State is claiming only Subscriber Activity reports can show location, and none were submitted into evidence, yet they told the jury in closing the cell phone records proved location, how can they have it both ways? Seems to be the only evidence submitted had a huge disclaimer on it, and yet they want to say it still doesn't fit? Statement you reference:

"Accordingly, it is flatly erroneous to say that the statement about the reliability of incoming calls — which relates to Subscriber Activity reports — applies to the altogether different records used by the State. Indeed, the "Subscriber Activity" reports were neither identified as exhibits nor admitted into evidence."

Thanks again, Colin. Your team is awesome and the podcast are great. Also that Bob guy is awesome too.

Have you seen Exhibit 31? Please be clear. I know it is something "like" other cell phone records, I want to know exactly what it is, what information is on it, and who put it together (ie Waranwitz himself or AT&T).

If you don't know, just say you don't know because you haven't seen it, which is what you indicated in your other post on this subject.

Colin, Given that the judge assigned to decide the merits of the motion to re-open this case so Asia can testify was called back from retirement to hear this case, is it reasonable to think that things might move more quickly than the 'possibly months' you have suggested in other posts? A caseload of one surely allows the wheels of justice to turn pretty damned quickly?

Ohdatsclever: She wasn’t able to confirm the lividity pattern from the low resolution black and white photos. From the crime scene photos, she was able to see anterior abdominal lividity that was inconsistent with burial position. That’s pretty much the long and short of it.

BK: The State is wrong. The did in fact introduce a Subscriber Activity report into evidence.

FarFarAway: The fact that this is the once case being handled by this judge gives me some hope.

Wait... So the State did not include the first page of exhibit 31 and that's the only page with the title "Subscriber Activity"? That seems a little too convenient to be an accident.

You are a busy and intelligent man, so I truly appreciate all the credibility you bring to the Undisclosed podcast.

1. I'm sure answered this before: Why would Justin Brown tell the Innocence Project to hold off on testing the DNA under Hae's fingernails?

3. As far as court briefs go, could you please find some relevant articles for me to research that explains the legal history of contesting state briefs that are grossly inaccurate?

(2) I don’t think that there’s anything that we can add to that discussion, beyond a discussion of some of what went on during discovery back in 1999.

(3) I don’t know that there are any articles on that history. The basic advice when you receive a brief with factual and legal inaccuracies is to address them, head on.

Susan's latest blog post discusses that the state didn't turn over photos and/or documentation from the crime scene despite numerous requests from CG, claiming nothing else exists. Clearly now, more exists, but it was never authenticated as you note. Would lack of turning over this material also be a Brady violation?