Another First-Degree Murder Case Handled by Cristina Gutierrez in 1999

I have written before about some of the other first-degree murder cases that Cristina Gutierrez was handling at the same time that she was handling the Adnan Syed case. We can now add another to the roster: State v. Matthews.

Here is a letter that Gutierrez sent to the Security Chief at the Detention Center where Adnan was incarcerated: 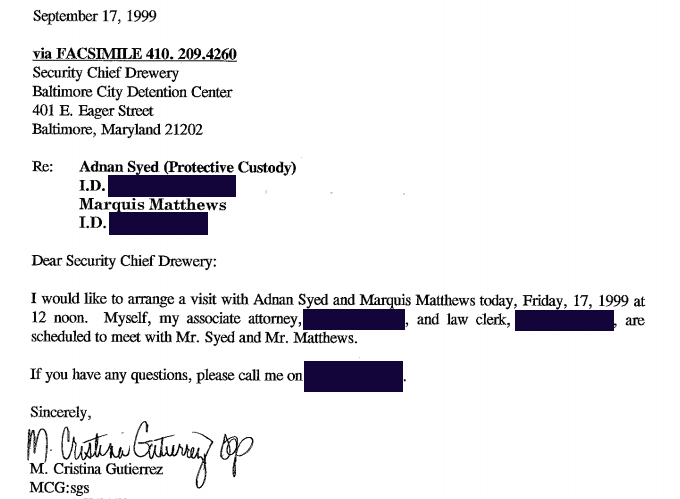 The Matthews case is definitely a sad one. On March 13, 1999, Matthews was charged with first-degree murder based upon the death of his five-month old son. According to the Baltimore Sun article on the case:

Polaris' mother, Kimberly Johnson, could not be reached for comment. Matthews' attorney, Sheldon Rubenstein, said his client told him "it was an accident. He didn't realize the water was that hot."

Police said Matthews bathed Polaris about 3:30 p.m. Feb. 5 and noticed the child's skin peeling when he was drying him.

Police said he immediately called Johnson, his girlfriend and the child's mother, who came home from work and found that the child had blisters and burn marks.

The couple and Johnson's mother took the baby to University of Maryland Medical Center about 8 p.m. He was later transferred to Johns Hopkins Hospital.

Police said they went to the home and found that the temperature of the bathwater was between 146 and 150.

Court documents filed yesterday said Matthews told police that he filled the bathtub with hot water and then added cold water. "The defendant stated that he tested the water prior to placing the child in the water and that the water was not hot enough to burn the child," the documents said.

Because the victim was a child, Matthews would have been eligible to receive the death penalty if the prosecution pursued it. Instead, from court records, it appears that Matthews pleaded guilty to the lesser included offense of involuntary manslaughter on October 21, 1999 and was sentenced to ten years incarceration, starting on February 7, 2000. This means that, barring any other infractions, Matthews was likely released from incarceration at the latest on February 7, 2010.

The judge who handled the Matthews case was none other than Judge William Quarles, who was the reason for the mistrial at Adnan's first trial on December 15, 2000 based upon calling Gutierrez a liar. The Matthews case makes me wonder whether that comment was based not only on behavior that occurred during Adnan's trial but also during the Matthews proceedings.

Colin, has Maryland responded to Brown's motion yet? Today being the 8th, what happens now if they don't? Thanks -
Bev

Bev: They've asked for an extension until September 23rd to respond. I assume that the judge will grant the State this extension.

Colin, what could be making this a long process for them? Is it at all possible, given the AT&T fax page, that they're looking at the lack of evidence and considering vacating Adnan's conviction?
Bev

Interesting, too, that a plea deal was involved in Matthews and not Syed.

With regard to the State's asking for an extension, do you think it might prove to be a bad move? I gather the judge is eager to get on with the matter. Will an extension make the State's uphill climb even more difficult in front of a potentially testy, exasperated judge?

Did they have to give a reason? What do they gain by stalling?

Colin, what did Gutierrez do during the Matthews proceeding to warrant such a reaction from the judge?

Bev: I assume that they’re backlogged and trying to write a persuasive opposition.

streetwriter: I don’t think it will have much of an effect on the judge.

Abby C: No reason as far as I know.

S: Right. She asked for and received a plea deal in that Matthews case.

I guess, in this case, the facts were not in dispute. So a plea deal makes some sense.

Of the other cases, that Christina took on at the same time, is Adnan's the only case in which the defendant has claimed that she did not forward his/her request for a plea deal?

Interesting that she worked out a plea deal in this case that happened around the same time as the Syed case. It's a pretty serious blow to Syed's claim that Gutierrez outright lied to him about asking for a plea deal.

What was discussed in the Sept. 17 prison visit?

Hi Colin, do you think the state is stalling the response to get more indri nation on what you guys have found? I am sure they are listing to undisclosed. Also, if Adan gets a trial, can the state use a different timeline??

Hi Colin- If Adnan does get a new trial does the state have the option of changing their timeline to match the evidence that has come to light in the last 16 years? Can they present evidence that has not been seen before?? Thanks for the insight!

Colin - this is not related to this particular article, however I was listening to the 'Labor Day Minisode' today and I have a question about the time of death. I have wondered this for a long time, there is no way to determine exact time of death when you find a body five weeks later is there? I'm unclear as to how Gutierrez allowed all the state to make such a big deal about 1530 being the time of death?

sad to think that if she'd asked for a plea deal for Adnan like he asked her to, he could also have been out in 2010.

dear lord, the matthews case is devastating. so much heartbreak in every direction.

colin, I am so grateful for all of the work that you, rabia, and susan have done to raise the level of dialogue in terms of the failures within the legal system - from attorneys to detectives, simply breaking down the corruption, carelessness, and biases into manageable pieces is so important for people trying to put together the larger picture within the US (particularly in light of the black lives matter movement and greater understanding/unmasking of police brutality)

feel free to not publish this comment - I know space here is limited - but y'all are doing important work.

S: Agreed. It seems (from the article at least) that Matthews was at least guilty of manslaughter, making a plea deal the obvious choice. As for other cases by Gutierrez, it’s tough to say. I only have a small percentage of the cases Gutierrez handled in 1999 and 2000, and none besides Matthews and Adnan seemed to involve a defendant who asked about a plea deal.

Seamus: I don’t see how the Matthews case tells us much if anything. As noted, the Matthews case was an obvious candidate for a plea deal. We know from the Merzbacher case that Gutierrez had issues of honesty and communication in connection with plea bargaining in other cases. We also know that it was legally concluded that Gutierrez lied to several other clients whom she represented at the same time as Adnan.

Monja: It’s tough to say. They could have filed an extension for any number of reasons. If there’s a new trial, they could argue a new timeline, but the defense could use testimony from the first trial to contradict that new timeline.

Michelle: She tried to argue that Hae could have died days or hours later. Unfortunately, she didn’t hire her own medical examiner to support these arguments.

sasha: Plea deals are interesting. Sometime the obviously guilty fare much better than those who might be innocent.

Colin, has anyone from the Gutierrez "camp" come forward in Adnan's case (or others) to discuss any mishandling of cases, evidence, witnesses, etc. Would this have come out when she was initially disbarred?

Hi Colin,
First, I would like to thank you for all the work you are doing on behalf of Adnan and other wrongly convicted people all over the country. One thing has been bothering me about this case and I have not been able to shake it. Awhile ago, someone on the podcast mentioned the possibility that there may have been a mole in the defense camp. Several things lead me to believe that this may be the case. The fact that the prosecution pointed to an “unimpeachable” source that advised that CG had no idea what to make of the lividity evidence is one. Also, Urick just so happened to subpoena Don’s time records at the same time as CG, even though CG requested of the Judge that this information be kept sealed. The final coincidence occurred during the Ride Along episode when it was mentioned that the Police noted Coach Sye’s conversation with Adnan regarding speaking at the Mosque. I think you mentioned that the police didn’t speak to the Coach until several days later.
Was there a defense mole? Any idea who it could be? Or is there any other way to explain why the prosecution knew things they should not have known about the defense?

Colin, why do you think Kevin Urick never offered a plea? Even if CG wasn't interested in one, wouldn't KU have offered one anyway just to get out of the hassle of a trial?

I'm consistently stunned by the workload this woman was carrying. Thanks for sharing.

The Court of Special Appeals just overturned a Baltimore murder conviction in one of Det. Daryl Massey's cases. The Court held that the Defendant was denied his right to cross-examine Massey about an internal affairs investigation that found that Massey had submitted falsified time sheets.

Shari: I don’t know. They are among the people “off limits” for us.

Shi: I would love to know the answers to these questions.

Marvin: It’s a great question. I don’t know there was no plea offer, especially after the first trial.

S: Yes, we will be discussing the case on Monday’s episode.

Colin: "We know from the Merzbacher case that Gutierrez had issues of honesty and communication in connection with plea bargaining in other cases. We also know that it was legally concluded that Gutierrez lied to several other clients whom she represented at the same time as Adnan."
Is it true that we don't know if it could be "legally concluded" if she lied to other clients because many claims were not investigated because her problems with money were enough for the disbarrment? I'm inclined to think that if she had a record number of complaints about financial dealings from her clients, that many of the other claims by those clients also had merit.

Colin, today is September 23. Has the State responded to Brown's motion, or has yet another extension been granted? Please explain where things are with this.
Many thanks -
Bev