Today, the February 24, 2015 trial transcript was posted from Adnan Syed's second trial. On that date, there was testimony from Adnan's guidance counselor. One question that has vexed those listening to Serial and Undisclosed is whether Adnan picked up his recommendation letter on January 13, 1999, which is when the letter is dated. This transcript now answers this question (pg. 206-207): 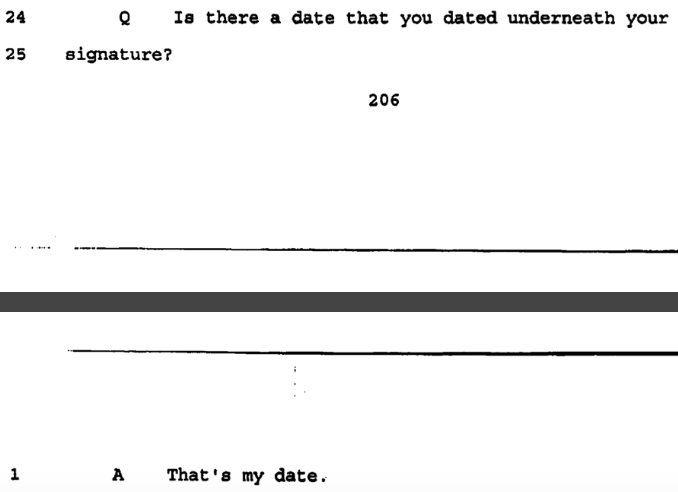 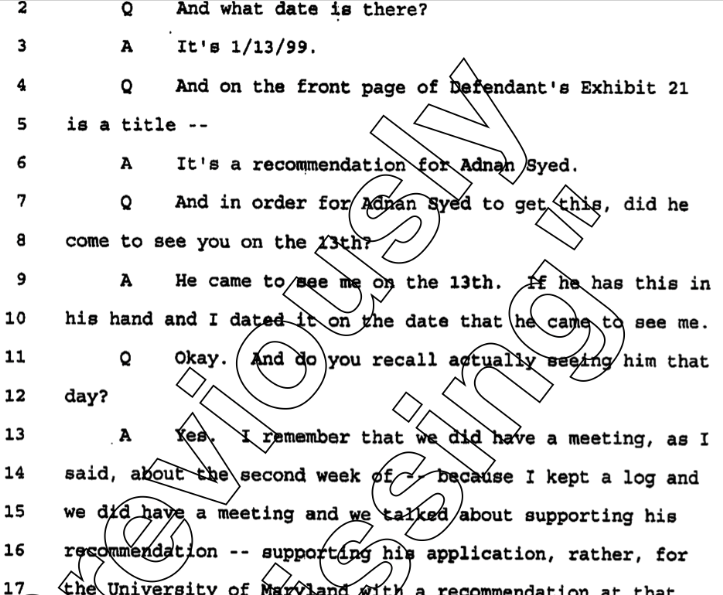 So...mystery solved. Adnan made at least one trip to the guidance counselor's office on January 13, 1999. Was that trip at 1:13 P.M., as is suggested by this attorney's note, or was that a mistake because the letter was dated 1/13? Or was the trip at about 2:45 P.M., as Debbie said in her statement? Or did Adnan go to the guidance counselor's office at both 1:13 P.M. and around 2:45 P.M. because the letter wasn't ready the first time, Adnan was following up, etc. Unfortunately, we don't know the answers to those questions.

So Gutierrez interviewed an alibi witness as a character witness. And then she got her to testify that they're both classified as "Asian". Bravo, Gutz!

So Asia, Guidance Counselor, and track coach all alibi Adnan... and he still gets convicted?

How did CG not completely dismantle the prosecution's timeline in closing?

Adnan's timelines claim he got the letter around 12:50 before 4th period and that he arrived to class "a few minutes before 1:00 cause it took some time in the guidance office." However, the truth is he was 37 minutes late to class and arrived at 1:27 PM. Is there anything in the defense files indicating why he was so late to class? He had plenty of free time between the end of second period to get the letter.

carnotbrown: It’s so frustrating. The guidance counselor says that she kept a log of her meetings. Let’s assume that the meeting was at, say, 2:30 or 2:45 P.M. That would have been huge for Adnan’s defense. But Gutierrez apparently never investigated the matter.

brgulker: She never contacted Asia, she didn’t realize that Coach Sye only could have remembered seeing Adnan on 1/13 based on the weather, and she never got the log of when Adnan met with the guidance counselor.

Jane: That's certainly one fair conclusion, but this note just troubles me so much:

I think there's a really solid chance that Adnan and/or Gutierrez saw 1/13 on the letter and concluded that it was printed out at 1:13 P.M.

Yes, but Adnan wrote out his schedule himself and included a trip to see Stuckeye before Psych. Are you suggesting that he had seen CG's note about the time of the visit and was relying on that?

Jane: I'm suggesting that it's possible that Adnan or his attorney saw the 1/13 on the recommendation letter (which was used at the 3/31 bail hearing) and misread it as the letter being printed at 1:13 P.M. This then led Adnan to conclude that he was the the GC's office at 1:13 P.M. I'm not saying that's what happened, but it certainly does seem like there was some confusion about 1/13 vs. 1:13. My best guess is still that Adnan got the letter before Psychology class, but I can't dismiss the other possibility, for better or for worse.

It seems hard to swallow that someone would meet with a guidance counselor in hot pursuit of a letter of rec, looking to his future, and at the same time completely jeopardize his future by planning and successfully executing the murder of his gf. To believe the State, he would have to have been a meticulous planner (given all the places he went and things he did that day) to be able to schedule murdering his gf in the middle of it all, and a psychic who would have to know ahead of time that for his plan to work, hae would give him a ride. The state’s case is beyond ridiculous, as was his legal representation. The tunnel vision, at the cost of the actual pursuit of the truth, was abhorrently disrespectful to this girls memory and to justice.

If Adnan wasn't getting the recommendation letter before he arrived to 4th period, what was he doing with Jay that made him 37 minutes late to class?

Seamus: I don't know. I still think that Debbie has the wrong day, so I haven't thought much about the middle of the day. If I start to become convinced that she has the right day, I will think about it more.

Seamus: Perhaps Adnan killed Hae in the one o'clock hour and everyone is simply mistaken about the day. No-one saw Hae after the beginning on fourth period. It makes as much sense as the prosecution case.

This has been raised before, but how could Adnan have been seen in two places at the same time on the 13th? -Debbie at the guidance counselor at 2:45 and by Asia at the library from 2:30-2:45.

Anatomy of a wrongful conviction. This case has it all. It's so depressing, and it's just too much. Great work exposing all the flaws. I love your blog posts!

Debbie (outside counselor's office at 2:45) and Asia (library until about 2:40ish) don't actually alibi Adnan from committing the murder. If we were to take Inez's first statements about when she saw Hae leave the school, it's later than her trial testimony. If the reports of Hae being in a rush are in error- if the "something she had to do" was later in the day and a reason to not give Adnan a ride, say, after track, then she's not rushing out the door and he might be able to convince her to run him someplace quick before track practice.

But we don't have evidence for something like that. What we do have is the case the state assembled, and Debbie and Asia do create a problem for the state's timeline.