The U.S.-U.K. Extradition Treaty, the Doctrine of "Dual Criminality," and the Detention of Adnan Syed

As part of the bail package presented by Adnan's lawyers, Adnan agreed to do two things in addition to posting collateral and submitting to electronic monitoring/house arrest. First, he agreed to turn in his passport. 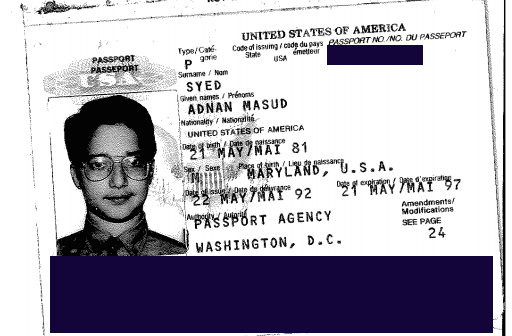 Two things are clear from the passport: (1) Adnan's birth date of May 21, 1981, establishing his ineligibility for the death penalty; and (2) the May 21, 1997 expiration of the passport, meaning that it had been expired for nearly two years before his arrest.

Second, Adnan agreed to sign an Irrevocable Waiver of Extradition: 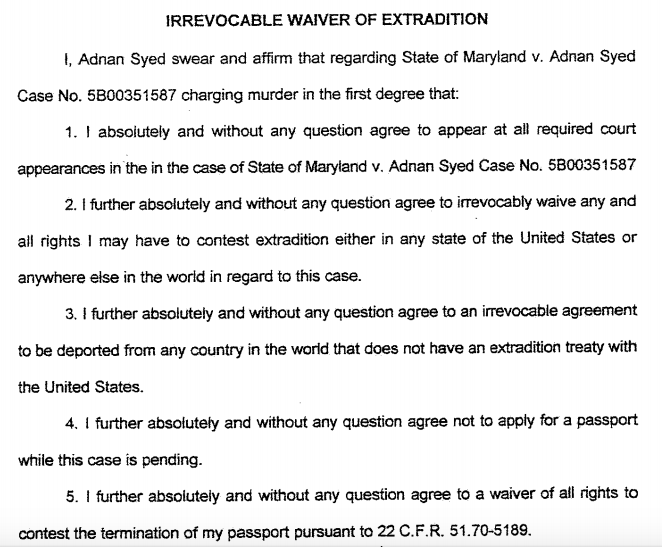 In other words, even though his passport had been expired for about two years, if Adnan, a U.S. citizen, somehow fled to Pakistan despite electronic monitoring, he agreed to extradition to the United States for his trial.

According to Vicki Wash, these proffers weren't good enough because a number of young students who had been jilted committed murder and then fled to Pakistan, creating extradition issues. Wash later apologized for mischaracterizing the information she had received on this issue:

So, were there (m)any murder cases that had led to extradition issues with Pakistan? I doubt it.

Extradition between the United States and the Islamic Republic of Pakistan is governed by the terms of the 1931 U.S.-U.K. Extradition Treaty. 47 Stat. 2122....The treaty applies to Pakistan through its former colonial sovereign, the United Kingdom; as the Pakistani magistrate noted, Pakistan has notified its consent to the treaty. United States v. Bokhari, 757 F.3d 664, 661 n.1 (7th Cir. 2014)

Under this treaty, there can be extradition only if the doctrine of "dual criminality" is satisfied, i.e, if the crime charged is a crime in both the United States and Pakistan. This has created issues in certain cases. For instance, in United States v. Khan, 993 F.2d 1368 (9th Cir. 1993) the doctrine wasn't triggered because there was no Pakistani crime analogous to the United States crime of using a telephone to facilitate the commission of a drug felony. Similarly, the court in Bokhari noted that "Pakistan has not extradited a fugitive to this country in a fraud-related matter since 1984."

Conversely, murder is, of course, a crime in Pakistan, thus triggering the doctrine of "dual criminality." If I had to guess, the cases referenced by Wash were cases involving crimes under U.S. law that are not also crimes under Pakistani law. As such, they would have no relevance to Adnan's case.

Thanks for all your information on this case. It's quite riveting. I have 2 questions
Once Kathleen Murphy had to retract what she said that denied Adnan bail, why wasn't bail then reconsidered? Sorry if this has been explained somewhere before. My second question is whether or not all this ongoing blogging and podcasting about all the State's evidence will in any way affect Adnan's case if (when) he gets a new trial.

I listened to the new Crime Writers on Serial last night. Not sure if you've listened to it, but one of them used to be a defense investigator and she seemed to think that it is exceedingly rare for someone charged with murder to be released on bail and that it isn't much of a disadvantage anyway because usually the attorney will frequently meet with the defendant in jail. Do you think the fact that she worked for the public defenders office would make a difference in her opinion?

Liz: It was Vicki Wash, not Kathleen Murphy. After she retracted her prior statements, the defense did move to have the bail issue revisited. I don’t know whether the court ever considered the merits of that claim again, though. I don’t have a record of it. I don’t currently see a new trial happening.

gc: My understanding from the podcast was that she was saying murder suspects don’t typically get released because, if they are given bail, it is usually more than they can afford. That’s generally consistent with the statistics: 55-60% of murder suspects are given some type of bail package, but only 19% of them can make bail. In Adnan’s case, he could have made bail.

In terms of your latter point, it really depends on the circumstances of the case. As I noted on the podcast, Adnan would have been home when Asia visited his house if he were given pre-trial release. Also, when Adnan discussed the Asia issue, it was with a substitute clerk who apparently didn’t type up his notes of the meeting. Gutierrez frequently sent clerks in her stead to prison to visit Adnan. I think it played a big role in his case.

Do most defense attorneys send a clerk instead of going themselves or does it depend on their case load/profile? I think Laura, the defense investigator, worked for the public defenders office, so maybe they don't have the resources to have clerks doing the work for them so they do a lot of the visits themselves, but since CG was a high profile private attorney, she would have the resources to employ many clerks to do these things for her? And also she clearly had a large case load based on your prior posts.

"That’s generally consistent with the statistics: 55-60% of murder suspects are given some type of bail package, but only 19% of them can make bail."

Again, my guess is that it all comes out in the wash and that the 55-60% figure is pretty accurate for defendants charged with first-degree non-capital murder. But that's just a guess.

Apologies if this has been covered before, but why didn't Adnan's lawyers at time of bail raise the issue of his actual age? Weren't they privy to the charging papers and also wouldn't they have known their client was 17 and thus not eligible for the death penalty, regardless?

Stepping back a second, what is your point here? It seems like you are saying, "Yeah, if Adnan had gotten bail he might have fled to Pakistan, but that's no reason not to give him bail because there's an extradition treaty that could bring him back."

I think that would maybe not be the best thing to say in a bail hearing.

EP: I’m not sure how things went at the initial bail hearing. It might have just been the judge coming to that conclusion without any such argument being made by the prosecution. I wish I had more information.

Looking at data from 1998, for juvenile felony offenders tried in criminal courts, “Fewer than 10% of defendants charged with murder

I'm a little confused about how a Brady claim is raised given it would be a second or third bite at the cherry. Could you perhaps do a post walking us through the process and the standard the court need to reach (presumably something around reopening in the interests of justice)?

C Noir: Yes, that's similar to the statistic that I cited for adult defendants. It covers both juveniles denied bail and those who couldn't make bail. The question is the percentage of juveniles who were given some type of bail package, regardless of whether they could make bail.

Alex: A Brady claim is based on evidence not disclosed to the defense. Imagine, for instance, that the PI talked to Phil and learned that he told the police something exculpatory. That claim could be raised now because it is a "new" claim that couldn't have been raised before.

Asia went to his house on what date exactly? What date was bail finally denied?

You wrote earlier this week: “My current line of thinking is that Adnan will be granted a new trial and that the State will not reprosecute.” So would that mean that Adnan would immediately (or almost immediately) be released? Would the conviction still stand, in the absence of a new verdict, or would it disappear, if the State can’t prosecute? Or would Adnan have to apply for a “pardon” for a crime he didn’t commit? Finally, if a court finds him innocent, then can he make a case that Urick and others intentionally framed him by suppressing evidence, and then sue their nasty selves in civil court? Kudos to all three of you for the amazing work you’re doing on this!

So, he turned in an expired passport. Maybe his unexpired ones was still on him.

Theghostoftomlandry: Bail was first denied on 3/1. Asia visited Adnan's house later in the day on 3/1. Adnan was later denied bail again on 3/31. I'm uncertain of whether there was ever a substantive ruling on the bail issue.

Bev: I'm talking about Adnan's conviction being thrown out via court opinion based on IAC or a Brady violation. If the State doesn't reprosecute, there's no more conviction.

S: There was no other passport.

Hi Colin. Do you know when and where Adnan was transfered to after his arrest and first bail hearing? I thought I remembered SK saying that he went to another facility until he turned 18 in May and was transfered...

Amy: No idea. If you find out, please let me know.

How do you know there was no other passport?

Thanks, I will!
Hmm. Surely there is record of what happened to him after he was denied bail. Do you know where he was residing at the time of the second bail hearing?

If Adnan wins his current appeal, does he get an opportunity to apply for bail whilst the expected future counter-appeals take place? What about if he wins all appeals, but the prosecution do decide to re-prosecute - would he get released/bailed then?

Unrelated question re Undisclosed: Is the requested subscriber information present within the prosecution files http://undisclosed-podcast.com/docs/6/Feb%2018%20Subpoena%20for%20Subscriber%20Information.pdf (ie is the response to this request present) as some of these numbers appear similar to Jenn's pager number http://undisclosed-podcast.com/docs/3/a/Jay's%20Chronology.pdf and it might answer the question as to whether or not it really is Jenn's pager. And if they didn't request Jenn's pager information, then why didn't they, when they requested so much else? And if the responses aren't there, is that another potential Brady issue (if there are some errors in the classification of phone numbers)?

I also listened to Crime Writers. Not to bash them, but its kind of typical to hear, yeah we were all into Serial, but Undisclosed is boring. Too much facts and stuff, like real investigations. Give me the drama!

Anon - Very true. I did wonder what the purpose of the latest episode was given that none of them seem to be up to date on Undisclosed. Well, they did admit they'll do basically anything for publicity.

S: I can't comment on how Colin knows Adnan did not have another passport (although I'm sure he has his reasons), but I know that when I went to update my passport they punched a hole through the old, expired passport so I couldn't use it. Given that the copy of Adnan's passport pictured above does not appear to have a hole punched through it, I would assume that he never attempted to get a new one?