On August 25, 1999, Adnan was visited in prison by one of Cristina Gutierrez's law clerks, resulting is Adnan talking with the clerk about January 13, 1999 and his role in planning Hae's memorial service. Here's the portion of the clerk's memo dealing with these two things:

This typed memo is then followed by: 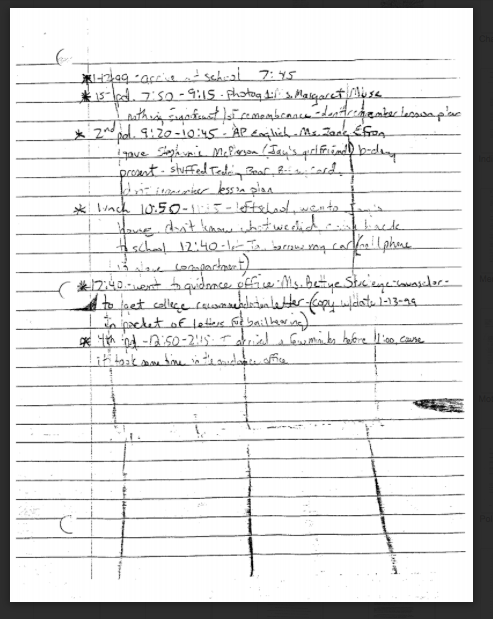 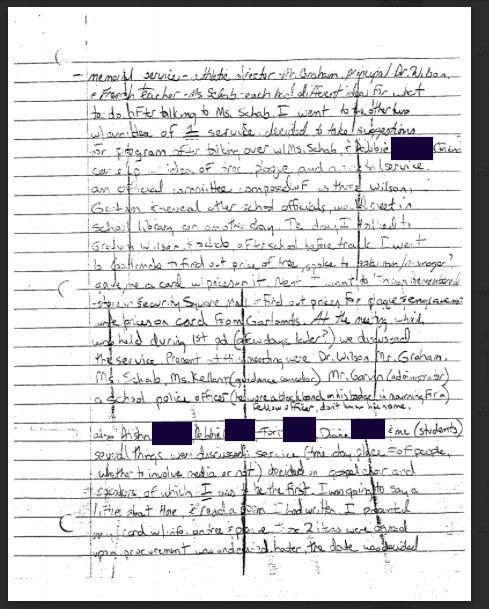 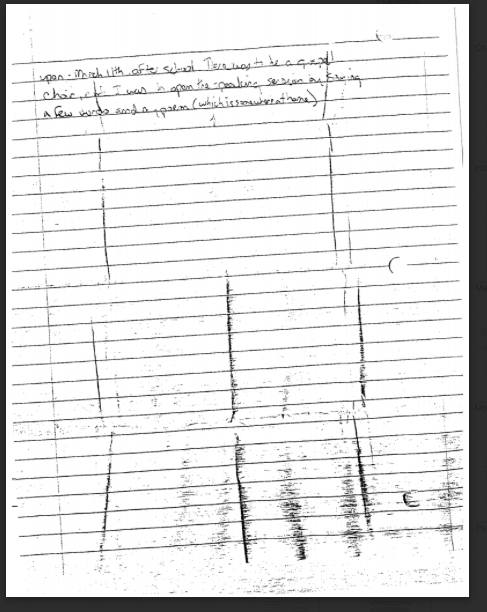 Adnan's schedule has already been posted and discussed elsewhere. Adnan's notes about the memorial service, meanwhile, add important context to the State's claim in its brief that "Syed also elected not to attend the memorial service for Lee, telling Inez Hendricks, another teacher at Woodlawn, that he skipped the service because he and Lee practiced different religions."

Is it notable or unusual that CG would wait six months after Adnans arrest to begin a line of questioning with him about his day. Do you think this interview in August is the first time CG asked Adnan (through her law clerk) to account for his time on Jan 13th. Waiting 6 months to interview Adnan doesn't appear like she's giving him appropriate attention to prepare his defense.

Pdxkat: You might recall that Adnan also laid out his schedule for a clerk on July 13th. That was the substitute clerk. This clerk from August was the primary clerk, seemingly covering a lot of the same ground. I'd love to know what happened with the July 13th notes after they were taken.

Can you clarify if there is anywhere in CG's file where Adnan explains his recollections of his activities AFTER 2:15 p.m. with specificity like he does with his school day? I know he told the clerk he "believes he attended track practice" and that he remembers getting the phone call from Young/Adcock, but it would seem like if he can recall giving Stephanie the stuffed reindeer and going to see the guidance counselor and going to Jay's house midday, he'd be able to provide some detail for the hours between 2:15 and, say, 10 p.m.
(Just to be clear, I am not asking you to post the document, just to tell us if it exists!)

Also, did Adnan not tell CG he went to the mosque that evening with his Dad? The clerk's notes don't reflect that he provided that information.

Jane: In both Exhibit 3 and Exhibit 4:

Adnan has Asia/the library and track practice after 2:15 P.M.

Ok, so no mention of going to the mosque or anything he did after track practice, right?

Jane: As you can see from the memo, he believes that he was in the car with Jay when he got the call from Adcock. In a future episode, we'll talk about Adnan going to the Mosque on 1/13 to prepare to lead prayers on 1/14.

Hairs on my neck stood up when I read that he "believes" he was at track practice. Is this something that a guilty person would say? I'm guessing not. If he was guilty he would be shouting from the rooftop that he was certainly at track practice as part of his "planned" alibi that Jay eloquently discusses.

It is also obvious that Inez's statements were "adjusted" by the detectives. I know Urick doesn't like this case being looked at and swept out from under the rug, but this is transparent, disgusting and shameless.

This entire thing is sick. The Defense needed badly to win at the bail hearing. Looking at the long note about the memorial service is cringe-inducing because this is a snapshot of his communication with CG’s 100 K Defense “team”.

This entire thing is sick.

I know Adnan has never denied possibly being high this night and so am not surprised he says "I probably" and "I believe" about a lot of activities after school. I think it's a lot more bizarre Not Her Real Name Cathy and Jay "remember" SO much.

Is there any contemporary record, i.e. during trial prep, where Adnan accounts for his post-215 whereabouts similar to the handwritten timeline you post here?

My heart breaks reading those notes.

Seeing these notes, imagining an innocent teenager having to write these from the horrors of prison is heartbreaking. Thank you for sharing these and your hard work, Professor.

They also had no idea anything that late in the evening mattered. The affidavits from the police and the disclosures from the prosecution all laid out a scenario in which (1) Hae is seen at 3pm and then (2) disappears "shortly after" she leaves school, and then (3) Adnan calls Jay and the two proceed to a burial in Leakin Park.

Everything's wrapped up by about 5pm, based on the info the defense has.

okdokey and Theghostoftomlandry: Earlier in the comments, I linked to the documents showing Adnan documenting Asia/the library and track practice. As Susan notes, there was no indication in August that the period of time after track practice was important.

If Adnan were innocent then the period where he was hanging out with Jay from 5:30-7 or 8 would be crucial. Are you saying Colbert, Flohr, and Gutierrez never bothered to document this time?

Seamus: Here is what the State told the defense:

This makes it seem like the burial took place right after the murder. This is why the defense didn't realize the post-track time frame was important.

But you said they also took notes on his discussion with Bilal at the mosque. Why would they regard 5:30-8:00 as unimportant and then start documenting Adnan's day after 8:00?

Seamus: The notes in question aren't those types of notes. We will cover this when we discuss the grand jury proceedings.

Surely we can all agree that by trial 2 the defense knew full well the importance of the time after 5pm. Is there no indication anywhere in the files of what Adnan said he did after 5pm?

What is interesting to me is Asias affidavit. What will the judges reaction be when he sees that Urick apparanlty prevented her from testifying with the story that Adnans family pressured her? Will the judge be furious that he was lied to at the last hearing? Or do judges see this all the time...par for the course type of thing?

ScoutFinch2: Right. After trial #1, it was crystal clear that the pre-3:00 P.M. time frame and the post-track practice time frame were vitally important. Unfortunately for Adnan, Gutierrez seemed to do very little preparation between trials. She was out of time for a good chunk of time, some of it involving her work in Puerto Rico.

Thank you for your response. On Serial, Adnan told SK that after track he and Jay would have got high, got something to eat, then he would have dropped Jay off and would have picked up food for his dad and gone to the mosque. Are you saying that is the first time Adnan has ever given an account of what he did after track practice? If CG never asked Adnan to account for his time after track in preparation for trial 2, does that mean she went into trial believing the stated alibi, school, home, track, mosque?

Scoutfinch2: I have no idea. There's obviously the note about Adnan getting the Adcock call when he was his car with Jay. I'm not aware of any other notes in which post-track events were discussed, but maybe I'm forgetting some.

This just is troubling to me. It all feels so suspicious. I'm kinda with Jane. You remember exactly what you do in the day up until the critical time when Hae is murdered and then it becomes vague.

Paul: Keep in mind that every version of Jay's story has Adnan killing Hae between the end of school and the start of track practice. In a prior comment, I included a link to two sets of notes from interviews with Adnan in which he includes Asia/the library and track practice in his timeline from January 13th.