Did Adnan Know That Hae Had To Pick Up Her Cousin at Campfield?

I got an e-mail this morning asking whether Adnan knew about Hae's routine of picking up her cousin after school. Adnan, of course, says as much during the second episode of Serial. The e-mailer, however, wondered whether this was merely a claim that Adnan made in 2014 or whether he likely knew of this routine back in 1999. Let's look at the evidence.

Hae seemingly got her driver's license in September 1998 (Hae's brother; page 45). In October 1998, Hae's mother purchased a Nissan Sentra for Hae to drive; once Hae had her license and car, she was expected to pick up her cousin from Campfield Early Learning Center on a daily basis (Hae's brother; page 48)

In 1998, Hae and Adnan dated in October before breaking up in early November. They were then back together by December 3rd before again breaking up sometime in mid-December.

According to two fellow students -- Debbie and Becky -- Hae frequently gave rides to Adnan to track practice after school, even when Adnan had his own car at school. Here's Debbie (pg. 32-33): 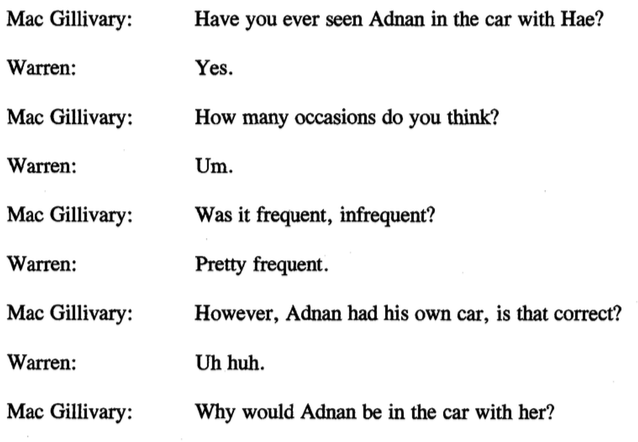 According to Becky, Adnan would continue to get these rides from Hae even after their final breakup in December: 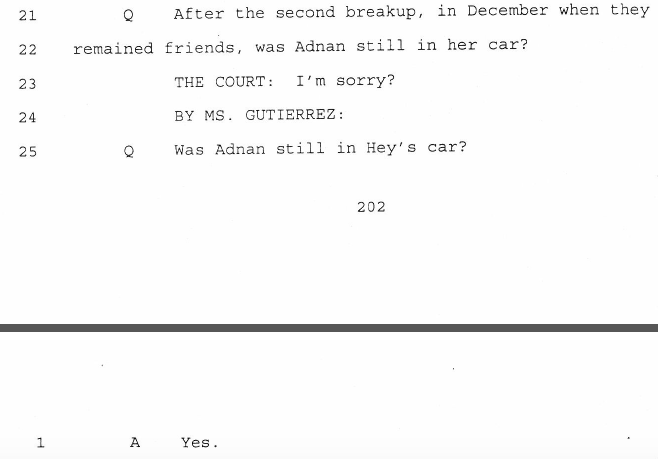 While there is conflicting evidence about the cousin pickup time and the start of track practice, the likeliest scenario to me is that Hae had to pick up her cousin at about 3:15-3:20 P.M. (pg. 31) and that track practice started at 3:30 P.M. (more on this soon). Therefore, on a typical day from mid-November to mid-January, Hae likely gave Adnan a ride to track practice at about 3:00 P.M. before going to pick up her cousin at Campfield. This routine likely occurred both while Adnan and Hae were dating and while they were broken up but remained good friends.

Given this routine, I don't see any logical scenario in which Adnan was unaware that Hae had to pick up her cousin at Campfield.

So premeditating a murder that not only requires an incredibly tight timeline to work, but also assumes she will not pick up her cousin that day seems like a pretty risky plan. So much for the criminal mastermind he's supposed to be...

Colin, looking at this photo of the campus with buildings identified can you (or anyone) explain how Hae would give him a ride from Class to track? Your post says she would drive him from the parking lot. It's a longer walk to the parking lot than it is to the gym.http://oi59.tinypic.com/2uek0lh.jpg

In light of this testimony, you have to wonder why Adnan would say this: "I would-- wouldn’t have asked for a ride after school. I’m-- I’m sure that I didn’t ask her because, well immediately after school because I know she always-- anyone who knows her knows she always goes to pick up her little cousin, so she’s not doing anything for anyone right after school. No-- no matter what. No trip to McDonalds. Not a trip to 7-Eleven. She took that very seriously."

Reply to Greg - Adnan ran in his own sweats, got changed in the car, according to the coach, so why go to the gym before track?

Greg: I don’t fully understand it. We might have an answer from some primary sources soon.

rocknroll: It sounds like Hae would typically remain on campus until about 3:00 P.M. for various commitments and then leave directly to go to Campfield. That’s pretty much what Debbie says. So, I’m assuming that’s what Adnan meant by his comment.

@jhc This was indoor track class. Class was at the gym usually due to weather. One thing that made Jan 13th stand out was they used the outdoor track instead of the indoor track.

Given that Indoor track season started mid November, there is a two month window from start of track to Hae goes missing. Subtract out school closed for Thanksgiving, Christmas, New Years. I wonder how many if any track practices occurred outside aside from Jan 13th. If it is well known that Hae had to leave school right away to pick up her cousin that means she would be dropping Adnan off to track practice before leaving campus when Adnan claims Hae didn't give out rides, at least one hour early and as much as 1:45 early to track practice. That seems unlikely. Adnan seems more likely to use all that down time from class doing something else. like going to the library as he claims to have done on the 13th. Still can't find a reasonable scenario for Hae giving Adnan rides to track practice.

Wasn't the comment, about not asking Hae for a ride because she picks up her cousin, in reply to Sarah asking if AS would have asked HML for a ride to the mechanic to pick up his car (one of Jay's many stories)?That is how I took it but i listened to and read everything Serial (Serial, The Serial Serial, Undisclosed, Serial Dynasty, Serially Obsessed and Crime Writers On plus blogs, transcripts, posts ...) from July 3 to now so things are a little murky.
If so, both would be true: AS asks HML for ride to track because it is on campus and on her way when leaving to pick up her cousin. AS would *never* ask HML to drive him elsewhere after school because HML is on a tight schedule to pick up her cousin.

I feel that Adnam's request for a lift was never sinister. This was just a way of spending time with Hae, no matter how short. It is a typical teenage behaviour when you are 'in love'.

This has always been a key fact, perhaps THE key fact, for me. Adnan knew Hae was picking up her cousin & would never have planned to kill her at that time in broad daylight. I agree with Dawn that walking your friend to their car so they can drive you somewhere nearby is typical teenage behavior.

Is travk practice location on the way out of school on the way to Campfield? If it is the same direction, then there is no reason for HML to turn Adnan down. If it is a differwnt direction, then it makes sense for her to turn him down if she something came up.
On the other hand, if AS wanted a ride off campus, then it explains why she turned him down.

Avid follower of Undisclosed and your blog.
After re-reading Jay's testimony from the 2nd trial, he mentioned a very small detail that has really been bothering me. I just can't make sense of why he included it in his testimony. He stated that after he helped bury Hae, Adnan moved things around in her car. And that he took his sport bag out of her car. Now why would he have his sport bag with him? Why would Jay mention that? It's something that he couldn't have known just by looking into the window of Hae's car, as Susan Simpson discussed in the Jay episode on Undisclosed.
How could Jay know this?
And when Hae gave Adnan rides to track practice was that Adnan with his sport bag?

While called indoor track, high school tens practice outside all winter except if icy or snowy. Meets were held indoors at universities or the armory in Baltimore

Coach Sye was asked by CG in the 2nd trial " Even though you didn't take a formal roll, was there any place that track team members had to go to sign in to show that they were there at practice?"
Answer by Coach Sye "All the athletes had to go to study hall right after school".
I am guessing this is where they met before track practice?
Why would Adnan need a lift to study hall?

Amara,
I am noy sure, but I umderstood Jay was saying that AS was removing HML's items from the trunk. Needs to be confirmed... Otherwise it is interesting, but not real evidence since Jay is not a reliable witness.