As we noted on Episode 7 of the Undisclosed Podcast, the prosecution made the following argument at Adnan's bail review hearing on March 31, 1999: 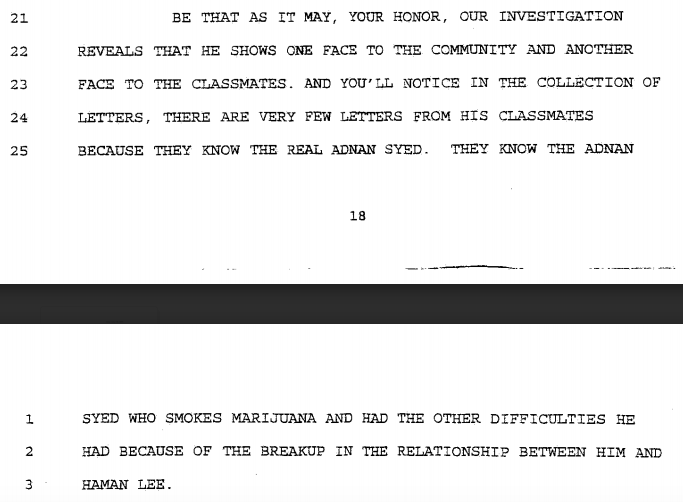 This seems to be yet another unsupported argument made by the prosecution.

Let's start with Adnan's classmate Becky, the witness who says she saw Hae tell Adnan at the end of school on January 13, 1999 that she couldn't give him a ride because she had "something else" to do. According to Becky, Hae was her best friend. She wrote a letter in support of releasing Adnan pending trial: 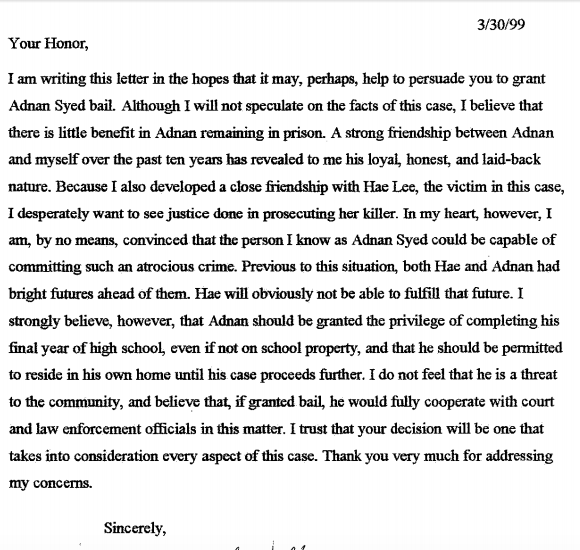 Let's next look at this letter, submitted by the Class President for the Woodlawn class of 1999: 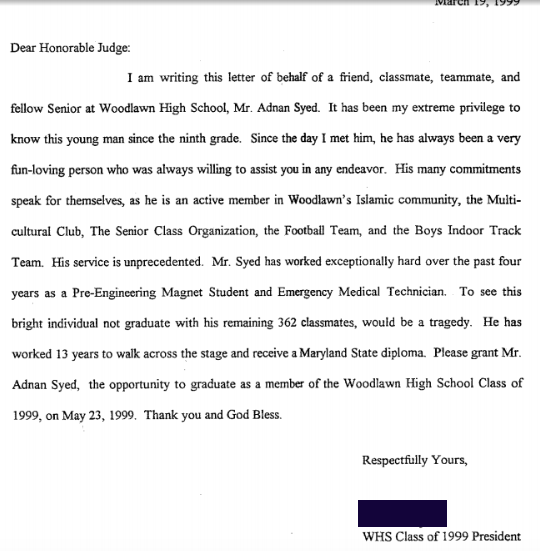 Then, there's this letter, submitted by a student whom we haven't mentioned by name on the podcast, even though she was on the State's list of people to interview: 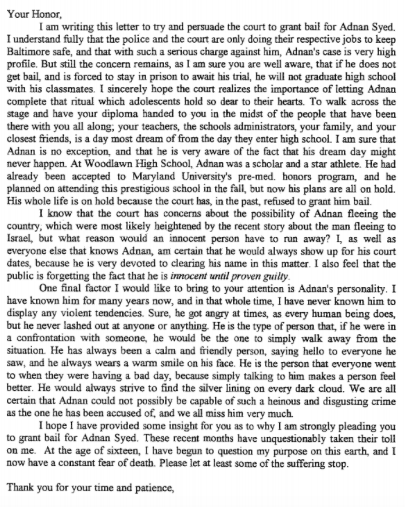 There are plenty of other letters like this, as is made clear in the summary letter submitted by Adnan's attorneys: 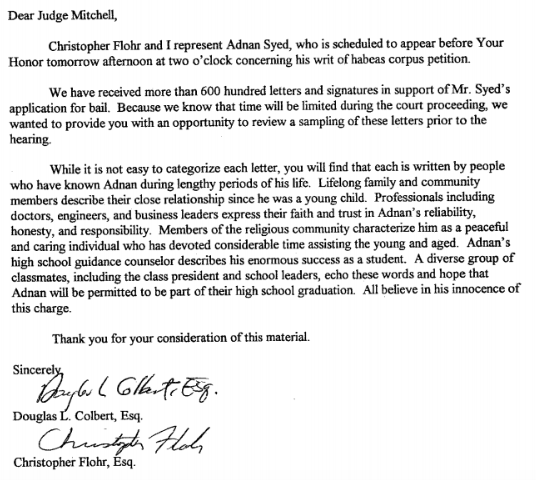 At Adnan's bail hearing on March 31, 1999, the prosecution made precisely two arguments: (1) the Vicki Wash/Pakistan arguments that led to her later retraction; and (2) the "lack of letters from classmates" argument. Neither was based in fact.

Are there any statistics yet on what percentage of first degree murder defendants are released on bail?

Dana from Serial basically said that Adnan is the most ill-fated man on earth or he is guilty. Undisclosed has done a stellar job illustrating how the state's case was total BS and the unlikeliness of Adnan being guilty. But what it has rally driven home is that Adnan is, in fact, on the list of the world's 10 most unlucky men.

Seamus: No, I haven’t been able to find any, but I’m not sure how helpful such a statistic would be. The relevant category for Adnan’s purposes would be juveniles charged with first-degree (non-capital) murder, with no priors.

The question is, of the 600 letters, how many were from classmates? You have supplied three out of 600. I would classify that as "very few letters from his classmates." You said that the prosecutions statement was not based on fact, but you seem to have proved that it was based in fact.

ghost: I haven’t counted how many of the letters came from classmates, but I’m able to say that the final letter is accurate that these letters came from “[a] diverse group of classmates.” For instance, here’s another one: “I am a student from the graduating class of 1999 of Woodlawn High School. I have known Adnan Syed since my days of elementary school. He is a friend to many people who believe in his innocence. It would be greatly appreciated by his fellow companions if you would allow him to graduate along with the senior class of 1999.”

"Be that as it may, your honor, our investigation reveals that he shows one face to the community and another face to the classmates. And you'll notice in the collection of letters, there are very few letters from his classmates because they know the real Adnan Syed. They know the Adnan Syed who smokes marijuana and had other difficulties he had because of the break up of the relationship between him and Hae Min Lee. "

The prosecution said that classmates letters reflected a view of Adnan clearly not reflected in their letters. That is out and out lying on the part of the prosecution.

This isn't about percentages. It's about the prosecution misstating to the court the content and the character of the letters submitted by classmates.

Thanks for the reply and, right, anyone wrongfully convicted is next-level unlucky. But am I extraordinarily naive or is this case in exceptional in its flaws? Do most wrongful conviction cases look like this?

Many wrongful convictions involved false confessions and mistaken (often cross-racial) eyewitness identifications. So, this case is a bit different.

my son was an honors student, football and baseball star and he got caught smoking pot too. does that make him a murderer? I think not. the generalization that went on with this case makes me sick.

Adnans' bad luck stemmed from the detectives and prosecutors who had just enough knowledge to be dangerous and a defense attorney who wasn't smart enough to put a+b=c together.

If bail is rarely if ever granted in cases such as this as you imply Seamus, then why would the prosecution go through such trouble to convince the judge to deny bail? To the point of lying? Your implication falls flat on its face when you consider the lengths the prosecution went to to deny bail to Adnan.

Wow, 3 classmates huh? you really gave it to the prosecution....:(

Nick: Those are not the only letters from classmates. Those are just a few representative examples. As his attorneys' letter notes, there were letters from a diverse group of classmates. I don't have a specific count because, in many cases, I'm not certain whether the letter writer was merely a friend or also a classmate.

C Noir, one doesn't preclude the other. It was about bad luck and prosecutorial misconduct. You're not in jail serving a life sentence. You're lucky. Adnan, not so much, but hopefully that changes soon.

@Colin, you may be correct, however, for you to say the prosecution is incorrect that Adnans classmates mostly didn't help, than you really should bring more to the table than 3 letters you are sure are from classmates.

Great job on the podcast. However after every listen, I'm left with the question of 'why?' and 'is this a cover up?'
Is there any evidence supporting that, beyond what seemingly was uncovered in the episode 'Jay's Day'?
Side note the frustrating aspect of this case have me considering law school. Way to change me life!

Also isn't it a huge discrepancy to not read an individual their Miranda rights as they are being arrested? Which is what happened in Adnan's case, correct? They said something along the lines of "at the station"

Hi Colin, did Adnan have the chance to graduate in prison?

Without any statistics on how often a defendant like Adnan would be granted bail I think it's extremely disingenuous to continue pounding the table on this issue. Common sense suggests that first degree murder defendants are less likely to be granted bail than any other defendants. You can't claim that the denial of bail was an injustice without making an apples to apples comparison.

Where was the judge? Did he/she seek no clarification? Did he/she not ask any of the questions that are so obvious to mere observers? The most obvious being 'How many of these 600 testimonials are from his classmates?' Question answered. Are US judges usually so passive? It's hard to keep Australian judges from taking over a courtroom. They challenge everything.

Nick: I have now posted 4, including the one on the comments. And then, there is the summary letter from his attorneys, which gives you a general sense of the number of students. I will probably post some more good ones tomorrow. How many are there in total? Easily double digits. Again, I’m not sure of the exact number, but enough to contradict the State’s claim.

Shane: We’re working on something in that vein. We hope to be able to report on it soon. The Miranda warnings don’t have to be given to a suspect until the officers are about to interrogate him.

Anecdotally, I’ve been searching Google news and finding several cases in which non-capital defendants charged with first-degree murder are given bail. I have yet to find a defendant under 18 charged with non-capital first-degree murder and no priors, other issues, etc. who was denied bail. That’s not to say that it doesn’t happen, but I feel safe in what we asserted on the podcast.

Colin, here is a legitimate question: why do you continue to respond to Seamus' questions? This is a person who routinely asks questions that are little more than thinly-veiled attempts to change the topic or to call into question your honesty or competence; who has, on several occasions, been called out for making misleading statements on Reddit, only to bluster, obfuscate, and go into hiding when called out for his statements; who takes any ambiguous statement or loose language on the part of an opponent and then accuses that person of lying; and who has on several occasions said point blank that you are lying. It is obvious that he has no interest in engaging in an honest debate with you or anyone, and I am confident you know that to be true. I literally can see no good that comes from responding to his questions. In fact, I think your responses simply encourage his trolling behavior, and I don't think that any amount of politeness on your part will ever lead him to change his behavior. So, I ask in all sincerity, why do you continue to respond to Seamus?

I for one don't mind Colin responding to Seamus and others because it gives voice to the contrary viewpoint. If I have one complaint about Undisclosed is that no one is there to play the devil's advocate. Even though I tend to agree with Colin and his podmates arguments, they can get a bit one sided. Mostly I like a healthy dialogue.