Why Did the State List Mark Pusateri & "Ann" as Prospective Witnesses in its Amended Disclosure?

As Susan Simpson noted in this post, the State made its first disclosure in the Adnan Syed case on July 1, 1999. That disclosure contained the names of several prospective witnesses at trial and some witness statements. Thereafter, at various later points in time, the State filed Amended Disclosures that contained additional information. One of these Amended Disclosures was dated September 3, 1999. 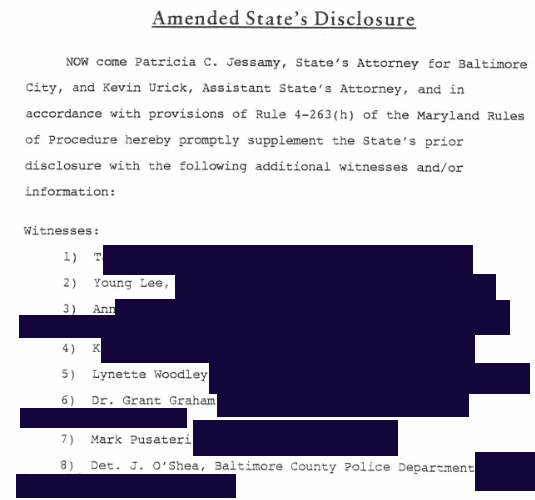 "T" is Hae's uncle. He was the person with the connection to the Enehey Group and was interviewed on February 1, 1999. We have the notes from that interview. "T" was not called as a witness.

Young Lee is Hae's brother. He was called as a witness at both trials.

Lynette Woodley was the principal of Woodlawn High School. She testified at both trials.

Detective O'Shea handled the case while it was under the jurisdiction of Baltimore County. He testified at both trials.

That leaves Mark Pusateri and "Ann." According to Jay, he was at the Pusateri residence, hanging out with Mark and later Jenn until he left and got the Best Buy Call from Adnan. As far as we can tell, Mark was never interviewed by police. "Ann" was the last call on Adnan's call log on January 13, 1999 and a student in the final period A.P. Psychology class with Hae and Adnan. She was interviewed by police on March 2, 1999. The notes from that interview, however, were "lost," and there is no indication that she was subsequently re-interviewed.

[Edit: Someone just e-mailed me about person #4. "K" is Not Her Real Name Cathy. She was interviewed March 9th, we have the transcription of her interview, and she also testified.].

Well, Seamus has been claiming over at reddit, that all notes from the police are entered into a computer data base immediately, so how could they "lose" Ann's interview?

BTW, I have noticed the orchestrated effort by the guilters fraternity to assassinate the character of Asia on reddit, in attempts to scare her out of testifying. It is becoming despicable. As such I wrote to waltzintomodor, to ask why I was called a troll by him and banned. His reply is this- he nows says it is because of my username:

Your name is a thinly veiled attack on another user. Makes it pretty impossible to reinstate this account.

I think it is the moderators at reddit who have become shameless.

It could be that not including these witnesses on the initial disclosure was an oversight by the person that prepared the disclosure. As they continued to prepare for trial, the oversight was discovered. Not necessarily nefarious.

Theghostoftomlandry: I expect that they will be contacted, but by the legal team.

james: I don't necessarily think that there was anything nefarious, but I do think that the State had reasons to believe that Mark and "Ann" were meaningful to the case.

Have you guys attempted to contact Mark and ask him? Doesn't Rabia have a PI at her disposal?

dWakawaka: The defense PI has been reaching out to various people. I don't know whether Mark has been contacted. If any of these people are contacted and have relevant information, we will hear about it at some point.

i would love to hear from both!

A quick follow up question: Did you locate the information about any/all detention facilities Adnan was held at between arrest and his 18th birthday in May? I think I was late to the party last time :)

Shameless_drunken and anyone who cares about actual justice (and not just obfuscating the truth) get on reddit and defend your position! How many guilters do you think have been banned and just come back with a new handle? Waltz gives them a pass, he doesn't really care. The attorney handles are at best one or two users with dozens of alts. Notice how they all show up in the same post to "defend" each other. Highly transparent. Also, Asia, if you are reading thousands of us support you!!

Some folks have speculated that one or more members of the prosecution team may have posted comments on Reddit and/or in various news, blog and social media sites concerned with the Adnan Syed case. I avoid Reddit like the plague, so I don’t know, but I understand that the rhetoric is fiercely partisan. A recent ruling by the 5th U.S. Circuit Court of Appeals upheld Englehardt's 2013 decision to throw out the convictions of the New Orleans police officers involved in the Danziger Bridge shootings, based on prosecutorial misconduct resulting from pseudonymous comments made by prosecutors on news sites. So, my question is, if Urick or any other prosecutors have been posting under names other than their own on Reddit or elsewhere, could this eventually become an issue down the road, should Adnan’s conviction be upheld?

Can you release the transcription of NHRN Cathy's interview? It would seem highly relevant in light of all the questions that have been raised about her recollections of January 13th and her conference.

Wow Shameless! Same kind of scenario happened with me and Waltzintomodor. He used Scout and Seamus harassing me as evidence to kick me out. Then he said I had low karma and didn't care that admin said I was free to post again. He also said I was a troll.

Yeah, the daily deluge of nonsense by the guilters... is... odd.

I think when CM posts something an alarm goes off and they report to duty.

That subreddit is dominated by a few bullies employing logical fallacies when they aren't being downright nonsensical. Hmmm. Maybe it is some kind of trolling project.

Professor, is the fact that these people were on the list (and in Ann's case there is a clear indication she was interviewed) but that there were no interview notes turned over in discovery in and of itself enough to get anywhere Brady-wise? I'm thinking "no", but figured I'd ask.

Can we keep the reddit-griping out of these comments. Given that there's a comment maximum here, I'd prefer to use this valuable space for responses to Professor Miller's posts and his responses to questions.

On that score, the fact that Ann is included in the supplemental witness list actually cuts against the idea that the notes were not truly lost. Because if the prosecution wanted to call her, those notes probably weren't all that good for Adnan.

I do wonder whether Gutierrez ever considered formally interviewing or issuing subpoenas to Mark and Ann. Of course, the danger is that Mark would corroborate Jay's story, and Ann would contradict Adnan's. But it seems like it would be worth it to try to at least interview these two.

Keep up the good work, you guys are amazing.
This is the only reason I look forward to Mondays and your post every other day.

i met a homicide detective the other night at a wedding. We were talking about this case and i asked him if he took notes when interviewing witnesses. He said many do but he was not a good note taker so the first couple of years he would just note pertinent words and would go back to the station later and perhaps write up his findings. He said now, he tapes every interview he does whether defendant or witness. Easier and no misundertandings in court. So perhaps not finding notes in the files is not that unheard of??
NavyMom

Is this post related to the big teaser from Undisclosed about a Brady violation?

Collin, I keep thinking CG may have misfiled important documents among the papers of the other cases she was working on concurrently. Could your team could investigate the other files for misfiled docs?

I can't imagine they would put either of them on the witness list if they hadn't interviewed them. If it isn't NHRN Cathy, who is K? Anyone that's been discussed before?

Prof. Miller, would be great sometime to describe what `due diligence' is for turning over info, and also for archiving it for future scrutiny. How have documents from cases been recovered 16 years later? Are computer records from the prosecution backed up and saved? thanks.

I'm trying to stop myself from necroposting but this seems like a reasonable place to put an update for what I'm doing.

Using the undisclosed wiki I am going through these blog posts in order and copying over comments from certain posters in order to collect a text corpus of each, and from there see if I can't identify who is a sock puppet and how many total users are orchestrating this guilters effort. It's slow going, and I have had fits and starts going through it all. Thankfully each new post has an excellent blog post by Prof Miller to keep me going. I will post my findings when I finish.

P.s. I had the exact same experience on Reddit. The mods banned me for soooo much less than Seamus, Atica, Extrialatty, Adnans_Cell, and the myriad others dish out with impunity.

A joke, that sub is.