On Friday, additional missing pages from Adnan Syed's second trial were posted. As was the case with the prior releases, these missing pages uncover further possible errors by Adnan's attorney, Cristina Gutierrez. The relevant pages here are 252-253: 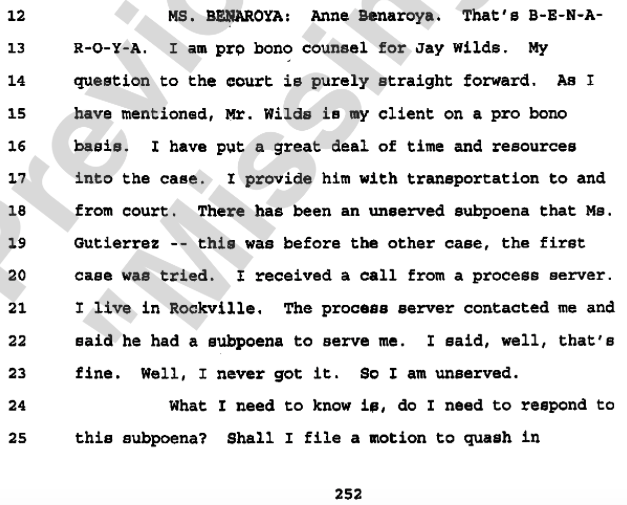 So, Gutierrez refused to talk to Jay's attorney about why she was possibly planning on subpoenaing her. Presumably, she was not one of the five witnesses referenced in my prior posts because I have no record of Benaroya being subpoenaed by the State, and I can't think of a reason why the State would have wanted her to testify.

As noted in Episode 10 of Serial,

[I]n the middle of the second trial, Jay says something. Something that Christina would later call, "the magic information." It happened on the stand when she was asking Jay how Benaroya came to represent him. She asked, did anyone help provide you a lawyer?

I say that Gutierrez stumbled upon this information because she didn't ask Jay this question at Adnan's first trial and therefore had no way of knowing that Urick (allegedly) arranged for Benaroya to meet Jay at his office. And she had no way of knowing this information because she refused to talk to Benaroya about her subpoena. Had she simply talked with Benaroya about her subpoena, she might very well have learned about how Benaroya came to represent Jay or at least had reason to question Jay on the issue at the first trial.

After all, Gutierrez and Benaroya were apparently friends. There are at least a couple of references to this in the defense files:

Instead, like many other people in this case, Gutierrez shut Benaroya down and refused to talk to her.

Why is this important? Gutierrez concluded her cross-examination of Jay at the first trial without addressing the issue of how Benaroya came to represent him. By refusing to speak with Benaroya, Gutierrez failed to learn the "magic information" that she used to hammer away at Jay during cross-examination at the second trial. Indeed, if Adnan's first trial didn't end in a mistrial, we might never know about the circumstances surrounding the retention of Jay's pro bono attorney.

Adnan's first trial, of course, did end in a mistrial. Then, at Adnan's second trial, Gutierrez scrambled after luckily learning the "magic information" and unsuccessfully moved to call Benaroya as a witness. The denial of this motion later became one of the grounds for Adnan's direct appeal.

Imagine a scenario in which Gutierrez does speak to Benaroya before Adnan's first trial and gets some inkling about how Benaroya came to represent Jay. In this scenario, Gutierrez could have drafted a well researched motion in limine, laying out the reasons why the court should allow her to call Benaroya as a witness.

Hi Colin,
I’m wondering if Jay’s attorney was retained and not pro bono, what we might consider that she would have cost him if he had actually paid her? It seems since CG cost Adnan’s family between 50-100K, that if Jay had retained an attorney, might we assume it would have cost 20K or upwards. Would there be any other possible motivation for his attorney to take such a high profile and time-consuming case (one that was obviously going to trial for Adnan) at no cost (other than being a good Samaritan)?. Could CG not talking to Benaroya have been “strategy”? And I think this was covered a while ago, but was Jay’s attorney retained before or after he was charged with “accessory after the fact to murder”? https://viewfromll2.files.wordpress.com/2014/11/jays-plea-agreement.pdf

You're doing a remarkable job uncovering all these missing links in the case. Looking forward to the next episode of Undisclosed!

Iheartegrets: I don’t know how much Jay would have needed to pay his attorney if she were not acting pro bono. She said that she put a great deal of work into the case, so it would have been a substantial sum. But it’s tough to say exactly how many hours she actually worked.

Attorneys do sometimes do pro bono work on the side. There could be any number of reasons why she took the case.

I have a tough time imagining a scenario in which Gutierrez refusing to talk to Benaroya was strategy. An attorney usually can’t call another attorney involves in the case due to attorney-client privilege. Therefore, Gutierrez needed to have a reason to give the court for calling Benaroya. The best source for that information would have been Benaroya herself.

It seems as if Jay met with the prosecutor, met with Benaroya, was charged, and entered into his plea deal all on the same day.

I was just wondering if anyone has contacted or spoken to Benaroya? Or is she unable to get involved due to the pending status of the case?
Seems like she could be very informative if she was a friend of CG and could shed some light on her condition and the time and if she seemed of the ball.
Also why would she work so hard on a case like this if it was such a 'slam dunk' in the states eyes?

According to Ms. Vargas-Cooper, Sarah Koenig had tried to interview Jay’s lawyer, Esther “Anne” Benaroya, and “it was kind of disastrous.”

Keep up uncovering and analyzing every single detail...your (the three of you) hard work has already made it glaringly obvious that Adnan is not guilty. Justice for Hae will be next, once the rest of the pieces come to light.

Has anyone spoken to Adnan recently? Does he realize how many people support him and are asking for justice?

What is the latest on the state's response?

Hi Colin,
Looking forward to listening to more Undisclosed—we always listen on Mondays as we cook dinner. The podcast encourages us to cook something elaborate so that we can listen and chop and dice away, sort of like what y’all are doing with this case. :)
I guess not totally understanding the Benaroya thing. CG stumbled upon, during the 2nd trial, the fact that she was retained pro bono (courtesy of ol' Urick) and subpoenaed her after finding this info? But never talked to her?
Why would have CG talked to Benaroya before the first trial—it seems like CG did not even know the star witnesses’ identity until very late in the game, correct? So perhaps Jay’s attorney would have been a mystery as well?
I can’t help but notice the handwritten note – do you have more context for this? I’m assuming this could be a phone message left for CG because this clerk handwrote “Ben Aurora”. (If the clerk actually spoke to Benaroya, she/he’d asked her to spell her last name.) Or maybe it was a note taken during a meeting with Dorsey, in which case I’d also expect the clerk to get the name spelling to be more accurate. It does seem that Benaroya was trying to make contact.
Thanks for all your work!

Maybe CG on purpose wanted zero contact between she and Benoroya b/c they WERE friends? CG, you said, was confident. Maybe she did not want a mistrial for speaking with Wilds' atty, in some way bringing the fact that they are friends into the case?

MKay: Sarah Koenig spoke to Anne Benaroya: "I called Benaroya about this, to find out if it was true that Urick sought her out and that the first time she met Jay was in Urick’s office, on the same day they signed the plea agreement. She said, “No it could not have happened that way. Absolutely not.” At trial though, Urick doesn’t dispute it. At Jay’s sentencing in 2000, Benaroya says to the judge, “when Mr. Urick first asked me, uh, first mentioned this case to me and asked me if I would consider speaking to Jay...” The Judge, Wanda Heard, agreed with Christina. That this arrangement looked fishy at best."
http://genius.com/Serial-podcast-episode-10-the-best-defense-is-a-good-defense-annotated

MKay: Serial have also said Anne Benaroya was interviewed twice but later asked not to be part of the podcast https://twitter.com/serial/status/553251149881831424/photo/1

Iheartegrets: Gutierrez knew the identities of Jay and his attorney when she was subpoenaing witnesses for the first trial. I think that Dorsey was the process server, and the notes are notes by her clerk about who had been served.

fourhens: I can’t imagine that being the case. Attorneys on different sides of a trial are often friends and talk during the course of the case.

S: She did ask the question…at the second trial. Mistrials, however, are a rare occurrence, and she went through her entire cross-examination of Jay at the first trial without asking the question.

Adding here rather than the Hae's computer post because it's over the comment limit: Is Adnan's phone/sim not still in existence/evidence? Are his commonly-used numbers not saved on that?

I second Cupcake's question and I also wonder if Hae's computer is sitting in a family attic or storage unit somewhere.

It seems unlikely to me that the computer still exists. However, given that her family does not appear interested in getting involved, it's probably even less likely they would want to hand it over to be processed again.