Is Cristina Gutierrez Responsible for the Death Penalty in Puerto Rico?

Back in June, I did a post about a memo to Cristina Gutierrez about how another client was being billed for work done in Adnan's case. That memo was dated September 16, 1999, and the other client was Hector Oscar Acosta-Martinez. I was reminded of this fact when I came across this letter from the following week while reviewing the bail issues in Adnan's case: 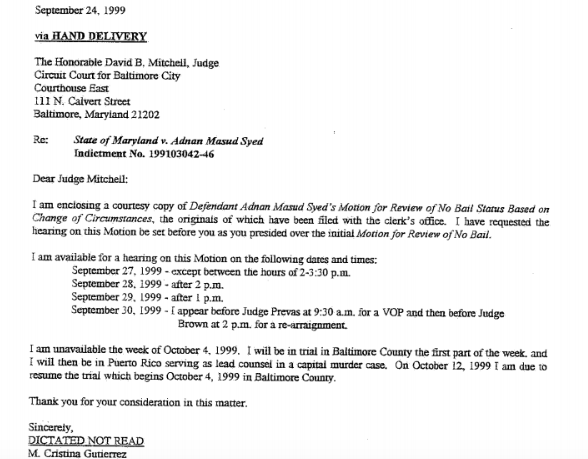 The Puerto Rico case was the Acosta-Martinez case, and the big question in that case was whether the Federal Death Penalty Act (FDPA) applies in Puerto Rico. In United States v. Acosta-Martinez, 106 F.Supp.2d 311 (D. Puerto Rico 2000), the court ruled that it did not. Its reasons were two-fold. First,

Second, the court held that it violated substantive due process to impose the death penalty on Puerto Ricans despite the fact that they are denied the right to vote:

It shocks the conscience to impose the ultimate penalty, death, upon American citizens who are denied the right to participate directly or indirectly in the government that enacts and authorizes the imposition of such punishment. It is unconscionable and against the most basic notion of justice to permit that the American citizens of Puerto Rico be subjected to capital punishment for crimes committed wholly within the boundaries of the Commonwealth, while at the same time denying them a say in the political process of the government that tries them. If the qualitative difference of the death penalty has been sufficient to require more reliable procedures for its imposition, it certainly ought to be sufficient to require that its availability as punishment be grounded, in its origin, on the consent of those whose rights may be affected by its imposition, such consent expressed through their participation in the political process as a manifestation of their free will.

The Department of Justice later appealed this ruling, and the First Circuit agreed with it that the  Federal Death Penalty Act applied to Puerto Ricans in United States v. Acosta-Martinez, 252 F.3d 13 (1st Cir. 2001). Notably, at the time of this opinion, Gutierrez had been replaced as Acosta-Martinez's attorney. Here are the relevant docket entries:

I think these entries pretty well explain the situation. Acosta-Martinez's appellate brief was due in March 2001. Gutierrez failed to file this brief. When the default order was sent to Gutierrez's office, it was refused. Gutierrez's representation of Acosta-Martinez was thereafter terminated, and a new attorney was brought in at the last second. Understandably, all that attorney could do was adopt the existing briefs. As a result, the lead defendant in the case did not have his own brief.

Would the First Circuit have reversed if Gutierrez had been on the ball? It's impossible to know, but what we do know is that her arguments had been successful with the trial court and that she never made her arguments to the appellate court.

Those who have listened to Episode 10 of Serial might recall a very similar scenario playing out in the Zachary Witman case. In that case, Gutierrez won a key suppression motion in 1999. Then, due to some errors that I will be addressing later, an appellate court reversed that order in early 2000. Witman's cert petition to the United States Supreme Court was then due on March 20, 2001. Gutierrez, however, lied about consulting a law professor about the petition, never submitted it, and the last-second petition filed by Witman's new attorney was not granted.

So, what can the the Acosta-Martinez and Witman cases tell us about Gutierrez's representation of Adnan? I'll delve more into the details of the Witman case in a future episode. What I find interesting, though, is that Gutierrez was handling three first-degree murder cases in three different jurisdictions in 1999/2000: (1) Adnan/Maryland/; (2) Witman/Pennsylvania; (3) Acosta-Martinez/Puerto Rico & Federal. I'm not sure that this simultaneous representation is unprecedented, but I have to think it's exceedingly rare for an attorney to be handling three different murder cases in three jurisdictions at the same time. We know that she dropped the ball in at least two of those cases. Many would argue that she also dropped the ball in the third.

Did CG handle these cases by herself with just a couple of law clerks? Or did she have a larger staff for the other court cases?

What prevented the new lawyer from requesting additional time?

Pdxkat: I would love to know.

Seamus: The new attorney made his first appearance on April 12th. He moved for additional time and was given until April 25th to file his brief. That apparently wasn't enough time for him to file his brief. If Gutierrez failed to respond to him like she failed to respond to the court, it would have made it very difficult to write the brief in 13 days.

Seamus, how shameless you should be to try slander Prof. Miller on daily basis and yet find the audacity to come here to ask him questions.

Here's what Seamus really says about Prof. Miller, accusing him of lying, hiding evidence, and finally, trying to hack his IP address. Of course Prof. Miller is a gentleman and has been putting up with you and answering your questions kindly as the nice person he is, but you, you have no shame Seamus.

CG's health had declined substantially and was in hospital during this period; she eventually agreed to disbarment in May 2001.

"M. Cristina Gutierrez, one of the Baltimore area's most ferocious criminal defense lawyers, has agreed to her own disbarment, marking the end of an accomplished law career.

The state Court of Appeals ordered her "disbarred by consent" May 24, after Gutierrez agreed to resign rather than fight complaints filed against her with the state Attorney Grievance Commission, which investigates allegations of wrongdoing by lawyers.

Reached by telephone yesterday at her home in Towson, Gutierrez, 50, said she suffers from multiple sclerosis. "I am not physically able to keep practicing," she said. "I can barely walk."

She said she was in the hospital for much of the winter and has gone blind in one eye. "Since I can't defend myself against anything, and I can't practice anyway, I decided to sign the consent."

Melvin Hirshman, bar counsel to the Attorney Grievance Commission, said his office took over Gutierrez's client files about a month ago, after another lawyer informed the commission she was too sick to handle her practice."

Nine9fifty50: Yes, I definitely have sympathy for Gutierrez. Like her, my grandfather had MS and it is a truly debilitating disease. I'm sure that this had a large role in her decline in performance from 1998 or 1999 through 2001. She should have withdrawn from her cases when her health declined, but instead, she left a lot of clients out to dry.

My point is just to add context to CG's failure to file the brief due in Mar/April 2001. Her health had declined precipitously by Fall/Winter 2001 and she was no longer physically able to represent clients. A month later in May 2001 she agreed to disbarment.

Nine9fifty50: Yes, I believe that she was hospitalized in December 2000. I don't know what led to her failing to withdraw from her cases, ask for continuances, etc. What I do know is that it put several clients in dire straits.

seriously, Seamus...who do you think you are????

If CG was failing to respond to court communications and was under disciplinary review, I fail to see why the courts wouldn't provide more time to new attorneys, if only in the interest of a fair trial.

Courts do not have to be fair as we all know. We hope that they are. We want to believe that they are. Sometimes their hands are tied. Sometimes judges are just jerks. But expecting "fairness" at all times is a somewhat juvenile expectation. Life is not always fair.

Yet another example of Gutierrez dropping the ball; or, as Seamus might call it, a run-of-the-mill appeal.

Elaine - I disagree that it is a juvenile expectation since it leaves the door open for mistrials or appeals based on incompetent counsel or on other grounds. Certainly the courts do not have to be fair but you would think it would just be pragmatic to do so.

to anon:
Seamus is a strange one and I agree, seems very connected to the case. I love that he is the first person who responded to Urick here: http://thedailyrecord.com/2015/02/11/letter-to-the-editor-the-prosecutor-responds/

He writes almost defensively about how Asia attempts to impugn Urick s character and clearly he has not carefully read the affidavit to which he refers; he baselessly maligns a key witness who can trample on this case.