Hae's Brother Comments on What Happened to Her Computer

As was the case with his prior comment, this comment gives us some valuable additional insight into the investigation.

Here's the discussion of Hae's computer on the Serial website. Here are the relevant portions of the two Progress Reports referenced in that post: 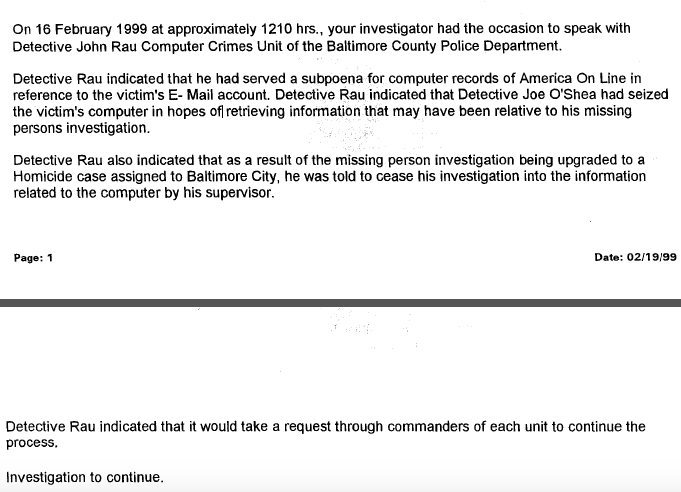 So, at some point on or before February 9, 1999, (1) Detective O'Shea (Baltimore County) seized Hae's computer "in hopes of retrieving information that may have been relative [sic] to his missing persons investigation;"* and (2) Detective Rau (Baltimore County Computer Crimes Unit) "served a subpoena for computer records of America On Line in reference to the victim's E-mail account."

Thereafter, on or before February 16, 1999, Detective Rau "was told to cease his investigation into the information related to the computer by his supervisor...as a result of the missing person investigation being upgraded into a Homicide case assigned to Baltimore City." On February 16, 1999, Lieutenant Keel of the Baltimore (City) Homicide Unit requested assistance from the Baltimore County Computer Crimes Unit, which led to "Detective Rau stat[ing] that he would obtain a Search and Seizure Warrant for the contents and information."

As noted by the folks at Serial,

And that’s the last we hear of it. There are no more reports on the topic and nothing in the case file relating to the results of the search and seizure warrant.

The Baltimore City Police Department told us they never had Hae’s computer in their possession. So we asked the Baltimore County Police Department where it ended up. After four months and some gentle reminders about public information laws, the County got back to us: "At this time, we have not found any additional items including the computer, records, or reports."

Adding Young's comment to the mix, I think that everything makes sense: Baltimore City never got Hae's computer, and Baltimore County no longer has the computer because they returned it to Hae's family a couple of weeks (or so) after it was seized by Detective O'Shea. So, the computer likely would have been returned sometime in February or early March, 1999.

Given the timing of the computer's return and the lack of documentation, the safest assumption seems to be that Baltimore City never received any information about Hae's computer or her AOL account.** It seems like Detective Rau and/or Lieutenant Keel would be in the best position to contradict that narrative. Assuming they can't, it seems clear that the Baltimore City police lost the opportunity to investigate a possible goldmine of information that could have pointed toward Adnan's innocence or guilt.

*According to the folks at Serial, this was in part because "Hae wrote in her diary that she had copied parts of the diary into her computer."

**The other scenario would be that this information was received but never documented/disclosed.

Amy: I wish I knew. All we have is the report posted on the Undisclosed website.

So, does that mean that there was only one diary?

S: Hae's brother said that Hae may have transcribed diary entries on her computer, but he doubts it. Serial did a post which stated that "Hae wrote in her diary that she had copied parts of the diary into her computer."

Since Det. O'Shea seized Hae's physical computer as part of the missing person investigation, why would he need a warrant to search her computer? They copied and searched her diary, bank accounts and other personal items during this time. Couldn't Rau have copied the hard drive and/or been searching the computer and reporting to O'Shea while waiting for the subpoena of the AOL account to come in?

When it became a homicide, Rau said he was instructed to "cease" his investigation into the computer pending approval by commanders of each unit. Balt City gets the approval from the commanders for Rau to continue with the subpoena and the search of Hae's computer.

I don't see how you conclude that the computer was never searched before being returned to the family.

Nine9fifty50: I don't even know whether Rau had the physical computer in his possession. A for whether it was searched...I don't know. The possibilities are that (1) it was searched but never documented or disclosed; or (2) it was never searched. My guess is that (2) is correct, but I could easily see (1) being the truth.

I thought the diary was on the floppy disk..

Danielle: I'm not going to post the entry from Hae's diary, but I think that the post on the Serial website combined with the comments we made on Undisclosed give you a pretty good sense of what it says.

My guess is the computer files did not further their narrative, and maybe even hurt it, and so they didn't disclose.

It's hard to believe that Balt. City homcide would go through the trouble of getting approval by commanders of both units; Rau says he will continue with the investigation and get the necessary warrants; and then Rau does nothing else; and Balt. City and Balt. County simply return the computer without searching it and are not interested in reviewing Hae's emails, especially given how prominent a role Hae's diary entries played in the investigation and prosecution.

Again, where is Guitterez on this? She knows everyone has a computer. Used more than cell phones at that time.

I agree with Greta. Maybe some evidence to this theory will turn up.

What about the AOL subpoena? Did they ever produce anything? Would they still be retaining records going back that far (I'm sure not for every user account, but if they responded to a subpoena their legal department probably has its own record)?

What we do know thanks to Hae's brother is that the computer was returned to the family.

Otherwise, we're no further than where we started: The possibilities remain (1) the computer and email account were searched but the reports are not in your file (2) the searches were never documented or disclosed; or (3) they were never searched.

Unrelated to this specific post, but if we think the number that the State said was Jenn's pager wasn't actually hers, has anyone asked Adnan who it might have been? Maybe I'm weird, but I'd still recognize some numberd from high school and I graduated the same year. Back then, you had to have numbers memorized because you didn't have a phone to store it in. I probably couldn't still tell off the top of my head, but might recognize a number if you showed me.

Another thought... Does this number show up on the call records any other day? You'd think if it was Jenn's pager, it would only show up on this day (or perhaps another time he was with Jay later, but not very often).

Or maybe if it is one of his friends, Krista might recognize it? She seems willing to help and also seems to have a pretty good memory.

I agree with GC. I still remember some phone numbers from high school and even elementary school. One assumes that Jay and Jenn told the police it was her pager number so if it does not belong to her it could be that they are trying to protect a significant third party. I guess the difficulty becomes who to ask?

Another interesting question for Hae's brother: Where is the computer now?

Is Adnan's original phone/sim in existence/evidence? Are his commonly used numbers not saved on that?

It seems CG has already covered this territory - she cross-examined Det. McGilveary heavily on this issue on 2-18-2000 at pages 17-24. On two occasions, CG makes the point I raised that since the diary was so prominent it would make sense that missing persons and homicide would have wanted to search the computer and emails (p. 18, 21). McGilveary's response that he was not made aware of the information on the computer (p. 18) and that searching the computer and reviewing her emails was not important to him is definitely fishy (p. 21-23). He says the approvals were obtained for Det. Rowe to obtain the search warrant but they actually never did anything with the computer (p. 19).