After yesterday's post, I realized that there was one witness who had his interview at Woodlawn High School recorded: Adnan's friend Ja'uan, who was referenced in Episode 5 of Serial. Indeed, during the episode, a portion of his recorded interview -- in which he said that Adnan and Hae used to hook up in the Best Buy parking lot -- was played. Here is the Progress Report for his interview: 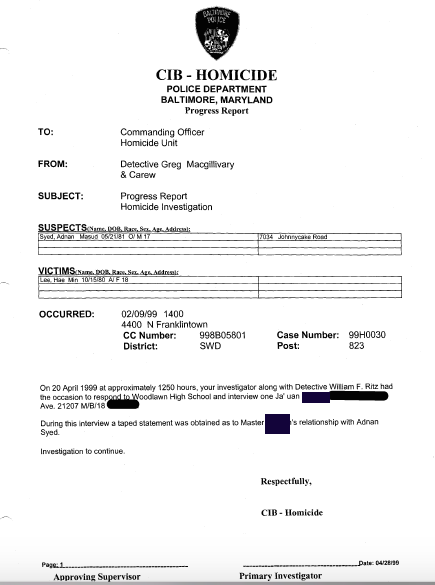 As with other Progress Reports, the witness's name is listed and we have the cover sheet for the interview: 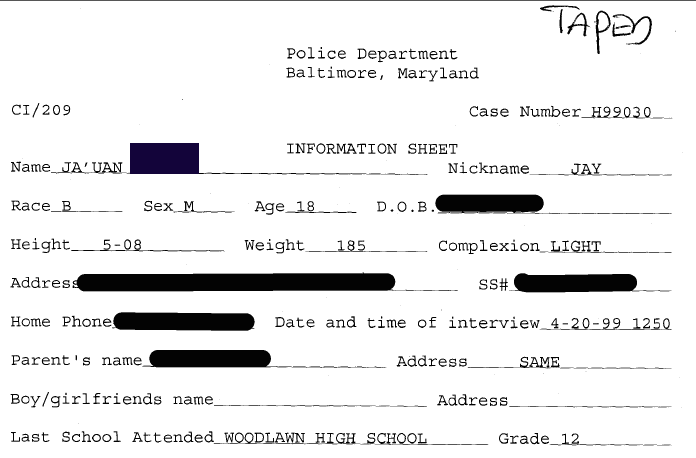 Like for some witnesses, but not for others, we actually have Ja'uan's interview. We will play clips from it in a future episode.

So, this is a bit of a call for information. If you are not Jay, Jenn, Debbie, "Cathy," or Mr. S and you were interviewed at the police precinct in connection with the Adnan Syed case, let us know. You could just be the key to this case.

Come out, come out, wherever you are! Please help put all of the speculation to rest. Tell us what most already know...that bmore police really dont care who committed the crime, as long as SOMEBODY goes down for it.

Does anyone know if Adnan and Jay have kept in contact? I wonder if the reason for all of Jay's lies/revisions, etc. is that he was trying to get a deal from the police and trying to help Adnan at the same time. If he gave the police what they wanted, they would leave him alone, but if he effed up all the details enough, no jury would ever convict Adnan.

Cindy! There's a theory that I can get behind!

@Shi, the problem with this theory in this case is that it would have been much easier to pin the blame on Jay.

IMO Jay is guilty, he's framing Adnan because he was in possession of Adnan's property during the murder... Jenn was his accomplice and possibly a third party... Which is why J&J have tried so hard to corroborate their stories, from the beginning. However many times Jay has retold and changed his story. The parts that include Jenn seem to not Change much? That alone seems odd.
Mahalo Colin, Susan and Rabia for all I've your time spent on this case. Serial caught my attention, but Undisclosed has captured my heart. This case is devastating painful! I know Adnan will be exonerated, because of you three!

Just noticed in the related Undisclosed document that Hae's AOL profile was last checked on 1/16/99. What are your thoughts on that? An error? One of her friends? Thanks.

Do you all still have jobs? I just can't understand how you find the time for the amount of research you must have to do every week. Adnan is very lucky to have you right now.

KD: I figured that was the date the report authors checked the profile to inform the report, rather than when Hae last checked it.

I think either Jay framed Adnan, or Adnan did it and Jay tried to save him from getting convicted. I think Jay was probably very surprised that they were able to find Adnan guilty with all of his lies and changes.

This would explain why Jay used this in his obviously fabricated murder story. It was in the back of his mind, that Hae and Adnan often had sex in the Best Buy parking lot, and he plucked it like a ripe piece of fruit and plopped it in his farcical tale.

I finally completed my podcast. Here's the link.

Cupcake: That makes sense. Thanks!

I read somewhere (gawd, can't remember!) that Stephanie had confided that she was "interested" in Adnan. Could Jay have found out about this and plotted to have Adnan eliminated, so to speak? also, Jen did not like Hae. It seems strange that on Stephanies birthday (as well as Hae's day of disappearance) Jay did NOT spend any time with Stephanie and instead spent time with Jenn.. Jenn's & Jay's stories of the day's event do not match, but strangely enough ONLY their alibis match.. this is highly suspicious...

What do you all think of the interviews with Jay on Firstlook? There is a tiny detail that bothers me about when he describes how he first hung out with Adnan. He attributed it to Stephanie saying how "Adnan is cool, plus he wants to buy. (weed)" But, in a police interview with Stephanie, she says that Jay smokes in front of her often and buys often. She states that she "lives a more conservative lifestyle." My question is why would Stephanie urge Jay to hang out with Adnan because he "wants to buy" if she seems to have been separated from that part of Jay's life? This is a minute detail but I think it just shows how much Jay fabricates things and points the finger at everyone but himself.

Sorry to Necropost but this thread needs a bookend, you know for posterity. "You aren't gonna believe this, but there is someone on the Internet, who is WRONG!"

I'll be blunt, Cindy's theory is one of the more bizarre and illogical I've ever heard. What I mean is this: If jays goal was for adnan not to be convicted, why on earth wouldn't he just yaknow... not confess to being part of the crime at all?

Remember: there's precisely zilch tying J or Adnan to the crime prior to Jay claiming J and Adnan were tied to the crime. The cops only looked into the cell phone records bc of a hunch that maybe the random tipster who gave verifiably wrong information about where the body could be found (was Hae or her car found in a lake?) was maybe still right that the ex-boyfriend did it? Someone in Jay's shoes thinking "I don't want my friend to get in trouble. I don't want my friend to get in trouble" isn't going to say when approached by police, "Omg officers, my friend killed her! He did it but I'm gonna keep changing my story over and over so he won't get in trouble!" That Jay thought up this is illogical enough by itself, but the idea that this was actually originally Adnan's instructions given to Jay is rocket-outta-this-world nonsensical! Who on earth would devise such a stupid plan??

Put another way, "I know it looks like that horse is gonna keel over and die trying to push that enormous cart in front of it, but I swear this is the only arrangement that makes sense"