A commenter on yesterday's post adds additional context to my prior post about Hae Min Lee's computer. In that prior post, my tenuous conclusion was that no search of Hae's computer was done before it was returned to her family. Now, assuming that testimony given by Detective MacGillivary is correct, that conclusion becomes a lot less tenuous and a lot more troubling. 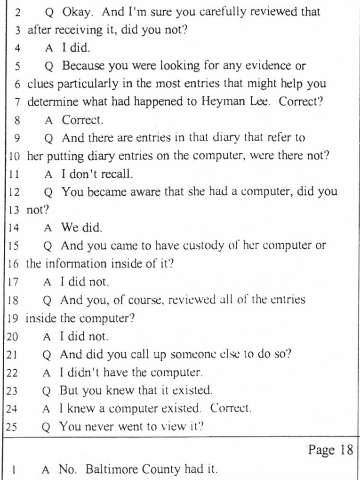 Here's MacGillivary testifying to his belief that Baltimore County never did anything with Hae's computer despite stating that they were going to execute a search and seizure warrant on it:

So, why was nothing apparently ever done with Hae's computer? The likeliest reason is that MacGillivary thought that the computer and Hae's electronic communications were unimportant to the homicide investigation: 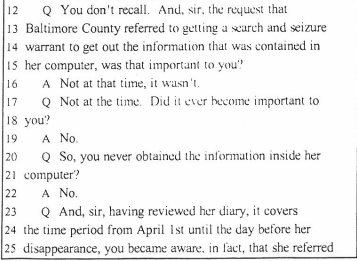 Did MacGillivary make the right call? You might recall that Becky was interviewed by Detective MacGillivary. In that interview, she stated that there was talk at lunch about Hae giving Adnan a ride on January 13th, followed by Hae telling Adnan at the end of school that she could no longer give Adnan a ride because she now had "something else" to do.

I agree with above, but didn't you read MacGillivary's testimony when reviewing the transcripts? Why present the issue of the computer search as if this were an unresolved question (by linking to the police status reports only) and not acknowledge that CG had already covered this territory at trial?

Nine9fifty50: I did read it at some point, but it's gets tough to recall everything when you've read so much about the case. Thanks for reminding me about these statements.

As far as I'm aware of, the police never investigated Haes day. From the very beginning, the focus was on Adnan. The police investigation consisted of an effort to convict Adnan rather than investigate the crime and determine what happened to Hae. We have no information about the computer class because that was not a class she shared with Adnan.

Police didn't speak to Haes teachers unless those teachers were also Adnans teachers. The sole exception was Hope Schab, Haes French teacher. Ms Schab wasn't simply interviewed; police somehow co-opted her into conducting her own unofficial investigation into Adnan at the school by asking students and staff questions (and using other students to ask questions) and then relaying information back to the police. She even testified she was in constant contact with the police and talked to them daily. Unfortunately none of the information Hope Schab gathered for the police about Adnan is documented anywhere.

Gutierrez could have subpoenaed the computer herself if she had reason to believe there was evidence that would help Adnan, right?

Seamus: Yes. That would have been a very wise thing for her to do.

That would seem to suggest she had reason to believe the contents of the laptop would either be unhelpful or harmful to Adnan's case. Instead she chose to use it to imply the investigation was inadequate.

Seamus, when do you think CG knew that the investigators didn't do their job?

BTW, I was banned from Reddit, because I suggested that some people like Seamus might be more involved in the case than they let on. I didn't even say anyones name specifically. I just said the Baltimore people seem to know each other. I think that is a strange reason to ban me.

Have you read Hae's diary? Does it truly say that the "copied" diary entries onto her computer? If so, wouldn't the hard copy of her diary and the "copied" entries be the same? It didn't say she kept a second diary there and Young Lee says that he'd be surprised if she kept a diary on the computer since he used it too.

The email is a different matter, of course.

Seamus: The other interpretation is that, as with many other things in this case, Gutierrez dropped the ball.

Jane: I really don’t want to post portions of Hae’s diary. We have the comment about the entry from the Serial website and our discussion on Undisclosed about Hae putting diary entries on her computer/floppy disk so that her brother wouldn’t see them. I will leave it at that.

Perhaps she did drop the ball and was trying to put lipstick on the pig with her questioning or perhaps it was strategic choice. What I don't know how to do is to choose between those two conflicting narratives. I think this is a good example why the law only prohibits incompetent attorneys and rather than especially good attorneys. She's not here to defend herself and so it is easy to pick on her.

So Gutierrez knew about the computer, knew the police didn't check it out, remembered to ask about this at trial, but just forgot to check out the actual computer?

"We have the comment about the entry from the Serial website and our discussion on Undisclosed about Hae putting diary entries on her computer/floppy disk so that her brother wouldn’t see them. I will leave it at that."

She didn't ask you to post it, she asked if you (not Susan or Rabia) read that in the diary or is your source of that quote Serial or someone else and what the wording is of the quote. She has a point, "copying" wouldn't mean it's different.

Aside from the diary info perhaps there was other correspondence such as e-mail or chat that might have been helpful.

When was the last time someone contacted America Online and requested that they provide any archived info related to Hae's email account? I assume that in 2015 those are long gone into the ether, but curious when they were last requested or if they were ever requested.

Very odd you were banned for implying that. Someone must have flagged you repeatedly or something, although I don't use Reddit really at all, have only perused the Serial stuff two or three times.

In what capacity do you think some people on Reddit are more involved than they let on? We know that folks from Adnan's mosque have likely used it (Bilal), Adnan's brother has been active on there from what I've heard, and I think we recently saw a post from Young Lee, right?

Do you think that people associated with the State of Maryland, Baltimore City PD, and/or Baltimore County are engaged on there and/or on here?

Daniel: There are certainly questions about why Gutierrez didn’t do more to look into Hae’s computer, e-mails, etc. This post, though, is about why MagGillivary failed to looked into these things. Of course, he wasn’t obligated to do so, but it seems like they would be pretty high on the priority list if you’re trying to figure out what happened.

Seamus: I could say the same thing about any number of Gutierrez’s decision in the case. For instance: Gutierrez knew about the lividity evidence, knew that it didn’t match the burial time (or maybe she didn’t know this), remembered to ask about this at trial, but just forgot (or whatever) to hire her own expert or ask about how long it takes for lividity to fix.

monstimal: I have read the diary entry, and my conclusion is that Hae there were diary entries on the computer/floppy disks that would not have been in her print diary.

Jake: I know Serial looked into it.

Colin, i thought i recalled that from Serial...but do you recall what response AOL gave them? Would AOL be beholden to release that to investigative journalists such as Serial? I would think they'd only be available via subpoena.

I can go back and listen to Serial for this info when i have the time, but if anyone on here recalls the last time they were requested (by Serial or anyone else) and the response they were given, please refresh my inundated mind.

I recall Rabia discussing that inquiries had been made to Adnan's email provider (Microsoft, I believe?), and no records exist that far back.

ya, i recall Adnan's hotmail account but nothing regarding Hae's AOL account. I would guess the same results (or lackthereof), but don't recall.

Regarding the "something else" that came up… Seems like it's more credible it was a page, because Hae's pager went missing. There's no reason for Hae's killer to steal the pager unless it has something possibly incriminating on it - like their phone number.

Unless there's a serial killer who collets pagers as trophies. :)

Jake: I believe that AOL said the records no longer existed.

Nine9fifty50: Yes, hopefully there is something else of use in there.

Lilla: My leading theory is still that Hae was paged. A few people have e-mailed me to point out that it’s possible that Hae didn’t even have internet/e-mail access in her computer class. That could have been the case. The problem is that the State never interviewed the computer teacher or anyone in that class, so we have no answer to this question.

I believe someone mentioned something about a tower dump the other day. Is that where they get the info from a cell tower? If so, could they get that info from the towers near the high school for Jan. 13th and find Hae's pager #? And whichever company was the service provider for her pager does not have a log for her number, correct?