Yesterday, in the comments section of my blog, I noted that it is difficult to determine what documents Cristina Gutierrez had in the Adnan Syed case because his case file has a number of documents from other cases. In response, I've gotten some questions about the nature of these documents and whether they might have had some relation to Adnan's case. The simple answer is that these documents have no relation to Adnan's case. I can't really post most of these documents, however, because they contain information that is covered by attorney-client privilege. That said, there is one document that I feel comfortable posting, albeit in heavily redacted form. 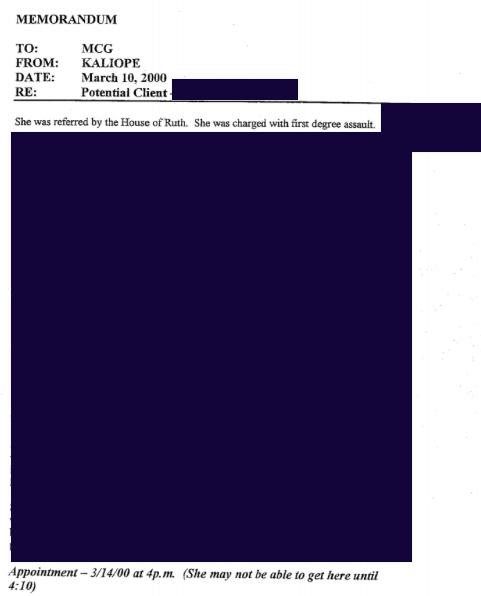 I'm comfortable sharing this memo because it is regarding a prospective client, and the information contained in the memo doesn't even seem to come from the prospective client herself. That said, I don't want to broadcast the details of the case, which is why I have redacted it.

Still, you get the general sense of the memo. Someone from the House of Ruth has called Gutierrez's office and relayed the details of a case in which a prospective client has been charged with assault. The memo is dated March 10, 2000, so it is after Adnan's conviction and during the process of preparing for sentencing and the motion for a new trial. It's hard to image any relation to Adnan's case; this is simply a memo placed in the wrong file.

What about the other misplaced documents? There are some memoranda from other cases. There are correspondence. There are pieces of evidence. As far as I can tell, none of them have any connection to Adnan's case.

Maybe some of the missing docs for Adnan are in files of her other cases?

Does it make you concerned that the same thing may have happened with Adnan's file? Meaning, information from his file is in some other Gutierrez client file?

Could then missing documents from Adnan's case be found in the files of other clients of Ms. Gutierrez?

Louise, sara p, and Andrew Taylor: Yes, that's exactly my concern. Some of the documents from Adnan's case might be in the case files for other clients.

So was I correct in asserting that Asia's letters are not in the defense file?

Can other files of clients being represented at the same time by CG be gone through by someone?

fourhens: That would be an arduous and likely futile task, given that it's doubtful the other clients would waive attorney-client privilege.

Doesn’t that mean there’s no proof anyone from the defense ever actually saw these letters? The only evidence we have that they heard of Asia were handwritten notes from a clerk and from Gutierrez, and the information in those notes simply doesn’t match what’s in the letters.

Seamus: Sure. It's possible that Adnan told Gutierrez and her clerk about Asia but didn't turn over the letters. I'm not sure why he would have done that, but it's a possibility. Again, though, if that were the case, a huge part of the Circuit Court's opinion denying Adnan relief would be invalid because the letters wouldn't have been a possible reason for Gutierrez to fail to contact Asia.

If Adnan didn't give CG the letters, however, he also perjured himself at the PCR hearing, correct? Also, if you haven't gone through every document in the defense file, how are you able to speak to what is and is not in it? Is it possible there is a record of CG following up on the Asia alibi in ways other than contacting Asia directly that you haven't seen yet?

Colin: In your experience how common is this kind of thing? We have this, we have CG mixing up Aisha for Asia in some documents, I believe she billed one client for another client's work. All of these seem like pretty big deal to me, are they as big a deal as they seem?

Jane: Perjury requires intent. I assume that Adnan either gave or showed Gutierrez/her clerk (copies of) the letters. If he didn’t I’m guessing that he thought he gave/showed them copies of the letters. After all, we know from the notes that Adnan told Gutierrez and her clerk about Asia in some detail. I don’t know why he would fail to turn over the letters or intentionally lie about turning them over.

As I said, I haven’t looked at every document in Adnan’s case file. I can say that certain things are in the file, but I can’t state with certainty that something is not in the file.

absurdamerica: They are a big deal. It definitely explains the record number of client complaints brought against her.

I don't know, Professor. I think if CG was repping me at that time and I knew that there is a possibility my file may contain something of importance in a process such as this, I certainly would say - have at it or would at least request I be allowed to look myself? Where physically are CG's files kept now?

I have been in the medical field for 28 years and record keeping is the most important aspect to patient safety in this department. Have seen many legal cases and all is in order. CG is the catalyst to the tragic story that was written for Adnan and Hae.
navymom

So, does that mean potentially a file saying that somebody from Ms. Guttirez office contacted Ms. McClain could possibly be in somebody else's file. This is a nightmare.

Serial's website has images of Asia's letters in its "Maps, Documents, Etc." section. If they didn't come from the defense's files then do we know where they are today?

Did Adnan waive attorney-client privilege in order to grant the Undisclosed team access to his defense team's files? While I don't think anyone expects the Undisclosed team to be granted access to all of Gutierrez's case files it would be interesting to see what an internal search of Gutierrez's firm's files would turn up. Perhaps the search could be narrowed by case timeframes and possibly even to the ones that Gutierrez herself worked on rather than just looking through every piece of paper in their archives.

Silverlock: The letters were attached to Adnan's PCR petition.

S+Jane: Asia herself said that no one ever contacted her, either prosecution or defense, prior to writing her first affadavit. What motive would she have to be lying about this?

I am not saying that she is lying, just that somebody may have tried to contact Asia and failed.

Adnan's case is somewhat unique in its popularity. If Adnan waived attorney-client privilege, could you open up the entire case file to the public domain? There are companies that will scan the documents and then OCR (optical character read) them into text form so they can be searched and indexed. It seems like an opportunity to allow the power of a crowd-sourced investigation to help find the truth. What is the downside, he is already serving a life term.

Another possible crowdsourcing route would be to contact (where possible) other CG former clients and ask if they (or a current attorney) will go thru their files and send any documents pertinent to Adnan's case to Adnan's current defense team.