Yesterday, I posted an entry about a number of unrelated documents from other cases being in the case file for Adnan Syed. As I noted in the comments section to my prior post, it also appears as if Cristina Gutierrez was having problems with possibly billing clients for work done for other clients. Again, it's tough to share the documentation because of issues involving attorney-client privilege, but I again have one (redacted) document that I feel comfortable sharing. 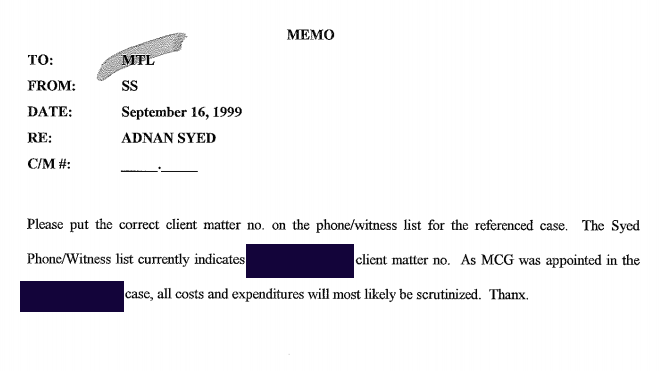 Now, of course, this document is not definitive. Indeed, the memo seems to indicate that one of Gutierrez's clerks caught the billing issue -- the other client was being billed for communications with witnesses in Adnan's cases -- and told another clerk to correct it. I'm also not sure whether the error was corrected or whether this other client was one of the dozens of clients who brought successful claims against Gutierrez under Maryland's Client Protection Fund.

The bit about scrutiny seems to imply the team were already aware of issues in expenses of CG's cases at this time, too.

Regarding the billing, what sort of records are there related to payments for Drew Davis' investigations?

Hey Colin, where are we at in Adnan's appeal process? I understand his appeal was granted and then pushed down to the circuit court, but what is the next step(s)? Oral arguments? If so, when are those slated to begin?

Seamus: There are good records of Davis’s work for Adnan’s initial attorneys in March. It looks like he met with Adnan and his attorneys on March 3rd and started contacting people (Coach Sye, Becky, Stephanie) about writing character letters on behalf of Adnan at his bail hearing. Then, there are not-so-good records of Davis contacting people at Gutierrez’s behest to pin down the details of January 13th. These records list the various people whom Davis is supposed to contact (e.g., Debbie, Aisha), but it’s not clear whether he ever contacted them. For instance, Krista is one of the people listed, but she has said that she was never contacted.

Jake: Adnan has 45 days from May 18th to file a motion to reopen so that Asia can testify and other relevant evidence can be introduced.

Interesting. Since Davis was working diligently from March 3, and Adnan testified in the PCR hearing that he received Asia’s letters 2-3 days after he was arrested, surely Davis would have contacted Asia if Adnan had shown his first attorneys the letters. Do you think, given this and the fact the letters were not in CG’s files, it’s safe to conclude Adnan never showed any of his attorneys the Asia letters?

Colin: Would it be the case that different strategies would be used by an attorney preparing for a bail hearing versus for an actual trial? As in, would the bail hearing simply be about convincing the judge Adnan (or whoever) won't skip bail (and therefore character witnesses are important - Asia would not be in this category as she didn't know him that well)? Whereas an alibi witness would be more relevant in an actual trial, for trying to invoke reasonable doubt. If so, would this mean the Asia letters would be less of a priority at the bail hearings?

Seamus: As best as I can tell, here’s the general timeline for things:

February 28th: Adnan is arrested. His initial attorneys are hired to work on bail issues.

March 3rd (morning): Adnan meets with his initial attorneys and Davis. Davis is then tasked with contacting people who can write character letters in support of Adnan for bail appeal. 600+ letters are secured.

April 18th: The case is handed off to Gutierrez, who continues working on the bail appeal.

June: Adnan is formally arraigned and his bail appeal is rejected.

July 11th: Gutierrez sends a letter to the prison asking for permission for her clerk to meet with Adnan.

July 13th: Gutierrez’s clerk meets with Adnan, and Adnan tells him about Asia.

The question marks are:

(1) When did Adnan receive Asia’s letters? Adnan testifies at the PCR hearing that he thinks he got them relatively soon after he was arrested, but he’s recalling events from 11 years ago. We know, at a minimum, that he had them by June when he wrote Krista, but I wouldn’t be surprised if he got them later than he remembered. I definitely don’t think he had them by the morning of March 3rd (I’m guessing that Asia couldn’t have sent the 3/1 letter on 3/1, given that she likely wrote it at night).

(2) When did Adnan tell Gutierrez about Asia? Obviously, we have the undated notes taken by Gutierrez that reference Asia. From context, I assume that these notes were taken before the July 13th clerk notes, but I’m not certain. I know you have questions about whether Adnan turned over Asia’s letters, but I see that as sort of a non-issue. Clearly, Adnan told Gutierrez and her clerk about Asia. I also think he turned over the letters. If he didn’t, however, that actually gives Gutierrez one less reason not to contact Asia.

(3) When did Gutierrez tell Adnan that Asia didn’t check out? I think I’m close to having a good answer on this question, but I need to confirm that Gutierrez didn’t meet with Adnan before the date I believe is correct.

Cupcake: Yes, the focus of Adnan’s initial attorneys and even Gutierrez until June/July was primarily on bail issues/character witnesses. Given that Asia didn’t know Adnan that well, she wouldn’t have done much as a character witness. It seems to me that July 1st was the day when the defense really started focusing on alibi witnesses based upon the State’s discovery request. That’s when the clerks tasked with alibi issues started meeting with Adnan, and that’s (July 13th) when Adnan tells Gutierrez’s clerk about Asia.

I must disagree with your assertion that Davis was only working on character references. The notes from Sye’s police interview make it clear that Davis’ primary focus was confirming Adnan’s track alibi. Per the police notes:

QUESTIONED ME ABOUT:
--RELATIONSHIP WITH ADNAN
--WANTED TO KNOW CONVERSATION WAS 13TH

So obviously Davis was working on Adnan’s alibi for January 13.

So you believe nobody tried to pin down Adnan's alibi at all until July? I can't believe that would be true. Surely memories would have faded to a large degree by then.

Did no one on the track team remember that he was there?

My understanding is that with the State's exceptionally late and incomplete disclosures, it wasn't clear what timeline the state was going to be arguing or when they even believe the murder happened until very, very close to the start of trial. Which would have made it very difficult for Gutierrez to focus on alibi rebuttal. Especially given the personal and professional... issues she was dealing with.

In the grand scheme of what was happening with CG at the time, this seems significant. However, can any attorneys attest to how often billing mistakes happen with private attorneys when there are a lot of clients?

Paul: From the defense files, it looks like the defense compiled a list of the track team members on October 16, 1999 and started contacting them. None of his teammates were called as witnesses, so I can only assume that none of them remembered whether he was specifically at practice on January 13th. Given that it was 9+ months later, this isn’t surprising to me.

Dragga: Yes, the State was very late and incomplete with its disclosures. From what it did disclose, it seems clear that the defense thought Hae was still at school at 3:00. I wonder what effect this might have had on its (non)investigation into Asia.

Janet: It’s a good question and probably a tough one to answer because such errors were likely more common in 1999 than 2015.

In one of Colin's comments on this post he mentions that there were over 600 character letters written in support of Adnan. I don't think of myself as particularly isolated and I'm not an active member of a congregation but I have serious doubts that I could come up with half that many people who know me well enough to be reliable character witnesses.

Could the sheer volume of letters written on Adnan's behalf actually become a detriment at his bail hearing instead of a benefit? That large a number of letters almost cries out 'Form letter!' to me and implies that any with meaningful content would be lost in the noise. Are those types of letters considered individually by the court?

I'm no lawyer, but if I were and my client were arrested for murder, and the victim clearly went missing during a very small time window (at most 2:15 to 3:30 pm), I would do everything possible to document an alibi for him during every minute of that window ASAP.

I believe the point contained in one of Colin’s above posts is that due to the State’s late and incomplete disclosures, the defense believed that the 2:15-3:00 period was NOT considered in the window in which Hae went missing. Until very, very close to the first trial beginning, the defense thought the investigation found that Hae was still at school at 3:00. So being able to provide witnesses for Adnan’s whereabouts in the 2:15-3:00 period would not have provided alibis.

Dragga,
Thanks for the reminder. The State's ridiculous lack of disclosure aside, Adnan himself knew there had to be a small window for Hae's disappearance. He saw her up until at least 2:15 at school, and then was later told by the police over the phone that she had failed to show up to pick up her cousin (which always took place around 3:15-3:30). IMO a competent defense council would attempt to establish an alibi for him for this entire window regardless of what the state said. She wouldn't necessarily have to use all of these alibi witnesses at trial, but she should at least have talked to them and recorded their recollections.