I've gotten a few e-mails about the comments section of my post from last Thursday. In one of the comments, I noted that

More specifically, it looks like they weren't contacted until after October 16, 1999.

There are several versions of this memorandum in the defense files: 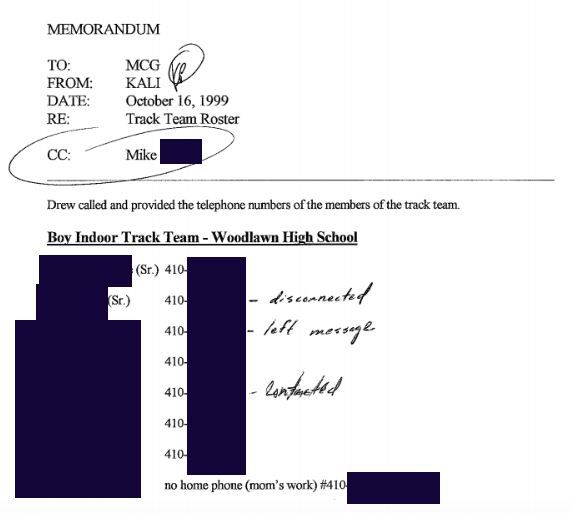 All of the versions of this memorandum make clear that the defense first got the list of members of the indoor track team on October 16, 1999. As this version makes clear, the defense then contacted or tried to contact the members of the team, presumably to see whether they recalled whether Adnan was at track practice on January 13, 1999. Given that 6+ months had already passed, it's unsurprising that none of these teammates seemingly had a specific recollection of January 13th.

What does seem surprising to me is that the defense waited until at least October 16th to contact these witnesses. As I noted in another comment, the defense began looking into alibi witnesses in July 1999, presumably in response to a request for an alibi notice submitted by the prosecution on July 1st.

So, why did it take another 3.5 months for the defense to start contacting track teammates?

What is the latest on the case?

Adnan will likely file his motion to reopen by the end of this week. In that motion, he will lay out exactly what evidence he wants to present. The State will then have a chance to respond.

And what about the DNA testing? Is that still moving forward?

So Drew Davis was tasked with getting their phone numbers, but not with contacting them? Seems an odd use of a PI. Is it possible he'd already spoken to them and this was in follow up (to let CG and clerks determine if any would willingly testify at trial, for instance).

Are there any notes in the file about what the track team members who were contacted by CG or her clerks actually said?

Jane: There are some other versions of the memo that have handwritten notes with information from some of his teammates, but it's all pretty general; there's nothing specific about January 13th.

That is a crazy long time. At first when I realized that track practice is indoor from listening to the Crime Writers podcast (I should have known this, but I think track = outside) I thought that could be helpful--you think in a smaller enclosed space, as opposed to a whole field, people would remember others being missing/having conversations more easily. But not all those months later. Thanks for the update! (@MysticalSusan)

Susan - presumably the practice on January 13th was outside since the weather was nice. This is based on the recollection of the track coach, who (at trial) couldn't say for sure that Adnan was at track practice on the 13th, recalled speaking to Adnan when they held practice outside on an unusually warm day. After some sleuthing by Colin and Susan Simpson, they agree that the only day that fits with Coach Sye's recollection was January 13th.

Silverlock: They're definitely not form letters. Each of the letters is very different, and they come from people from all walks of life.

Colin, I realise you may not be able to comment specifically on Adnan's case (though please do if you can!), but are you able to provide some hypothetical examples of why evidence/info couldn't be raised during a pending appeal? I'm not really understanding why a pending appeal would mean a parallel motion couldn't be commenced. Is this for legal reasons/strategy reasons/some other reason?

Cupcake: We’ve talked about how a lot of witness statements were “lost” and never disclosed to the defense in this case. Imagine that the defense team talks to one of these witnesses and learns that (s)he said something to the cops that tended to exonerate Adnan. Because Adnan has his currently pending PCR petition, Adnan could not include a Brady claim on this point if he were to currently file a petition for DNA testing. So, if Adnan filed a DNA petition now, he could only make a Brady claim after his current petition and DNA petition don’t lead to a new trial. The court would be unlikely to consider that claim at that point.

But, Collin- according to Susan Simpson, and the police interview with the coach dated March 23rd, he clearly states that the defenses investigator had already been there asking questions about Adnan being at practice. https://viewfromll2.files.wordpress.com/2015/03/coach-sye-statement-notes-3-23-99.pdf

Thanks for answering. Just to clarify, is it the case that for most types of appeal, only one appeal can be in motion at any one time, and it’s difficult to add issues to the appeal once it’s started – but a motion for DNA testing is a special case of appeal and could run in tandem to an existing appeal (is this because it’s potentially exculpatory evidence?), and a DNA petition can have additional new info tacked onto it (but in this case hypothetical new information needs gathering and so warrants a delay in filing)? The only thing that seems strange to me coming from a non-legal perspective is how 1+1 seems to equal 3, and not 2 (‘DNA plus added new info’ is stronger than ‘DNA’ and ‘added new info’ one after the other). And also that ‘added new info’ alone might not warrant being heard, yet it would potentially change the outcome of the appeal if considered alongside the DNA evidence… Is it something to do with the court potentially finding a greater likelihood that there would have been a different outcome at trial when both issues are considered simultaneously? Thanks.

Any idea how long the state will take to respond to his motion to reopen? If it is reopened, what is the next step?

Any idea how long the state will take to respond to his motion to reopen? If it is reopened, what is the next step?

Are we absolutely sure we can't get the incoming att calls from
1999 seems that would be saved somewhere ?

Is it possible to find out who Mr. A is?

I assume you have the real name of Mr. S. Could there be a connection between Roy Davis and Mr. S?

Do Hae's bank records ever show a transaction near the area Roy Davis lived before? Perhaps she stopped because she needed money for whatever the other thing that came up was that she needed to do?

Is this just their lame attempt to show they had crossed their T's and dotted their I's at trial? Wonder how many other "notes" or "attempts" at things happened in this timeframe, 6 months later.

Cupcake: You have it right. The only “new” thing that can be brought now is a petition for DNA testing. If the current appeal fails, however, other “new” claims could be included in the DNA petition. Those other claims would make the DNA claim stronger and vice versa.

Traci: The order doesn’t state how long the State has to respond. I would guess either 30 or 45 days. If it’s reopened, a date will be set for Asia to testify and other evidence to be admitted (assuming the court allows the latter).

David: Hopefully, we’ll have something from him in the future.

GC: There might be a connection, but I’m not aware of it. Hae deposited her paycheck at the ATM right across from where Roy Davis lived a few times.

bourhens: Maybe. I wish I knew more about what the defense was doing.

So if it's agreed that track practice was held outdoors on Jan 13, 1999, then there are a few things that come to mind. Sunset on 1/13/99 was at 5:04pm. Whether practice started at 3pm or 4pm, it had to have ended by sunset unless the field had lights. I have high school kids who play sports and it is very expensive to operate those lights. I would imagine the school would not want to turn on the lights for a practice session especially when an indoor track was available. Football season was over by then so it's not as if the field and lights would have been in use for another purpose. Practice had to have been, at the very least, 1.5 hours long with the likelihood of 2 hours.

Hi Colin,
The ATM information is so interesting to me. I’ve been harboring the thought she stopped somewhere along the route to the Day Care for some time now, maybe to get a quick manicure or eyebrow wax or something related to seeing Don later (looking pretty for him). But a deposit would make sense since she had the check for awhile and only had, if I recall, about $8 in her account, not enough to even make a withdrawal.
On Susan’s blog a while ago, someone mentioned a comment that has stuck with me, the fact that whoever did murder Hae might have been tracking her whereabouts and such, or at least lived/worked or went to school in the area, since the time window was small and the probable location from where she disappeared was between the high school and day care.
Also, regarding Roy Davis—was he unemployed at the time of Hae’s murder? (If so, he might have had some free time on his hands). Seems like Have picked up her cousin pretty regulary—does anyone know if she picked up the cousin daily, weekly, etc? If daily, she would have been on that stretch of road often, perhaps stopping for gas, etc., and someone (like Roy) may have noticed her before, even tracked her. Where did Roy live in relation to the ATM—was it directly across the street? Was the parking lot visible from his home? I think whoever the killer was, even if a Woodlawn student, the killer had noticed Have before, and killer chose this day because of a certain combination of coincidences came aligned—meaning, he saw an opportunity to strike her undetected and took the opportunity. Too bad the ATM was not looked into at the time, as there may have been video footage.