The Prosecution Claiming That Hae Was Killed by 2:36 P.M. is a Legally Operative Fact

Second, I have been getting a few e-mails from people questioning whether the prosecution claimed in its closing argument at the trial of Adnan Syed that Hae Min Lee had been killed between 2:15 and 2:36 P.M. on January 13, 1999. Given that this claim was a huge part of the Serial Podcast and Adnan's current argument that he received the ineffective assistance of counsel based on failure to contact Asia McClain, I thought it made sense to do a quick post proving that the prosecution did, in fact, make this claim. 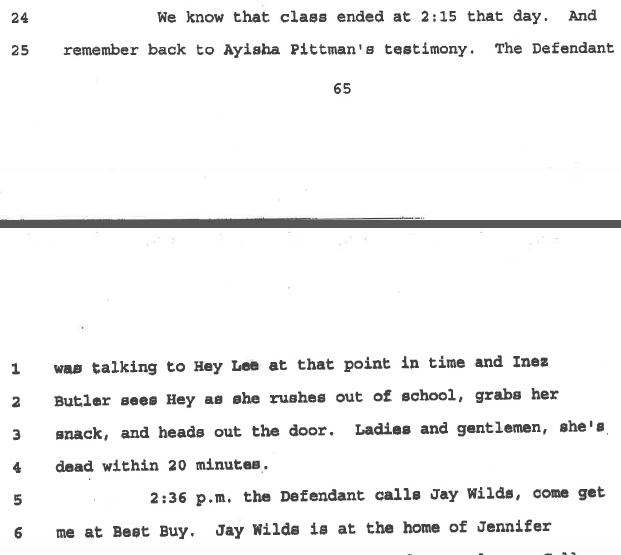 I don't really see how there's any ambiguity there, but you don't have to take my word for it. Here is the relevant portion of the "Statement of the Case" by the Postconviction Review Court in its opinion denying Adnan relief (page 3):

In other words, the common belief that the prosecution claimed that Hae was killed by 2:36 P.M. is not just a belief; it is a legally operative fact in Adnan's appeal.*

*Other people have noted that closing arguments are not evidence. This is true, but the evidence presented at Adnan's trial was that both a witness for the prosecution (Inez Butler) and a witness for the defense (Becky) claimed that they saw Hae leaving school in a hurry between 2:15 and 2:20 P.M. Therefore, if Asia left Adnan in the library at 2:40 P.M., her testimony at trial would have been huge given both the evidence -- Hae likely left school well before 2:40 -- and argument -- Hae was killed at Best Buy by 2:36 -- presented at trial.

Listed below are links to weblogs that reference The Prosecution Claiming That Hae Was Killed by 2:36 P.M. is a Legally Operative Fact:

The defense PI or PIs seem to have done a thorough job here. They reached out to Coach Sye, Neighbor Boy, LensCrafters, and Jay's manager. Given that, I find it very hard to believe they didn't contact Asia. This could possibly be cleared up by examining the PI's notes, which we know Rabia has in her possession. Have you seen them?

Seamus: I now have everything that Rabia has, and there's nothing in there about Asia being contacted. There's also nothing about "Takera," "Ann," or another possibly critical witness being contacted.

Here's the problem with this. We don't know what the jury thought OTHER THAN they all believed Adnan killed her. They might have gone into deliberations and immediately thrown out the prosecutor's statements. Heck, they themselves might not have come to any consensus about when Adnan killed her, all we know is they all agreed that he did kill her.

So you can't come back now and say Adnan deserves relief because of this one statement in the prosecutor's argument when we have no idea (and it is quite irrelevant) whether the jury agreed with her or not.

monstimal: If that were the case, a defendant could never win an ineffective assistance of counsel claim because we never know exactly what the jury was thinking. A court must always engage in guess work. In an alibi case, this guess work is fairly straightforward: If the State claims that victim was dead by a certain time, and the evidence fairly supports this theory (testimony by Inez and Becky), an uncontacted alibi witness who saw the defendant at a time and place inconsistent with that theory=prejudice. Assuming Asia is found to be relatively reliable, that should be enough.

Will this factor into the eagerly anticipated state's response to Asia's most recent affidavit? What happens if the state wants to or tries to change this timeline in the response? Is that possible?

In the IAC claim, how important is it to test the substance and reliability of what Asia might have said then or says now? Isn't that she was a known potential alibi witness who was not contacted meaningful enough by itself? That would be similar to the IAC claim based on not seeking a plea bargain. The fact that one was not sought by counsel, despite her client's asking, seems to be the issue.

The title of this blog post promises more than it can, and more than it ultimately does, deliver, as demonstrated by the asterisk comment you added at the tail end. There is no requirement that the evidence fit a single theory, nor is there a requirement that the prosecution limit itself to a single theory. All you have is non-evidentiary argument made in closing, and a non-evidentiary comment from an appellate court trying to understand. The law is that the jury may have convicted Adnan and rejected the State’s timeline, after its review all the other evidence. So, it is simply incorrect as a matter of law to say that for Adnan to have been properly convicted, the jury must have agreed with the argument that the murder concluded by 2:36 p.m., January 13, 1999.

BookNerd: The State can’t change this timeline. That’s what I mean by saying that the timeline is a legally operative fact. If and when Asia is allowed to testify, the question will be what effect her testimony would have had on the jury based on the timeline presented to the jury at trial: death between 2:15 and 2:36. This is why Asia saying she saw Adnan until 2:40 is so valuable.

streetwriter: There’s two parts to an IAC claim: (1) deficient performance; and (2) prejudice. Even if defense counsel erred in failing to contact Asia, there would be no prejudice if Asia turns out to be a terrible witness. In other words, if Asia testifies at a re-opened PCR hearing and is torn apart on cross-examination, Adnan wouldn’t be able to prove that his attorney’s failure to contact her prejudiced him. But, if Asia turns out to be a credible witness, then there was prejudice based on failure to contact her.

NewInfo: The title of this post promises one thing: that the State arguing that Hae was dead by 2:36 is a legally operative fact. And that is true because that is what the PCR court found. You are correct that the jury could have rejected this timeline and still found Adnan guilty. But what is also correct is that credible testimony by Asia that she saw Adnan at the library until 2:40 would prove ineffective assistance based upon this timeline.

Right, you cannot win an IAC claim by providing evidence that something the jury MIGHT have thought is not true. You have to provide some evidence against what you KNOW the jury was thinking. Like if you completely accounted for Adnan from 2:15 till 8:00 or something like that (and you actually produce the person who gives that alibi...but that's a separate issue).

The answer is right there in your response..."a defendant could never win an ineffective assistance of counsel claim". Definitely not if they were all Asia caliber claims.

monstimal: The burden of proof isn't nearly that high. Take a look at In re Parris W.:

which is THE Maryland case on IAC based on failure to contact an alibi witness. In that case, "the State never established the time at which the assault on Morton occurred, although the parties seem to have assumed that it occurred at 3:45 p.m." The key alibi witness who wasn't properly called to testify at trial was Ms. Cary. According to the Court of Appeals of Maryland, "[i]f Ms. Cary had been present to testify that she had observed Appellant forty minutes away from the scene of the crime at 4:30 p.m., her testimony may have discredited Morton's identification of Appellant as his assailant."

That's actually a much weaker case than the case that Adnan could make if Asia testifies that she saw him in the library up until 2:40 P.M.

I don't see these two cases as analogous. Difference one: His lawyer wanted to call these 4 witnesses but accidentally subpoenaed them for the wrong day. This removes the most apt difference with the Asia situation. There's no question the defense wanted these witnesses.

Difference two: the defendant's alibi was for the entire day. The other witnesses were to corroborate that alibi because it was his father. There is not question here that someone was saying the defendant could not have done the crime, the question was only whether one believes that alibi witness.

Difference three: it's not clear what the time window of this crime was but it sounds like Ms Cary's testimony would cover it due to travel times. If Asia were to say she saw Adnan 45 minutes away from Woodlawn at 3 pm, I agree you would have something then, but she's not.

Difference two: This kind of cuts both ways. The defendant’s claim was that Ms. Cary could corroborate some of his father’s alibi testimony. Obviously, it was important for him to have corroboration. Adnan’s claim was that Asia would be his alibi. Obviously, it was important for Adnan to have an alibi. Which is worse: failing to corroborate an alibi or failing to present any alibi? I personally think Adnan has a stronger case.

Difference three. Ms. Carey saw the defendant at 3:45 at a location 40 minutes away from the crime scene. The crime allegedly occurred at 4:30, which is 45 minutes after Ms. Carey saw him. Asia says she saw Adnan at the library until 2:40, and the prosecution claimed that Hae left school between 2:15 and 2:20 (or soon thereafter) and had been killed at the Best Buy a mile away from the school library by 2:36. Again, I personally think Adnan has a stronger case.

Well again, there's no debate that this kid has an alibi. There is no question, you cannot believe the alibi and believe in guilt. The IAC comes from an obvious mistake that led to the alibi not being corroborated.

For Adnan/Asia, that is not true. It cannot be said with certainty that the jury could not believe both Asia's story (if they heard it in the same context we do) and Adnan's guilt. It's a very weak IAC in comparison to the one you posted.

What makes "dead by 2:36" the legally operative claim? Is it the witness testimony or the theory presented in closing arguments? Thanks

From the PCR court's statement of the case, it looks like the combination of Inez Butler's testimony and the prosecution's statement during closing argument.

Maybe I don't understand "legally operative fact". If there were a retrial (longshot, I understand) are you saying that the state MUST continue to stand by that claim? Even if new testimony about the Asia alibi were introduced? They can't just ague that he killed her between 2:40 and 3:15 (which is what most people who think he's guilty seem to believe).

Your response to me states literally that “the state arguing” something is itself the “legally operative fact.” Is that what you meant to say? (Trying to understand.)

Sophie: It’s only legally operative for the current appeal. If there’s a retrial, the State would be free to argue a new timeline.

Newinfo: Exactly. In other words, assume that the Court of Special Appeals remands to the Circuit Court so that Asia can testify. Asia then testifies that she remembers seeing Adnan on 1/13 until 2:40 P.M. The State couldn’t then argue, “Well, that’s irrelevant because we never specifically claimed that Hae was killed before 2:40 P.M.” The court has already concluded that the State did make this argument at trial.

Hi Colin,
Why wouldn't the defense get the evidence that was never tested (eg Hae's nail clippings) tested straight away? Why would you hold off, isn't that just wasting valuable time in case the latest appeal goes nowhere?
Could the prosecution seek to have this evidence tested now? If so why wouldn't they?