On the last two days, I've posted entries about (1) the judge at Adnan Syed's trial being disturbed by the "accusations that Ms. Gutierrez [Adnan's attorney] wouldn't talk to people;" and (2) the accusation that Gutierrez wouldn't talk to five witnesses subpoenaed by both the prosecution and defense. After digging through the defense files, I feel pretty certain that I've found one of these witnesses, and the correspondence about her gives some useful context to the allegations against Gutierrez.

Hae Min Lee served as a teacher's aide for Hope Schab, who also served as a bit of an emissary between the police and the students at Woodlawn High School. She was initially interviewed by the police on February 1, 1999 and was later called as a prosecution witness at Adnan's first and second trials. In addition to being subpoenaed by the prosecution, she was also subpoenaed by the defense. Here is a defense memo about Ms. Schab's subsequent attempt to get in contact with Gutierrez: 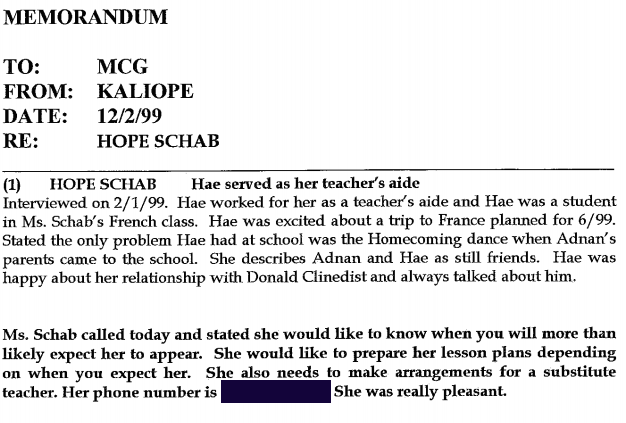 So, here we have a witness who is described to Gutierrez as "really pleasant," supporting the proposition that Adnan and Hae were still friends, and simply wanting to know more information so that she can make teaching arrangements. As a simple matter of human and civic decency, you would expect that Gutierrez would want to have the relevant information* provided to this person; as someone who was going to interrogate this seemingly neutral witness, Gutierrez also wouldn't have wanted to make Ms. Schab angry at her and her client.

And yet, it seems clear that no one on Gutierrez's team ever gave this information to Ms. Schab. Moreover, it seems clear that nobody on Gutierrez's team had talked with Ms. Schab about what she knew as late as a week before Adnan's first trial, which commenced on December 9, 1999. Instead, the only information that the defense team seems to have consists of the statements contained in Ms. Schab's police interview.

I've had some readers shocked at the allegation that Gutierrez refused to talk to five witnesses while other readers have speculated that the failure to talk to them could have been a trial tactic used against witnesses clearly hostile to Adnan's cause. At least in the case of Ms. Schab, Gutierrez's failure seems to be an error of omission rather than an error of commission.

*This likely would have consisted of a two minute phone call explaining that the defense would only be calling her if the prosecution didn't call her. Of course, given that the defense clearly wanted her to testify, there might have been a longer conversation going over what Ms. Schab knew. Instead, it seems as if the defense relied upon the State's investigation.

I don't see how refusing to talk to witnesses is a "trial tactic." Keeping oneself deliberately ignorant isn't a tactic. It's just a blunder.

bacchys: Agreed, especially under the circumstances of this case.

Schab's testimony was horrendous for Adnan, indicating that he was more concerned about his parents find out the truth about him than he was about finding out what happened to Hae. Why didn't you mention that?

Seamus: Yes, that's how she testified at trial, but, at the time of this memo, all that Gutierrez apparently knew about Ms. Schab came from her 2/1/99 police interview and her pleasant call with Gutierrez's law clerk. Indeed, this explains why the defense subpoenaed her.

The fact that Ms. Schab later testified in a manner that might have hurt Adnan makes it worse that Gutierrez didn't contact her to prepare.

Honestly, to me this looks like confirmation bias on your part. From all accounts Ms. Gutierrez did pretty well for Mr. Syed in the first trial. I have also seen suggestions that she might have been winning that first trial also. I understand you think Mr. Syed should not be in prison, but this particular incident seems of little consequence and you are at best second guessing the circumstances/decisions of the attorney. Should she not be given the same benefit of doubt that is being given to Mr. Syed.

RC: Gutierrez agreed to be disbarred in the face of a record number of client complaints a year after representing Adnan. Some of these complaints involved allegations that Gutierrez lied to clients and did a poor job in communications. In particular, Gutierrez was seemingly making the mistakes in the Witman case that precipitated her disbarment at pretty much the exact point in time that she was handling Adnan's case.

How do we specifically know that Ms. Schab was never called back?

Further, it seems the above memo was prepared on 12/2/99 in preparation for the 1ST trial. Were there allegations during the 1ST trial that CG failed to contact Ms. Schab or other witnesses?

Nine9fifty50: Gutierrez subpoenaed the same prosecution witnesses at both trials, and there were a limited number of prosecution witnesses whom she subpoenaed. I suppose it's possible that Gutierrez returned (or had someone on her team return) Ms. Schab's call but failed to return the calls of 5 other witnesses. I also suppose it's possible that Urick was lying. But, by far the likeliest outcome given the memo was that Ms. Schab was not contacted by the defense team.

Nine9fifty50: Urick doesn't specify a trial. He just notes that five civilian witnesses subpoenaed by Gutierrez had their phone calls go unreturned. This could have been in connection with the 1st trial, the 2nd trial, or both trials. What we do know is that Ms. Schab called about her subpoena. Again, it's possible that someone on the defense team called her back but that five other witnesses who made similar calls didn't have their call returns. I just think it's unlikely.

RC - I think you're making Colin's point for him rather than refuting it. CG does appear to have been winning at the first trial DESPITE many clear and documented instances of misconduct and IAC. This only could have been possible if the state's case was very shaky, which we now know (after Colin's hard work, among others) it was.

If her call was returned by the law clerk, wouldn't there have been an addendum to this memo. I can't believe CG would have instructed a law clerk to return the call without instructing the clerk to at least discuss the reason she was subpoenaed and what they understood her testimony to be. Not to speak ill of the dead but CG was showing signs of distress before the first trial by her preparation for trial and by the time of the second trial she was not competent.

Colin, Two things....1. Why no Undisclosed podcast today (June 1). 2. Why was CG called lier in the first trial that lead to the mistrial? I can not find anything on it and don't remember hearing what happened. Thank you for doing such a wonderful job on this case.

Laura: The episode will be posted later today. The judge called Gutierrez a liar at the first trial because she claimed that the prosecution hadn't turned over evidence in connection with its cell tower expert.