The Autopsy Posts: The Fluids Found In & Around Hae Min Lee's Nose/Mouth Were Not Blood

A few weeks ago, I did a post about pulmonary edema and sputum. As I noted,

Pulmonary edema is a condition caused by excess fluid in the lungs. This fluid collects in the numerous air sacs in the lungs, making it difficult to breathe....

If a person has a severe pulmonary edema, she might have a pink frothy sputum, i.e., mucous material from the lungs. In rare cases, this sputum will come out of the person's mouth and/or nose, with the sputum appearing pink based on the combination of blood, mucus, and other watery fluids.

I wrote this post based on the prosecution of Adnan Syed for murdering his ex-girlfriend, Hae Min Lee. The prosecution's theory of the case was that Adnan strangled Hae in her Sentra, resulting in a pulmonary edema and sputum coming out of of Hae's nose and mouth while she was still in the passenger compartment of her Sentra. According to the prosecution, Adnan then wiped the sputum that had come out of Hae's nose and mouth, which explained a stained t-shirt that was crumpled up next to the driver's seat in the Sentra. This t-shirt was one of only two pieces of physical evidence tending to establish that Hae was strangled in her Sentra, with the other being a "broken" windshield wiper or turn signal lever.

Given how important this edema/sputum/t-shirt theory was for establishing that Hae was killed in her car, you would expect that fluids found in around Hae's mouth and nose would have been tested by the State. And they (apparently) were. From the list of "Photo Exhibits of State":

So, according to Dr. Korell, the Assistant Medical Examiner who performed the autopsy on Hae, the fluids in and around Hae's nose/mouth area tested negative for the presence of blood. What does this tell us? Let's start with my prior post, in which the experts I consulted told me the following:

1. They had never seen a pulmonary edema resulting from strangulation, and such a result was exceedingly unlikely.

2. Even in cases of pulmonary edema, sputum coming out of the nose and mouth is pretty rare.

3. Even if strangulation somehow caused a pulmonary edema and sputum, the sputum would not come out of the victim's nose and/or mouth until hours later.

Well, that was pretty simple. So, what were the fluids? It looks like the guess on the exhibit list was probably correct. According to my medical examiner, "[T]he fluid around her nose and mouth was decomp.  If she was in the dirt face down it could have mixed with the fluids and given the appearance of dark reddish something."

[Update: Forensic anthropologist William Rodriguez also gave testimony (page 27) at Adnan's trial that the fluids in and around Hae's nose and mouth appeared to be decomp: 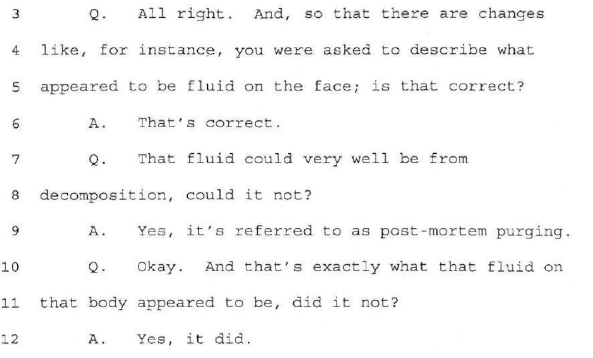 Listed below are links to weblogs that reference The Autopsy Posts: The Fluids Found In & Around Hae Min Lee's Nose/Mouth Were Not Blood:

I believe during cross (1999 or 2000?) this matter was discussed. To the best of my recollection it was Dr. Rodriguez (Army Forensic pathologist) who testified that the fluids around the victims nose and mouth were part of the decomposition process. I believe he used the term the body "purging" post mortem.

I can find the reference if required.

Sorry, to be clear, Rodriguez was speaking about the fluids around the victim's nose and mouth, not the stains on the T-shirt.

Rodriquez was a forensic anthropologist not a pathologist...just for clarity.