Yesterday, I posted an entry which included relevant portions of Becky's police statement and testimony from the trial of Adnan Syed for murdering Hae Min Lee. As I noted in that post, if you believe some combination of Becky's statement and testimony, you believe that, at about 2:20 P.M. on January 13, 1999, when Becky was walking toward the guidance counselor's office, (1) Adnan and Lee were walking in opposite directions when Lee told Adnan that she couldn't give him a ride because she had "something else to do"/"somewhere" she had to go; and (2) Lee then proceeded to the door that led to where her car was parked.* So, could this explanation of events be consistent with Lee proceeding to her Sentra and Adnan proceeding to the library, where he might have run into Asia McClain? Here is a map of the Woodlawn campus drawn by Krista, a friend of both Adnan and Lee (Krista's Disclaimer: This is a rough sketch not drawn to scale. Also, the top of the sketch is south while the bottom of the sketch is north): 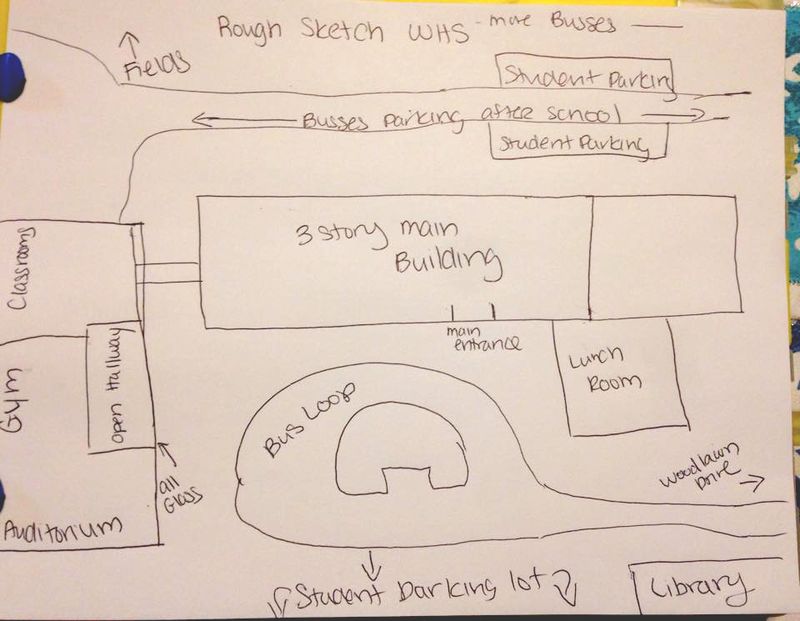 You can compare this sketch to the real deal by clicking on this Google Maps link (keeping in mind that you'd have to rotate it 180 degrees to get the two to match).

Here is Krista's relevant commentary on her sketch:

"Counselors office was in the first floor of main building. Snack booth is outside of the gym in the open hallway facing bus loop. Students had to park in back lot and only got to park in front loop if back loop was full. Front was also for teacher parking. Locker rooms were under the gym on either side (had to go down steps). There were sidewalks on the outside of the bus loop [so] you didn't need to go out to the road to get to the library."

Moreover, according to Krista, (1) Lee usually parked in the small lot in the back; and (2) if Lee was going to pull around to the front to get a snack, it wouldn't make sense for her to hurry to her car to get it out before the buses blocked her because she would've had to wait for the front bus loop to clear anyway before she could get her car in there.

Let's now look back at Becky's statement/testimony: Lee was heading toward the door that led to where her car was parked while Adnan was walking in the opposite direction. Now, look at Krista's map. This would suggest that Lee was walking to a door on the upper (south) right of the main building while Adnan was walking down (north) in the same hallway. As you can see, this path could have led him directly to the library, and students didn't "need to go out to the road to get to the library."

Moreover, Becky's story makes sense because, unlike in the experiment done in Episode 5 of Serial, Lee didn't race out to her car at 2:15 only to get stuck behind the bus loop; instead, it was already 2:20ish when she went to the door that led to her Sentra.

This takes us to Inez Butler-Hendricks. Before, I never understood how she could claim that she saw Lee keeping her car running with the keys in the car when she visited the concession stand on January 13, 1999. Now, after reading Krista's commentary, I get it: The snack booth was outside of the gym in the open hallway facing the bus loop. Therefore, if Inez Butler-Hendricks did see Lee on January 13, 1999, she and anyone else at the stand likely had a good look at the Sentra both as Lee left it and returned to it. Now, I think there's a good chance that Inez was remembering the wrong day, but she also testified that Lee visited the stand on a regular basis.

If Becky is correct about Adnan and Lee walking in opposite directions, Adnan could have been proceeding to the library...or he could have been proceeding to the bus loop so that he could intercept Lee before she left school. But, if we believe Becky's statement/testimony, Lee was likely in the bus loop pretty soon after the busses left, meaning that her Sentra was likely visible by people milling about soon after school and using the bus loop to leave school. If Lee stopped at the concession stand, her Sentra was also visible to the people at the concession stand.

*Of course, Becky's statement and testimony aren't entirely consistent, so you might believe one over the other or think that both came close to the truth without entirely capturing it. I generally put more stock in first statements, and Becky's first statement was that Lee told Adnan she couldn't give him a ride because she had "something else to do" as they walked in opposite directions.

Listed below are links to weblogs that reference Krista's Sketch of the Woodlawn Campus & Commentary About Various Locations On It:

Have you reviewed Debbie Warren's direct testimony? Do you have a link? The link provided was only for the cross and redirect on Feb 17 and at page 69 she confirms see Hae: "Q: And you recall that you told him [Det. O'Shea] like you told us yesterday that you saw Hae at about three o'clock? A: Yes."). Your prior post states "Debbie didn't stand by her statements" during the 2nd trial.

Page 108 of the February 17th transcript is a good example of her nt standing by he prior statement(s).

So does this mean that if we are to believe Ms Butler's account that Hae walked out to the South car park to her car, waited for the busses to clear, pulled out onto Woodlawn Dr. pulled back into the school main entrance past the library, parked up, presumably, in one of the bays in the middle of the bus loop, ran over to the concession stand, chatted to Inez, ran back to her car, drove back out past the library at which point she "could" have been intercepted by Adnan, all of which happened whilst she was in a hurry to be "somewhere else" to do "something"?

Or she walked to her car in the South Car Park waited for the busses to clear pulled out onto Woodlawn Dr. and drove off to "somewhere" to do "something" without seeing Adnan at all.

I'm right in think there is no road link inside the school perimeter between the North and South car parks?

Professor, I noticed that you refer to everyone by their first names except for Hae. Is there a reason for that that may not be obvious to a lay reader?

Can you provide the context for the map and quote:

"Counselors office was in the first floor of main building. Snack booth is outside of the gym in the open hallway facing bus loop. Students had to park in back lot and only got to park in front loop if back loop was full. Front was also for teacher parking. Locker rooms were under the gym on either side (had to go down steps). There were sidewalks on the outside of the bus loop [so] you didn't need to go out to the road to get to the library."

Was this from court records, police interviews or other?

Are their source documents that you can link that would provide more info.

Specifically this:
Moreover, according to Krista, (1) Lee usually parked in the small lot in the back

Greg: Krista gave me all of the information for this post via e-mail. I took that information, created a draft post, sent it to her for edits, and then published the final product after she approved it.

OK Thanks. I see you cut and paste a portion of your correspondence. Did Krista give you permission to share everything in your final draft product, and if so, is it published somewhere on your blog? If not can we see what she has approved to be seen?

Thanks Colin. If you are still on e-mailing terms can you ask to clarify which parking lot Hae parked again. I know your post provides this but some question it.

Greg: She approved the final post. Krista herself said that Hae "usually parked in the small lot in the back." That comes directly from her.

Thanks Colin. Krista has also confirmed this herself now on twitter. Small back parking lot makes more sense for a number of reasons.