From the list of the list of Photo Exhibits of State in the trial of Adnan Syed for murdering Hae Min Lee: 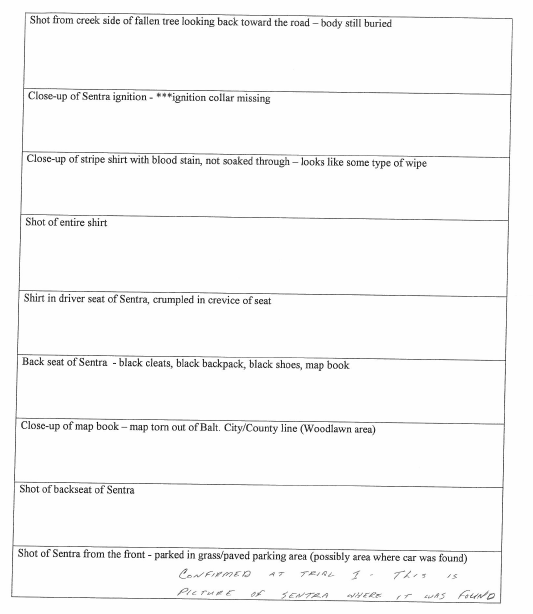 As you can see, the second photograph described on this page is a "Close-up of Sentra ignition - ***ignition collar missing." So, what is an ignition collar, and what significance could the fact that it was missing have with regard to the death of Hae Min Lee? 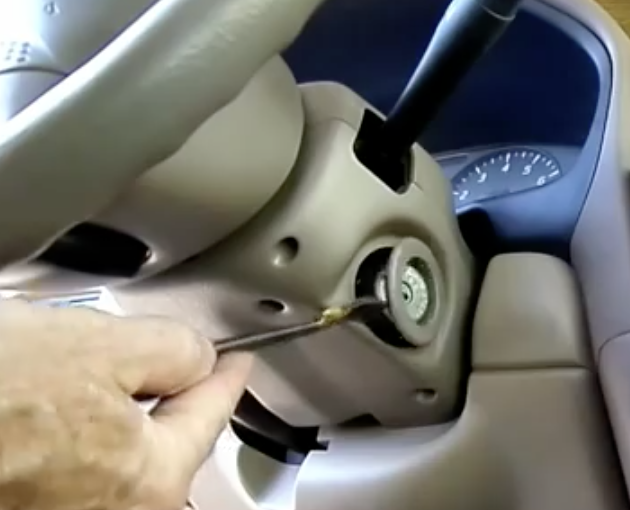 Why would someone remove the ignition collar? As you can see from the above video, one reason would be to repair/replace something in the steering column, such as the multifunction switch.

Traditionally, another reason was to get to the wiring so that the car could be hotwired/stolen. From the opinion of the Court of Appeals of Missouri in State v. Jordan, 699 S.W.2d 80, 82 (Mo.App. 1985):

The evidence was that when the Corvette was recovered shortly after its theft the police officers found gloves, screwdrivers, and a device known as a dent puller inside the car. Ms. Cooke testified these items were not hers and were not in the car the night of April 27, 1980, when she parked the car at her apartment. The police officers also found the ignition collar on the floorboard of the car, and the ignition in the steering column was missing. The prosecutor's argument was that the presence of these items demonstrated that the thief was a professional.

If Hae's Sentra were a 1994 Sentra, removing the ignition collar would have been a good first step toward hotwiring her car, which is why the 1994 Sentra was among the 10 most stolen cars in 2011, 2007, 2006, and 2005. In the mid-1990s, however, many car companies, including Nissan, introduced new locking mechanisms.* Now, removing the ignition collar would not be a good first step toward hotwiring a "modern" car, which generally can only be done by drilling the lockpins, using a screwdriver in the ignition, or somehow powering the dash through the hood (depending on the type of car).

Among the results of the investigation that weighed most heavily on State Farm's decision is the sophistication of the anti-theft devices that were present on the plaintiff's car. Specifically, her BMW contained EWS II, a system that worked independently of the mechanical ignition lock. In an EWS II system, a transponder in the key electronically transmits a variable code when the car is started. The ignition and fuel supply do not operate until receipt of the correct signal from the key.

Q. What did you find?

A. I found the ignition lock housing collar.

Q. And where did you find that?

A. On the surface of the floorboard.

Q. I'm assuming that that's not where that would normally be in a vehicle?

Q. Where is that usually located?

Q. What component did you look at first?

A. The ignition lock housing collar.

A. Marks from a screwdriver or a hammer, impact or pry marks.

Q. Are you looking for these marks with your naked eye?

Q. And that's also at your desk?

Q. So did you examine the ignition lock housing component under that microscope?

Q. Did you remove any portion of that component, separate it to examine it?

Q. Did you use any tools in your examination?

Q. And what did you find after you examined that component?

A. No evidence of damage from force.

In other words, removing the ignition collar is no longer a viable first step in hotwiring most modern cars, and, if a car thief tried to remove the collar without a tool like the one used in the above video, you would likely see evidence of damage from force.

So, what does the missing ignition collar in Hae Min Lee's 1998 Nissan Sentra tell us? I see several possibilities:

1. The ignition collar was missing prior to January 13, 1999, due to someone previously repairing or trying to repair something in the steering column.

2. Hae came upon someone unsuccessfully trying to hotwire her car.

3. Hae was killed outside her Sentra, and the murderer never had or lost her keys and subsequently tried in vain to hotwire the car.

4. Hae was killed inside her Sentra, the killer later disposed of or lost her keys, and then the murderer subsequently tried in vain to hotwire the car.

5. After Hae's Sentra was dumped behind the row houses off Edmondson Avenue, someone tried in vain to hotwire her car.

6. The photo was taken after someone working for the police or the body shop where the Sentra was stored removed the ignition collar to try to repair the possible issues that existed with the windshield wiper and/or turn signal levers.**

Previously, I have written about the question of whether there was actually a "broken" lever in Hae Min Lee's Sentra. That question was seemingly answered by Hae Min Lee's brother, who posted that he remembered the turn signal lever hanging/dangling when he picked up Hae's Sentra from the police.*** Is it possible that this damage to the lever resulted from someone trying to hotwire Hae's Sentra? Was the hole in the steering column observed by Detective Forrester the "hole" resulting from removal of the ignition collar? Does the missing ignition collar tell us anything about the guilt or innocence of Adnan Syed, anyone else connected to the case, or an unknown third party? Is there an alternate explanation for the missing ignition collar?

*I'm assuming that removing the ignition collar of a 1998 Sentra would not be a good first step toward hotwiring, but some expert confirmation would be nice.

**Obviously, this would present serious chain of custody issues.

***By the way, we now know that Hae's Sentra was released to her brother on March 7, 1999. From the Vehicle Processing Report:

Listed below are links to weblogs that reference The Possible Significance of the Missing Ignition Collar in Hae Min Lee's Nissan Sentra:

Is there a way to prevent the page from reloading every two minutes? Makes it hard to finish comments.

I have often wondered whether a carjacking or theft was involved. She had a new car ('98) and Jay seemed to change his story about whether he knew what her car looked like before the event in question.

It was total speculation but this evidence opens up an interesting line of inquiry. It seems like something Jay might have gotten involved in for monetary reasons and things may have gone awry and Hae was killed. Maybe Adnan was involved too.

2) The cell phone records show that Jay was near Woodlawn and Best Buy around the time she was estimated to have been killed and within twenty minutes was at the park and ride. Is this perhaps small support for the theory that Jay may have been involved in trying to steal her car and that something happened? He has consistently stated that he was at Jen s home until 340pm, which we can see by the cell towers that was not the case. So, as Susan Simpson pointed out, this was probably a time of significance for him and he wanted an alibi. So then the question becomes what was he really doing near Woodlawn and the Park and Ride?

3) Would require her to have been killed near Edmondson. This gives some support to Rabia s theory that she went to buy drugs. Jay certainly would know people in those circles.

5) Is there any information as to whether the car was locked at the time it was found? Was there damage to the door that could suggest someone broke in?

Ditto the request above about turning off the forced and frequent page refreshing. It freaks out my tablet especially if the wi-fi is not working too well. Might not be that helpful for people using mobile connections either.
But thank you EvidenceProf for these really interesting and illuminating blogs.

I wish I could prevent the page from reloading, but it's part of Typepad and beyond my control. The report on the car does not state whether it was locked or unlocked when found.

I would like to know more about this uncle. Is he the same one who is involved in the shady hiring of the "cultural consultants?" Could he have been the Asian voice of the anonymous call to police?

According to that diary entry, both Syed and her co-worker, Donald Clinedinst, inspected the Sentra at the mall parking lot and told her "not" (doubly underlined) "to drive it . . . unanimously. Arrgh!" (MPIA 15 459 1790).

It's unclear whether Hae heeded that unanimous advice. There is evidence that, nine days before that incident, she had personally signed a receipt for something at Security Nissan, the dealership where the car was purchased in late September 1998. (Page 7, Defense Team Evidence Review, available at https://www.adnansyedwiki.com/wp-content/uploads/2018/06/UdE05-Defense-Evidence-Review-Contents-of-Hae-Car-19991111.pdf)

If so, these would be opportunities during which the ignition collar could have been removed. It might also explain how the Sentra's wiper lever was dislodged without broken edges. Both of these observations could be explained by a technician seeking access to the steering column and skipping a step or two during the reassembly process.

I wish we knew more about the Sentra's repair and maintenance history.

On the flip side, a car that has been missing and unaccounted for a month in a part of the city where auto theft is common showing up with a missing igjniton collar—literally THE telltale sign that a car was manually hotwired, is what it appears to be. If it quacks like a duck and so on.... a duck.

Moreover, the only reason the cops didn’t make it clear what they know a missing ignition collar means in the police reports, is that it doesn’t fit into their narrative that the car was last parked by Adnan and Jay, who would have had the key, and obviously wouldn’t be needing to Hotwire it. This is the only reason the plain and obvious answer as to what a missing ignition collar means isn’t answered in the police report.