This is my second post about autopsies following my first post yesterday. As with my first post, this post will deal with how a medical examiner determines that a victim died as the result of strangulation. Once again I will be looking at the autopsy report for Hae Min Lee. In relevant part, it states:

Dissection of the neck revealed multiple focal hemorrhages on the superior (proximal) segments of the strap muscles involving the sternohyoid and the sternothyroid muscles....

A. Hemorrhage at the superior segment of the neck strap muscles.

So, how do these findings support a conclusion that the victim died as the result of strangulation?

Let's start with some terminology.

The infrahyoid muscles either originate from or insert on to the hyoid bone. 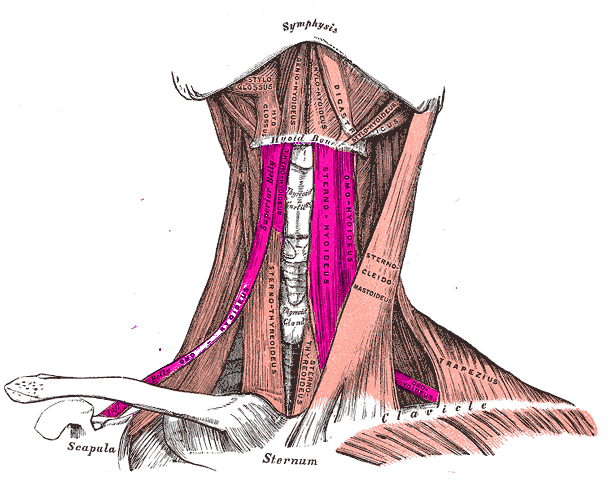 The infrahyoid muscles are colored in violet. 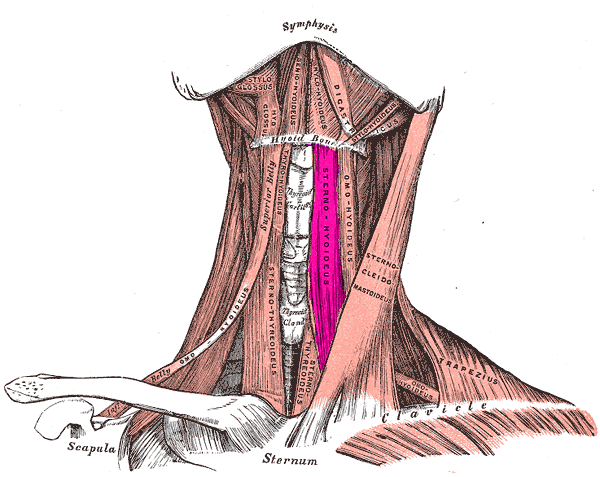 The sternohyoid muscle is colored in violet.

The Sternothyreoideus (or Sternothyroid muscle) is shorter and wider than the Sternohyoideus, beneath which it is situated. 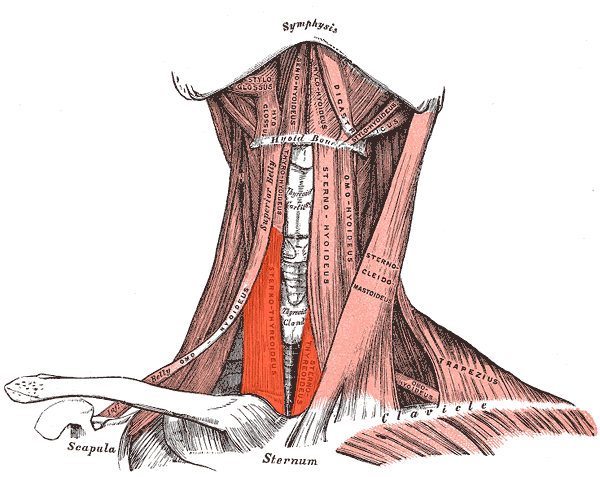 The sternothyroid muscle is colored in orange-red.

This takes us to why there is so often hemorrhaging in these strap muscles as the result of manual strangulation. They are both thin and in a location where the assailant's thumbs would naturally fall as he strangles the victim (especially the superior/upper proximal/center sections). The force exerted as the thumbs push down on these muscles and the fingers push back often cause the blood vessels in them to rupture, resulting in focal/discrete/distinct hemorrhaging. Here are some relevant excerpts:

From the Color Atlas of Forensic Medicine and Pathology:

With strangulation, "[t]here are usually hemorrhages in the strap muscles of the neck, and there may be fractures of the laryngeal cartilages and/or hyoid bone."

Okoye, a forensic pathologist and the Lancaster County coroner's physician, testified to having performed more than 10,000 autopsies....He...found hemorrhaging in the neck strap muscles that was not caused by decomposition. Okoye also concluded that Hall died as a result of ligature strangulation.

Q. And would injury or hemorrhages to the strap muscle be indicative of manual strangulation?

The medical examiner further testified that there were some recent hemorrhages into the strap muscles of the neck, and that 'this type of hemorrhages are the result of Something or someone restraining this portion of the anatomy and an individual resisting this restraint.' * * * 'That something or someone had applied force to that portion of the anatomy.'...The medical examiner did express the opinion that the force applied to the strap muscles was similar to those seen in strangulation cases but testified the same bruises could be produced if someone was trying to save a person from drowning and grabbed the person's neck.

Dr. McDonough reported evidence of neck compression and injury to the victim's neck....As regards the neck injury, Dr. McDonough reported, "there were areas of hemorrhage in the muscles, what we call the strap muscles, which are thin muscles that look like straps. They go from the jaw down to the collarbone or from portions of the neck down to the collarbone. They support the neck structure. So both on the left and right side there were areas of hemorrhage in the neck...Hemorrhage of the neck are indicative that there's been enough force applied to the neck to break blood vessels and the most common would be some sort of strangulation."

Drs. Frisby and Ribe concluded Gallagher died from asphyxia due to manual strangulation. This conclusion was based on the presence of red bruising or bleeding on the right and left sternohyoidmuscles, a hemorrhage on the right-hand side of the lower part of the voice box and on the left side of the voice box, bruising to the thyroid gland, broken cartilage on the left side of the throat, and multiple hemorrhages inside Gallagher's tongue.

Q. To recapitulate, you said that you found the hemorrhages of the superior tips of the thyroid and left sternothyroid muscles to be consistent with strangulation and consistent with other things as well?

The coroner who first examined Mary at her home and later performed the autopsy also testified at trial....During the autopsy's internal examination, he noticed a flame hemorrhage in the sternohyoidmuscle over the thyroid, which indicated an applied injury to the neck, and another area of hemorrhage on the superior horn of Mary's thyroid cartilage, which could only be caused by pressure applied to the neck....The coroner concluded that Mary died from asphyxiation by strangulation.

Q:...Were there any other wounds to her neck, particularly internal wounds?

A: Yes, there were. In addition to the insize wound across the neck there was also bruising into the strap muscles which are the muscles that bind the skin that go up and connect your chest to your head so that you're able to move your head about in space.

In addition, there was a fracture of the hyoid bone on the left side of her neck. This is a horseshoe-shaped bone that sits right at the base of the tongue and it was fractured. And it's commonly seen in fractures that involve pressure on the neck.

Q: Would that be consistent with some form of strangulation?

Q: And what sort of force would be required by a hand to cause that injury to her, sir?

A: It takes a—in this instance it takes a force with use of the fingers opposed to the thumb grabbing in and squeezing very tightly.

The body was autopsied, the autopsy report was admitted into evidence, and Dr. Cyril Wecht, the forensic pathologist who performed the autopsy, testified at trial. Dr. Wecht's testimony and the autopsy report established that G.B. died of asphyxia due to manual strangulation, based on findings of abrasions and contusions to the neck area, focal hemorrhages of the muscles and soft tissues of the neck, and fractures of the thyroid cartilage and hyoid bone.

Defense counsel reviewed photographs and the victim's autopsy reports with a pathologist and was informed that: the victim did have a gash on the back of her head, but that it was not the cause of her death; the victim had petechiae hemorrhages in her eyes indicating strangulation; there was no water in the victim's lungs, indicating that she did not drown; there were focal hemorrhages on the victim's neck, or fingerprints left by someone applying pressure over time, and; the cause of death was asphyxiation (lack of oxygen). After this discussion with the pathologist, defense counsel advised the defendant that he did not believe the evidence would support an accident defense.

Dr. Vladimir Shvarts, who performed Velasquez's autopsy, found petechial hemorrhages in her left eye and focal hemorrhagic areas inside her neck and determined that the cause of death was strangulation.

Based on all of the above, you can see how the "multiple focal hemorrhages on the superior (proximal) segments of the strap muscles involving the sternohyoid and the sternothyroid muscles" played a part in the medical examiner determining that Lee died from strangulation.

Listed below are links to weblogs that reference The Autopsy Posts, Take 2: Focal Hemorrhaging of the Strap Muscles & Strangulation: