Fixed Lividity vs. a Mixed Pattern of Lividity & the Positioning of a Body After Death

Livor mortis, according to the Assistant State Medical Examiner, "is where there is a gravitational settling of the blood in the dependent portions of the body. In other words, if the body when it dies is lying on its back you will see the liver which is a sort of purple/reddish discoloration of the skin on the posterior portion." Hughes v. State, 437 A.2d 559, 565 n.4 (Del. 1981).

In this post, I will follow up on my post from yesterday on fixed lividity/livor mortis by discussing some additional cases and distinguishing "fixed lividity" from a "mixed" pattern of lividity.

In the Hughes case that led this post, a husband was charged with murdering his wife and claimed that he came upon her dead body lying in the driveway and "did not touch her but he placed a blanket over her body and called the police." At trial,

Experts aligned on the respective sides produced substantially conflicting testimony. State experts were of the opinion that the victim had died face down and was later rolled over. The most compelling of the reasons advanced in support of that theory appears to be that the positioning of the victim's left arm and hand indicated that some degree of rigor mortis had set in while the body lay in a face-down position. And, according to the experts, since rigor mortis generally begins between two and six hours after death, they opined that the victim's body, after death, had lain face down for at least two hours before being rolled over. On the other hand, defense experts said that the position of the left arm and hand was consistent with a theory that the victim had died on her back or, alternatively, that she was rolled over onto her back a very short time after death. Expert testimony regarding livor mortis was consistent with either theory because the Assistant State Medical Examiner testified that livor mortis had not begun on the anterior side of the victim's body but had started in the posterior side. According to the Assistant State Medical Examiner, livor mortis becomes fixed six to eight hours after death and so it appears that the body could not have lain face down for that period of time. (emphasis added).

Hughes's conviction was ultimately reversed because the Supreme Court of Delaware concluded the prosecution improperly characterized the expert evidence in the case as "essentially unrebutted."

Another case involving fixed lividity was State v. Lewis, 2013 WL 6199278 (Tenn.Crim.App. 2013), in which the victim was found "lying on her back...." At trial, Dr. Thomas Deering testified as an expert witness in the field of forensic pathology.

Dr. Deering testified about the presence of "fixed lividity" in the victim. Dr. Deering explained that when a person dies, the blood will pool to their back if they are lying on their back. If they are rolled over, the blood will pool onto their front. After six to ten hours, the blood becomes "fixed," so that "even if you roll them over, [the blood] will no longer obey gravity." He stated, "It's because the blood has begun to leak out of the vessels and it can't move through the vessels anymore, it's sludged and stopped." He said that this is one indication of how long a person has been dead and that he can "get some idea" of whether a body has been moved or not based on the lividity pattern.

Dr. Deering identified a photograph taken of the victim's back and referenced the picture as he explained lividity as it related to the victim. Referencing another photograph, Dr. Deering pointed out lividity, indicating that the victim was lying on her left side long enough for the blood to pool and stay fixed. He pointed out how the left leg was "purple" while the right leg was not, which was consistent with the discoloration or lividity on the left arm and not on the right. He opined that the victim had been moved and was on her left side "for a number of hours" before she was moved. (emphases added).

This testimony was used to support the theory that, "after the Defendant suffocated the victim, he later unsuccessfully attempted to move the victim's body to the freshly dug hole behind the trailer."

"Fixed lividity" can be contrasted with a "mixed" pattern of lividity, which occurs when a body has been placed in different positions in the 6-8 (or 10 or 12) hours after death. For instance, in Allen v. Wal-Mart Stores, Inc., parents claimed that their eight-month old daughter died when the air bed on which she was sleeping deflated during the night, causing her to suffocate when she was in a prone (face down), wedged position, with her face in the gap between the air bed and the wall. According to the victim's mother, she breastfed her daughter at 2:00 A.M., discovered her dead and in the prone position at 5:00, and arrived at the hospital at 7:00, whereupon fixed posterior lividity was detected at 8:00 A.M. According to the affidavit of Clifford C. Nelson, M.D.,

If this information is accurate, and [the victim] was in fact alive and did breast feed at approximately 2:00 AM, she likely died very shortly after feeding. The usual expectation under standard conditions is that lividity would become fixed at 8-12 hours after death. Lividity may become fixed in a shortened period of time if temperatures are increased. If lividity becomes fixed in a position inconsistent from that expected from the reported found position of the body, it must have been shifted between the time the body was found and when finally examined and described as fixed. Under such circumstances, a "mixed" pattern of lividity is usually identified. In this case, although lividity was described as posterior and fixed, no livor mortis was described consistent with a side down position in conjunction with [the victim] being found between the mattress and wall.

Therefore, although it is possible to get fixed posterior lividity in six hours, it is unlikely that [the victim] died in the described wedged position. If she died in the wedged position and remained in that position for three hours prior to being moved, she would be expected to have a mixed pattern of lividity associated with its shifting. Had [the victim] died close to 5:00 AM, lividity would not be expected to have been fixed by 8:00 AM (three hours) under the temperature and other conditions described. (emphases added).

I can't find a final decision in Allen, making me think that the case was settled.

This takes me to a recent case involving fixed lividity: The death of Hae Min Lee discussed in the Serial Podcast. The prosecution argued that Lee was killed between 2:15 and 2:36, but it now seems likelier that she died closer to 3:00 at the earliest. The key witness for the prosecution claimed that the 5'8" Lee was then "pretzeled up in the back of the trunk" of her Nissan Sentra. Then, in the 7:00 hour, Hae was taken out of the trunk and buried in Leakin Park, a claim allegedly corroborated by the fact that the defendant's cell phone pinged the cell tower that covers, among other things, Leakin Park at 7:09 and 7:16.

Here is an excerpt of the cross-examination of Assistant Medical Examiner Margarita Korell at trial regarding the frontal lividity detected in Lee's body: 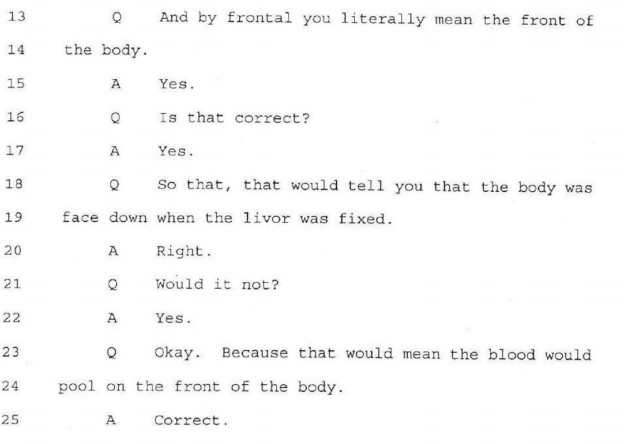 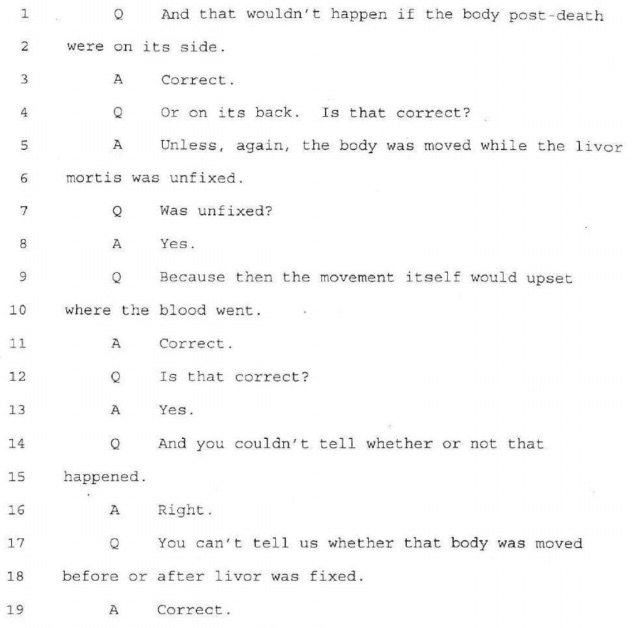 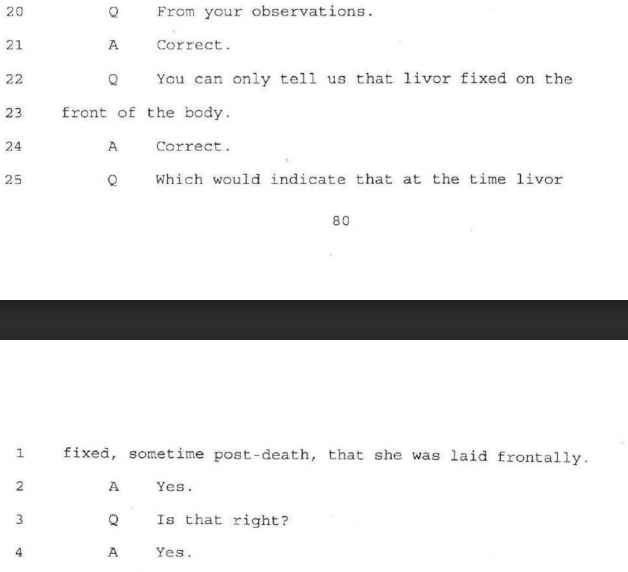 In other words, Lee had fixed lividity on the front of her body, meaning that she was face down when lividity was fixed. We also know from the Allen case (and the Lewis case) that Lee could not have been on her side for a few hours because that would have created a "mixed" pattern of lividity (some lividity on the front, some on the side) consistent with shifting.

So, what does this mean? First, if Korell's testimony is accurate, it's tough to believe Lee was "pretzeled up" in the trunk of her Sentra for hours, assuming that we take "pretzeled up" to mean "on her side." If this were the case, there should have been a "mixed" pattern of lividity, with at least some lividity on the side. This means that Lee was face down between killing and burial unless the burial was much earlier than claimed by the State.

Second, if Lee's body was not found face down in Leakin Park, there seem to be only two explanations: (1) Lee's body was placed face down soon after death and initially buried face down but then later repositioned after lividity became fixed; or (2) after Lee was killed, she was placed face down and not buried in Leakin Park until at least 6-8 (or 10-12) hours after her death (and probably on the later end, given the cold weather in Baltimore on January 13th), placing the burial closer to midnight at the earliest.

I haven't been able to find out the position of Lee's body when she was discovered, but defense counsel's cross-examination implies that she wasn't found face down. It also seems strange that a body would be repositioned from a face down position to some other position (especially the side position) after initial burial. But this is mere speculation on my part. What seems clearer is that Lee couldn't have been "pretzeled up" in her trunk for hours.

[Update: Susan Simpson has notified me of this document, stating that Lee's "body was on her right side" in Leakin Park. This means that Lee's body had to be face down for at least 6-8 hours before burial unless you think her body was repositioned after initial burial. It also means that it's virtually impossible the burial was in the 7:00 hour unless you believe it was repositioned after initial burial.

Listed below are links to weblogs that reference Fixed Lividity vs. a Mixed Pattern of Lividity & the Positioning of a Body After Death:

How did the defense not hammer this point home at every opportunity?

Good question. It looks like defense counsel flagged the issue a bit but failed to follow up. I would like to see some more documentation like the autopsy itself before making any final conclusions.