The Serial Podcast, Transcripts: The Judge's Denial of a Motion for Jurors to Visit the Best Buy

I've posted 27 entries Sarah Koenig's Serial Podcast, which deals with the 1999 prosecution of 17 year-old Adnan Syed for murdering his ex-girlfriend, 18 year-old Hae Min Lee, on January 13, 1999. These posts are collected in my Legal Companion to the Serial Podcast. We are now getting portions of the transcripts from Adnan's second trial, the trial that resulted in his conviction. Here's the transcript for day one, and here's the transcript from day two. The day two transcript is interesting for a number of reasons. One of these reasons is that it reveals how easily the State's case could have been destroyed.

This is part of a motion made by Adnan's defense counsel before trial (page 21-22 of the transcript): 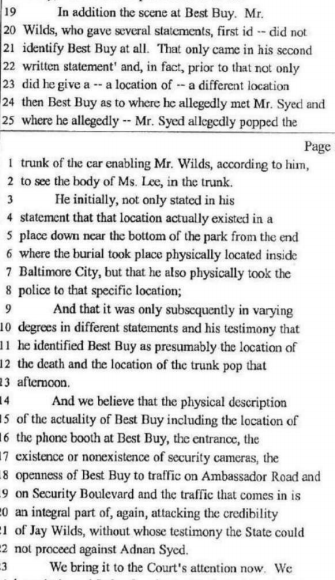 In other words, defense counsel questioned the reliability of Jay's statements regarding the murder/phone call/trunk pop happening at Best Buy based upon Jay's inconsistencies. Therefore, she made a motion for the jury to visit the Best Buy so they could see the actual parking lot and, inter alia, "the location of the phone booth at Best Buy...." At page 23 of the transcript, defense counsel adds that "Mr. Syed is willing to bear the cost of such a viewing." In response, the judge made a preliminary ruling denying the motion but noted that she might revisit the issue at trial:

Jay told the police that Adnan called him, told him to meet him at Best Buy, and was standing at a pay phone outside the Best Buy when Jay arrived. Then, Adnan popped the trunk of Hae's car and showed him Hae's body. Jay even drew the following map for police: 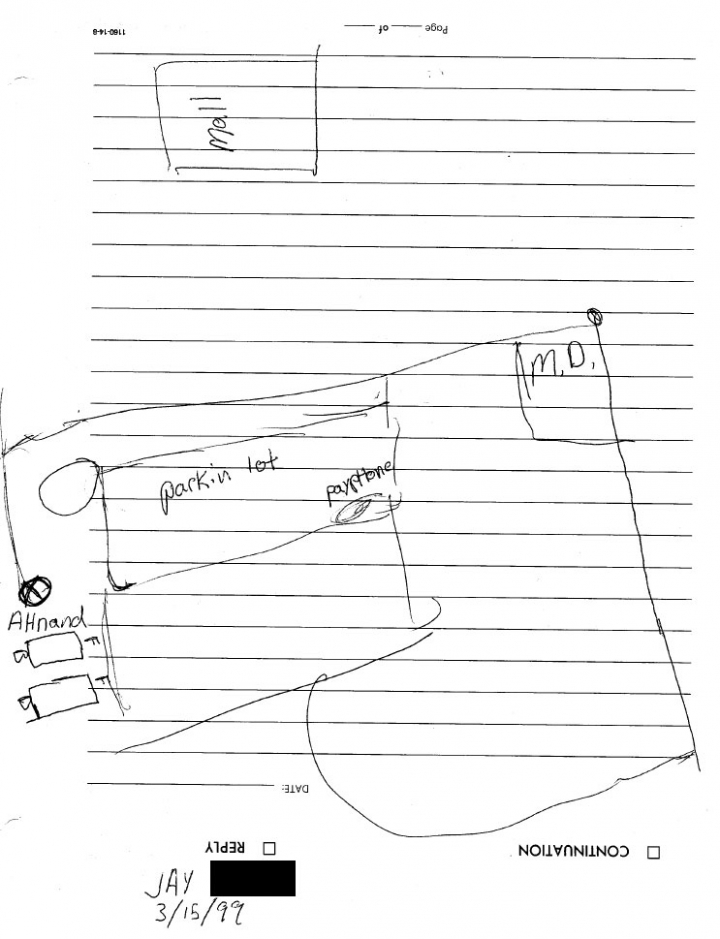 The jurors know that Jay has made many inconsistent statements. Best Buy isn't even mentioned in his first police interview. The prosecutor claims that the Best Buy call happened at 2:36 when Jay says it happened around 3:45. If the jurors go the crime scene, and there's no pay phone outside.... I'm reminded of the O.J. Simpson trial and Johnnie Cochran's infamous statement about the alleged murder gloves not fitting the former running back: "If it doesn't fit, you must acquit." The same probably holds true here. Assume there's no phone booth outside. In this case, defense counsel could have argued, "If there's no phone, guilt hasn't been shown."

But the trip to the Best Buy seemingly never happened. And the judge's denial of the issue wasn't something that really could have been reversed on appeal. In Corens v. State, 45 A.2d 340, 347 (Md. 1946), the Court of Appeals of Maryland concluded that "we must follow the general rule, accepted both in this country and in England, that the granting or refusing of a request to allow the jury to view the premises where a crime is alleged to have been committed is within the discretion of the trial court." Since Corens, Maryland courts have consistently repeated this reasoning to deny appeals on the ground that there should have been crime scene visits. See, e.g., Buzbee v. State, 473 A.2d 1315, 1324 (Md.App. 1984) ("Corens tells us quite clearly that to view or not to view is a discretionary question for the trial judge.").

Now, of course, as the judge noted, nothing was stopping the prosecution or defense from taking pictures or videos of the parking lot, which would have confirmed of dispelled the existence of a pay phone outside the Best Buy. But I'm guessing that never happened because Sarah Koenig is still questioning whether one existed in the final episode of Serial.

[Update:  A reader has drawn my attention to the fact that defense counsel later mentions this issue during her opening argument (page 150):

So, it seems like defense counsel or someone on her team did in fact go to the Best Buy and see that there was a pay phone "inside th[e] entrance." This brings into clearer focus defense counsel's motion to have the jury travel to the Best Buy to see "the location of the phone booth at Best Buy...." She apparently knew that Jay's police statement that he saw Adnan standing outside the Best Buy near a pay phone "in the parking lot" was wrong. That pay phone was inside. Also, if you look again at Jay's map, it shows the phone being at the very corner of the Best Buy whereas the entrance is in the middle.   So why didn't she mention these facts to the judge as the reason for a jury field trip to Best Buy?

Also, given this, I have to wonder why this was such a huge question in the podcast. I also wonder how much defense counsel pressed this issue during trial and closing argument. Were photos of the Best Buy taken and presented at trial? Is it possible that defense counsel was just assuming there was a pay phone insider the entrance? The whole thing is weird.].

Listed below are links to weblogs that reference The Serial Podcast, Transcripts: The Judge's Denial of a Motion for Jurors to Visit the Best Buy:

I don't think there's much to draw from Jay mis-placing the phone booth.