On Friday, I posted a first entry about the Serial Podcast, in which Sarah Koenig investigates the 1999 prosecution of 17 year-old Adnan Syed for murdering his ex-girlfriend, 18 year-old Hae Min Lee. In that post, I noted how Adnan's trial counsel seriously erred by failing to object in whole or in part to the admission of Hae's diary, which the prosecution introduced under Maryland Rule of Evidence 5-803(b)(3) to prove the nature of their relationship and how Hae felt in its aftermath. There were three ways that defense counsel could have objected to this evidence: (1) Hae's state of mind was irrelevant to any material issue at trial, cf., Jenks v. Naples Community Hospital, Inc., 829 F.Supp.2d 1235, 1248 (M.D.Flas. 2011); (2) the diary was merely cumulative of other evidence already in the record, see, e.g., People v. Fisher, 476 N.W.2d 889 (Mich. 1991) (Boyle and Riley, J., dissenting); and (3) the prosecution was using the diary to prove past facts, not present feeling, see, e.g., Crawford v. State, 770 N.E.2d 775, 780-81 (Ind. 2002). For a good example of a similar case in which diary entries of an ex-wife were deemed inadmissible in her husband's prosecution for her murder, you can take a look at the Supreme Court of Delaware's decision in Capano v. State, 781 A.2d 556 (Del. 2001).

In today's post, I'm going to address another evidentiary issue raised by Adnan in his direct appeal of his conviction to the Maryland Special Court of Appeals. According to Adnan's brief,

At trial, the State introduced a letter from Hae to Appellant, on the back of which Appellant and one of his classmates, Aisha Pittman, allegedly exchanged notes during a high  school class....The letter constituted inadmissible hearsay  which did not fall under any exception to the hearsay rule. In it, Hae told Appellant of her feelings about the break up, and about her perceptions and opinions as to Appellant's feelings  about the break up.

....I'm really getting annoyed that this situation is going the way it is....Your life is NOT going to end. You'll move on and I'll move on. But, apparently, you don't respect my decision....I NEVER wanted to end this like this, so hostile and cold....Hate me if you will. But you should remember that I could never hate you.

So, was this letter properly admitted?

Unlike with the diary, defense counsel did timely object to admission of this letter, but the court overruled the objection. Again, the court deemed the letter admissible under Maryland Rule of Evidence 5-803(b)(3), which provides an exception to the rule against hearsay for

On appeal, Adnan's objection to the admission of this letter was two-fold: (1) Hae's state of mind was irrelevant to any material issue of trial; and (2) the letter was inadmissible to the extent it referenced Adnan's state of mind. I've already argued why (1) is correct in connection with the diary. So, what about (2)? Again, I think that Adnan was correct. Why?

Rule 803(3) was approved in the form submitted by the Court to Congress. However, the Committee intends that the Rule be construed to limit the doctrine of Mutual Life Insurance Co. v. Hillmon, 145 U.S. 285, 295-300 (1892), so as to render statements of intent by a declarant admissible only to prove his future conduct, not the future conduct of another person.

A declarant's statement of intention may not be used to prove the subsequent actions of another because "the hearsay dangers of perception and memory are present....[A] declarant may be insincere; for example, the declarant may be concocting a 'cover story' for his or her true intentions or falsely boasting of a relationship with the other person." 6A Lynn McLain,Maryland Evidence 206 (2d ed.2001).

Therefore, as the Court of Special Appeals concluded in the present case, actions taken by individuals other than the declarant are irrelevant to the state of mind exception; "[T]he statement of intent is admissible to prove the declarant's future actions, not the future actions of someone else."

And there you have it. The letter should have been deemed inadmissible. Moreover, the admission of the letter was hugely important because the prosecution's theory of the case was that Adnan was devastated by the breakup, giving him the motive to kill Hae. 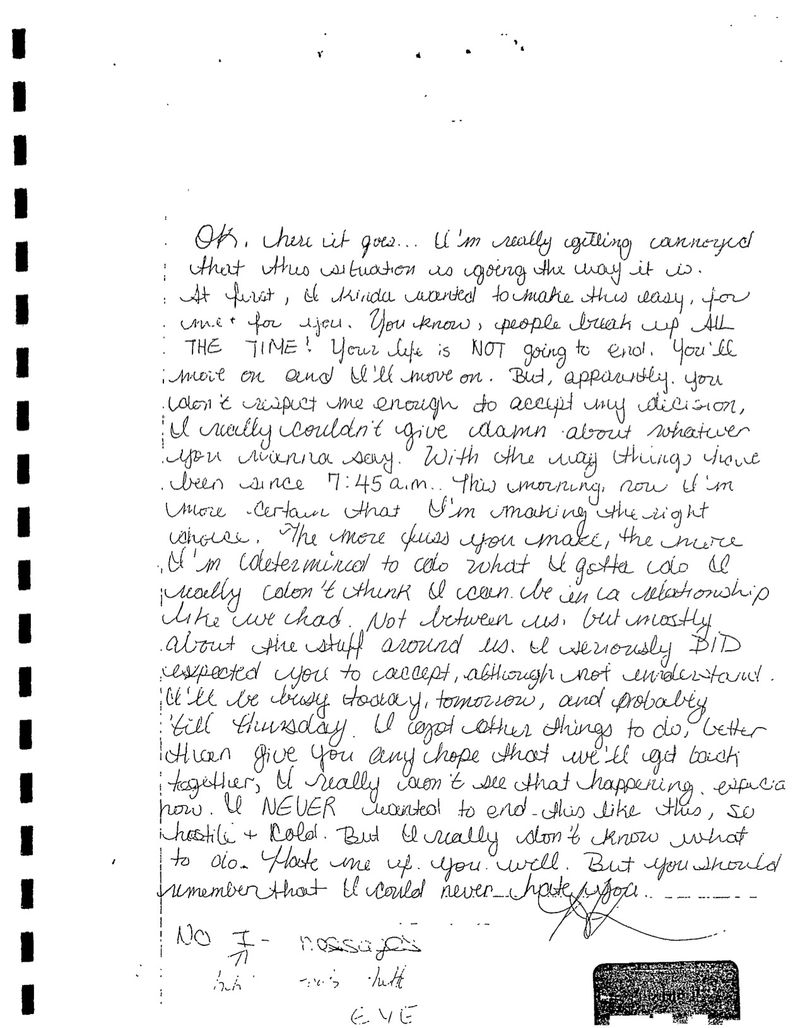 Listed below are links to weblogs that reference The Serial Podcast, Take 2: The Erroneous Admission of Hae Min Lee's Letter About Adnan Syed's State of Mind:

Do you agree with the law on this point? Don't you think the diary of the decedent should be admitted when it's critical evidence of a rocky end of a relationship?

In this case I would have thought the important thing about the letter was the comment purportedly written by the Appellant " I'm going to kill" and this refers to possible future action of the declarant. The letter provides a context. Personally I think it should be admissible and I'm glad common sense prevailed.

Amac, if the letter were offered for the nonhearsay purpose of providing context for the note on the back, I agree that it could have been deemed admissible. But the government's claim was that "the letter was admissible to show Hae Lee intended to end the relationship between herself and Syed. Maryland Rule 5-803(b)(3)." As I note in this post, I think that's a misinterpretation of the Rule. I do agree with you, though, that the note was admissible:

Just a note for accuracy - In the Capano case the murder victim was his girlfriend not ex-wife. Love reading your posts.