The Serial Podcast, Episode 1: Did Adnan Receive the Ineffective Assistance of Counsel?

I've done four preliminary posts (here, here, here, and here) about Sarah Koenig's Serial Podcast, which deals with the 1999 prosecution of 17 year-old Adnan Syed for murdering his ex-girlfriend, 18 year-old Hae Min Lee. Now, I will turn to the podcasts themselves. The first podcast is The Alibi, and it deals in large part with defense counsel's failure to investigate an alibi witness. Adnan eventually brings a claim that he received the ineffective assistance of counsel due to this failure to investigate the alibi witness. The judge denies Adnan's claim. Was this proper?

Adnan and Hae were students at Woodlawn High School in Baltimore County when Hae was strangled to death. The prosecution's theory of the case was that Hae was strangled off-campus sometime between 2:15 and 2:36 P.M. on January 13, 1999. There's just one problem with this timeline: A fellow student named Asia McClain wrote Adnan two letters after he came under suspicion in connection with the murder. You can read the first letter by clicking here. It says in relevant part:

Dear Adnan-- I hope I spelled it right. I'm not sure if you remember talking to me in the library on January 13, but I remember chatting with you." She says, quote, "we aren't really close friends, but I want you to look into my eyes and tell me of your innocence. If I ever find otherwise, I will hunt you down and whip your ass. OK, friend?" At the bottom she added a little note. "My boyfriend and his best friend remember seeing you there, too."

So, did defense counsel content McClain? No. After Adnan was convicted, Rabia Chaudry, an attorney and the mother [older sister] of Adnan's best friend, contacted McClain and got her to fill out an affidavit stating in relevant part that (1) she talked with Adnan at the library for 15-20 minutes while waiting for her boyfriend to give her a ride, which he finally gave her at 2:40 P.M.; and (2) "No attorney has ever contacted me about January 13, 1999 and the above information."

Now, there are a few complicating factors: First, Adnan's trial counsel died before his new attorney claimed he received the ineffective assistance of counsel at trial. Second, when Adnan's new attorney hired a private investigator to track down McClain, she allegedlt called the prosecutor from Adnan's trial and claimed that she'd only written the affidavit "because she was getting pressure from the family, and she basically wrote it to please them and get them off her back."

In the podcast, however, Koenig notes how she tracked down McClain, who claimed that the affidavit was accurate and that she simply had become concerned when the private investigator visited her because  "the last thing you want is a murderer being pissed off at you, knowing where you live."

All of this takes us to the fundamental question of this post, which is: Should the court have found that Adnan received the ineffective assistance of counsel (IAC)? Pursuant to the Supreme Court's opinion in Strickland v. Washington, a defendant proves an IAC claim by proving (1) that counsel’s performance "fell below an objective standard of reasonableness" as measured by "prevailing professional norms;" and (2) prejudice, i.e., "a reasonable probability that, but for counsel's unprofessional errors, the result of the proceeding would have been different."

Under this first prong, there is "a strong presumption that counsel’s conduct falls within the wide range of reasonable professional assistance," and the defendant must overcome the presumption that the representation "might be considered sound trial strategy." United States v. Luck, 611 F.3d 183 (4th Cir. 2010). But is it sound trial strategy to not investigate an alibi witness? Strickland v. Washington actually dealt with a claim that defense counsel failed to fulfill his duty to investigate, prompting the Supreme Court to state the following:

These standards require no special amplification in order to define counsel's duty to investigate, the duty at issue in this case. As the Court of Appeals concluded, strategic choices made after thorough investigation of law and facts relevant to plausible options are virtually unchallengeable; and strategic  choices made after less than complete investigation are reasonable precisely to the extent that reasonable professional judgments support the limitations on investigation. In other words, counsel has a duty to make reasonable investigations or to make a reasonable decision that makes particular investigations unnecessary. In any ineffectiveness case, a particular decision not to investigate must be directly assessed for reasonableness in all the circumstances, applying a heavy measure of deference to counsel's judgments.

But how much deference is to be given when defense counsel fails to contact a person who seems to be a pretty good alibi witness? In In re Parris W., 770 A.2d 202 (Md. 2001), this is kind of what happened. Defense counsel was altered to the existence of five alibi witnesses but had subpoeans issues for the wrong trial date, meaning that the alibi witnesses did not show up at trial. The Court of Appeals of Maryland concluded "[t]hat counsel's performance was deficient, even under the highly deferential standard of Strickland." As support, Maryland's highest court cited to Johns v. Perini, 462 F.2d 1308 (6th Cir. 1972), in which the Sixth Circuit found IAC because defense counsel failed to investigate the defendant's alibi that he was at work at the time of the drug crime charged.

I feel like Parris W. and Perini are pretty consistent with precedent from across the country regarding alibi witnesses under the first prong of Strickland: If defense counsel wholly fails to investigate/produce promising alibi witnesses, (s)he has failed to render reasonable professional assistance. This is also consistent with what attorneys contacted by Koenig told her:

[W]hat is inconceivable, they all said, is to not ever contact Asia McClain, to never make the call, never check it out, never find out if her story helps or hurts your case. That makes no sense whatsoever. That is not a strategy. That is a screw-up.

Not according to the judge. In fairness to the judge, I don't actually have a copy of his opinion rejecting Adnan's IAC claim (if any readers have a copy, please e-mail it to me at Mille933@law.sc.edu). Instead, I'm relying on Koenig's reporting of his reasons. And here they are:

1. "The judge wrote in his opinion that [defense counsel]'s decision not to use Asia McClain as an alibi witness was strategic. After all, Asia's original letters didn't specify an exact time."

No, they didn't, but defense counsel's own notes say that "Asia plus boyfriend saw him in library 2:15 to 3:15." That's directly inconsistent with the prosecution's timeline. And even if defense counsel didn't know these times, how is it strategic to fail to contact a witness who saw the defendant at the same afternoon when the crime was committed.

2. "And [defense counsel] could've reasonably concluded that Asia was offering to lie in order to help Adnan."

True, but this is also the case for every alibi witness in every criminal case ever prosecuted. That said, Asia was not Adnan's relative. She wasn't his girlfriend. She wasn't a close friend. The judge is correct that Asia did not state when she saw Adnan, but she did state that she wasn't a close friend to Adnan. That's not a person with a strong motive to lie as an alibi witness.

3. "And finally, he wrote, Asia's letter contradicted Adnan's own alibi. Asia says she saw him at the public library, but Adnan said he was on the school campus the whole afternoon."

Koenig does a good job of discrediting this in the podcast: "Maybe the judge didn't understand that Woodlawn library is basically part of the campus." I agree. Take a look at this screenshot from Google Maps. 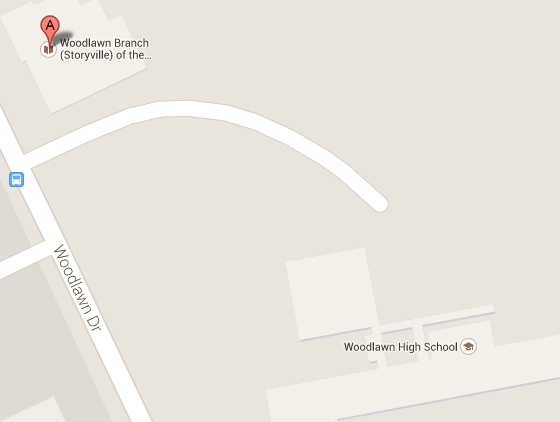 I certainly don't think that this "inconsistency" was enough for defense counsel to not even contact the alibi witness. I thus disagree with the judge's apparent rejection of Adnan's IAC under the first prong of Strickland. Now, this still leaves the question of whether could establish prejudice, and I would need to know the entire evidentiary record at trial to answer this question. But it certainly seems from what I've head about the case so far that Adnan would have a pretty good argument under this second prong as well.

Listed below are links to weblogs that reference The Serial Podcast, Episode 1: Did Adnan Receive the Ineffective Assistance of Counsel?:

What if defendant confessed his guilt to counsel? Would that preclude her from investigating this particular lead? Knowing that any testimony from witness would be perjury?

ChadT, I think this gets to the difference between investigating Asia and calling her as a witness. If defense counsel talked to Asia and determined that there was no way she could have seen Adnan when she said she saw him, she could not/would not have put her on the stand. But that's a determination you make after talking with her, not before talking with her.