Federal Rule of Evidence 615 provides that

At the request of a party the court shall order witnesses excluded so that they cannot hear the testimony of other witnesses, and it may make the order of its own motion. This rule does not authorize exclusion of (1) a party who is a natural person, or (2) an officer or employee of a party which is not a natural person designated as its representative by its attorney, or (3) a person whose presence is shown by a party to be essential to the presentation of the party's cause, or (4) a person authorized by statute to be present.

You are a trial judge and have decided to order witnesses excluded. Defense counsel argues that the order should not apply to the defense's private investigator because the investigator interviewed several government witnesses and could provide immediate insight to their cross-examinations if allowed to remain in the courtroom. How should you rule under Federal Rule of Evidence 615(3)? That was the answer facing the Sixth Circuit in its recent opinion in United States v. McClendon, 2010 WL 272878 (6th Cir. 2010).

Like its federal counterpart, Idaho Rule of Evidence 803(3) provides an exception to the rule against hearsay for:

A statement of the declarant's then existing state of mind, emotion, sensation, or physical condition (such as intent, plan, motive, design, mental feeling, pain, and bodily health), but not including a statement of memory or belief to prove the fact remembered or believed unless it relates to the execution, revocation, identification, or terms of declarant's will.

Now, at first blush, it seems like this exception is pretty broad and would allow for the admission of many statements. Basically, as long as a person says something about how he is (presently) feeling or what he plans to do (in the future), the statement seemingly could be admitted under the exception; only statements about what transpired in the past would be excluded. As the recent opinion of the Supreme Court of Idaho in State v. Shackelford, 2010 WL 173825 (Idaho 2010) makes clear, however, there is still a relevance requirement to this exception, and, according to the court, it was not satisfied in the case before it. 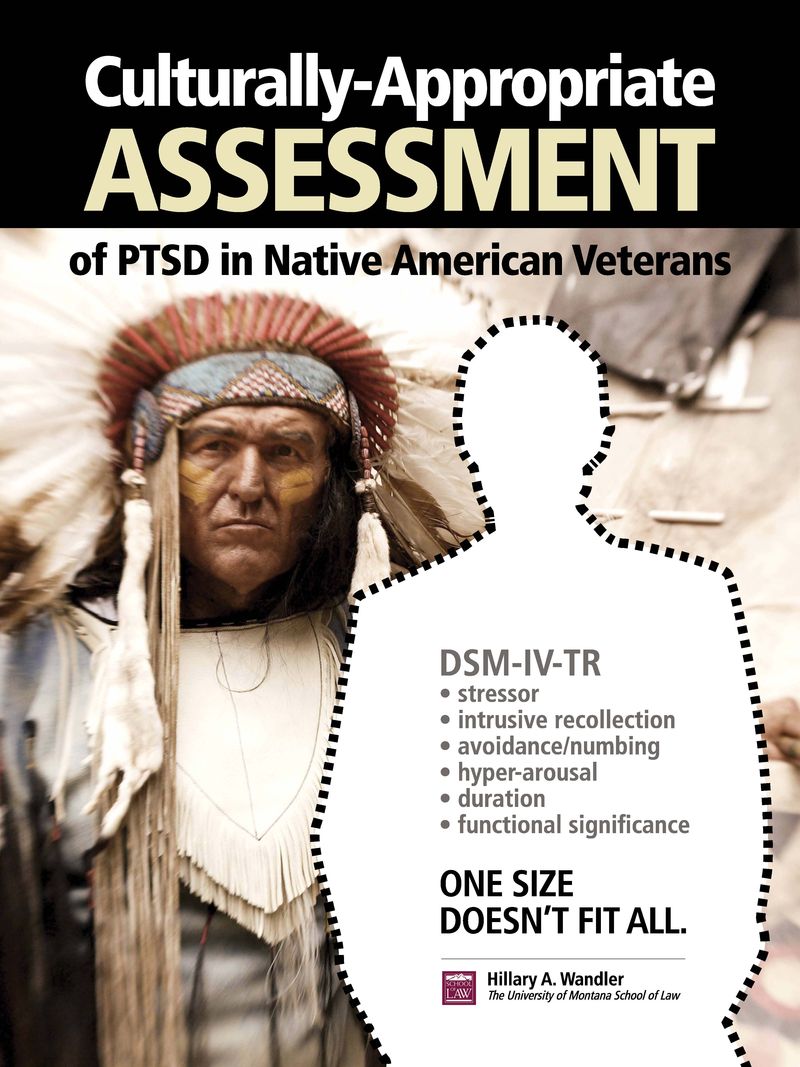 The AALS Poster Project: Follow the Money: The Impact of Federal, State and Local Funding Strategies for Child Welfare Services and the Impact of Local Levies on Adoptions in Ohio

I have written a couple of posts on this blog (here and here) about Brsicoe v. Virginia, which I called a "potentially landmark Confrontation Clause case in the latter post. I had thought that the Supreme Court, with a new Justice since Melendez-Diaz v. Massachusetts was decided, might have overturned that opinion, fleshed out the definition of "testimonial," or blown up the whole Confrontation Clause framework and started again at zero. Instead, here was the Court's holding today:

We vacate the judgment of the Supreme Court of Virginia and remand the case for further proceedings not inconsistent with the opinion in Melendez-Diaz v. Massachusetts, 557 U.S. ___ (2009)

It is so ordered.

This is what is known as a grant, vacate, and remand (a/k/a GVR), and it means that the status quo remains the status quo in the Confrontation Clause arena.

Statements Against Interest And The Confrontation Clause, Take 2: Professor James Duane On The Advisory Committee Note To The Amendment To Rule 804(b)(3)

Share
Back in November, I posted an entry about an e-mail sent by Regent Law School Professor James Duane to the Evidence professor listserv concerning an odd paragraph in the 2009 Advisory Committee Note to the amendment to Federal Rule of Evidence 804(b)(3). In that paragraph, the Committee indicated that it did not "need to address the relationship between Rule 804(b)(3) and the Confrontation Clause, because the requirements of this exception assure that declarations admissible under it will not be testimonial." Professor Duane's e-mail challenged this conclusion, and I agreed with the points that he made. Professor Duane has now followed up with a second e-mail, and I also agree with the points that he makes in it and have again posted his e-mail below:

Ten Years Have Got Behind You: Court Of Criminal Appeals Of Tennessee Affirms Felony Conviction Impeachment Ruling BECAUSE Of Timing Calculation Error

Tennessee Rule of Evidence 609(b) provides that

Evidence of a conviction under this rule is not admissible if a period of more than ten years has elapsed between the date of release from confinement and commencement of the action or prosecution; if the witness was not confined, the ten-year period is measured from the date of conviction rather than release. Evidence of a conviction not qualifying under the preceding sentence is admissible if the proponent gives to the adverse party sufficient advance notice of intent to use such evidence to provide the adverse party with a fair opportunity to contest the use of such evidence and the court determines in the interests of justice that the probative value of the conviction, supported by specific facts and circumstances, substantially outweighs its prejudicial effect.

In its recent opinion in State v. Sweat, 2010 WL 153038 (Tenn.Crim.App. 2010), the Court of Criminal Appeals of Tennessee found that the trial court erred in failing to balance probative value and prejudicial effect before determining that two of the defendant's convictions that it determined to be more than ten years old would be admissible in the event that he testified. Luckily for the trial court, however, the court of appeals also found that the trial court erred in finding that the convictions were more than ten years old.

The AALS Poster Project: A Story of Collaboration and Atomizing Facts 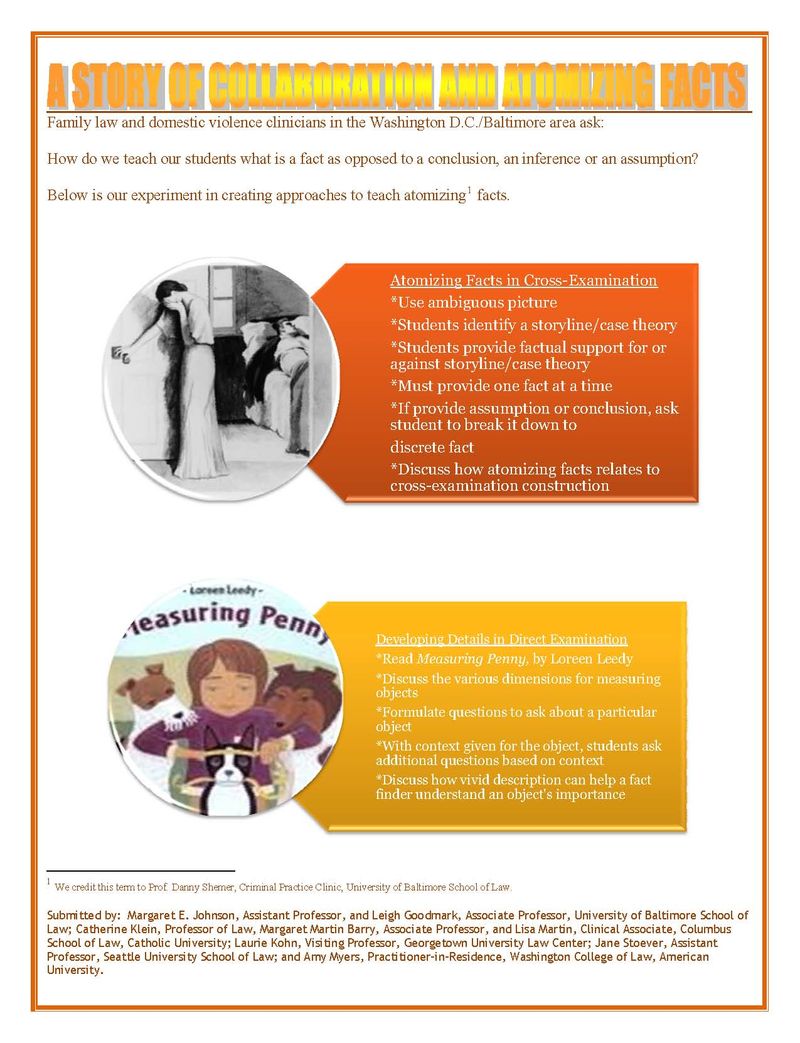 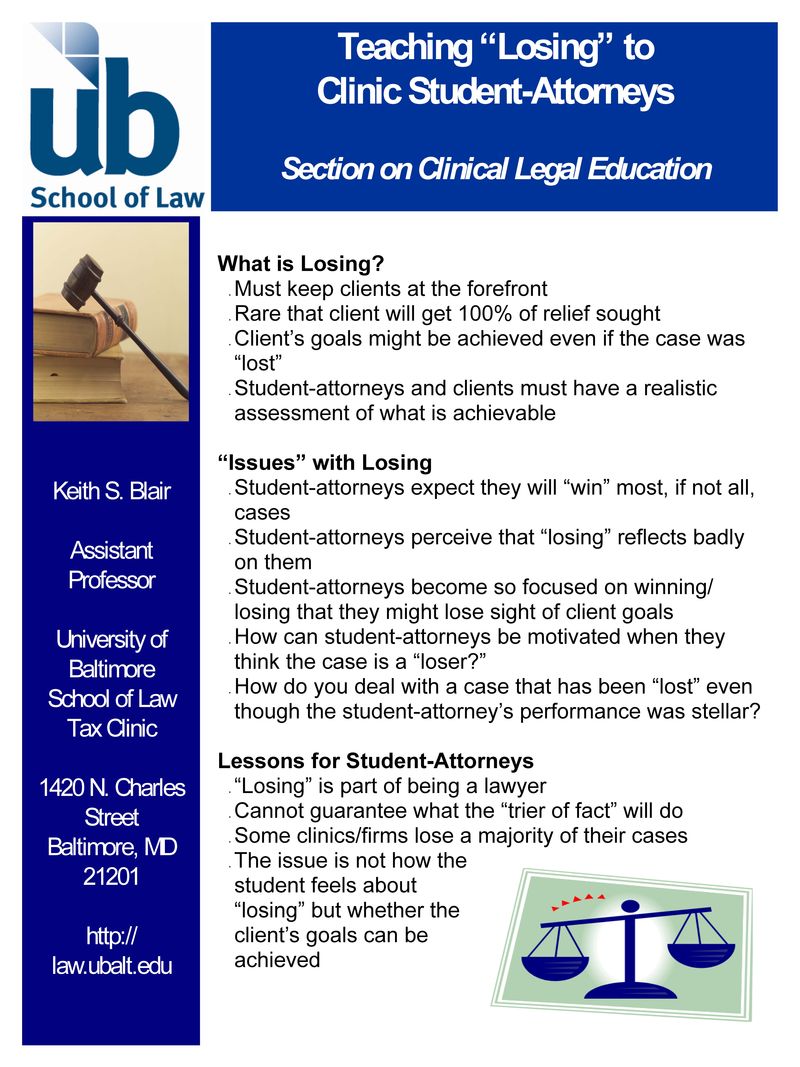 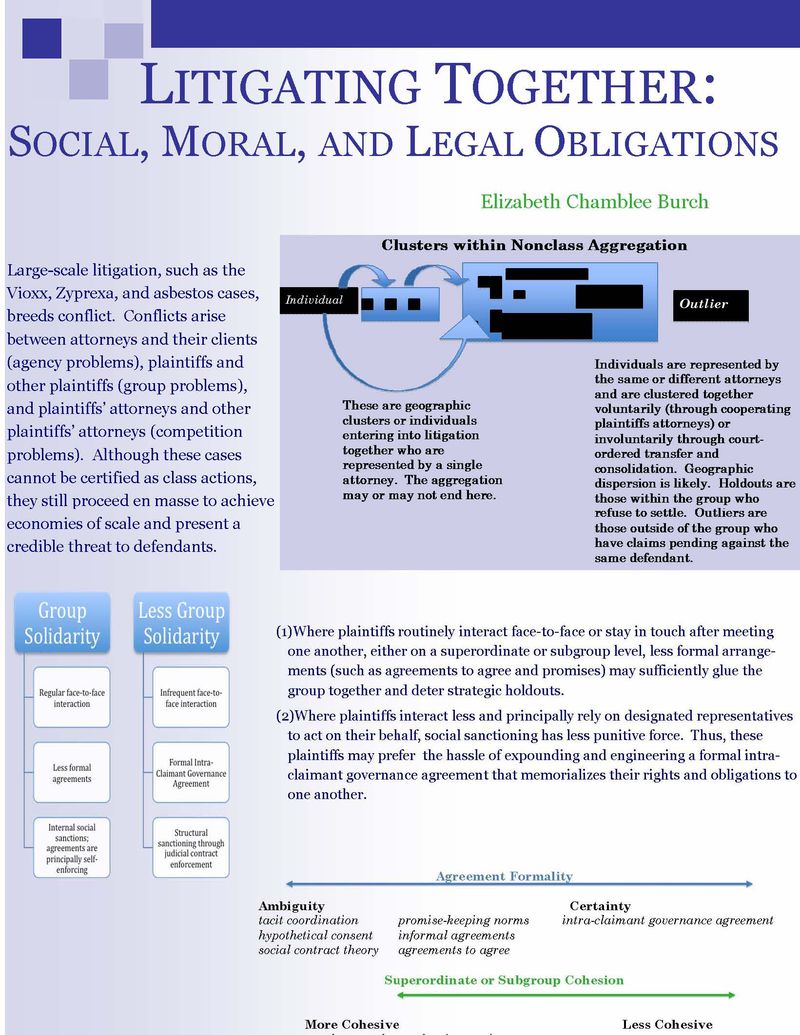 The AALS Poster Project: Christine E. Rollins' Turning the Light Bulbs On - Effective Ways To Teach CREAC To All Types Of Student Lawyers

Christine E. Rollins presented the poster, Turning the Light Bulbs On - Effective Ways To Teach CREAC To All Types Of Student Lawyers:

The AALS Poster Project: Camille Davidson's Octomom and Multi-Fetal Pregnancies: Is the Insurance Industry a Co-Conspirator?

Camille Davidson presented the poster, Octomom and Multi-Fetal Pregnancies: Is the Insurance Industry a Co-Conspirator?: 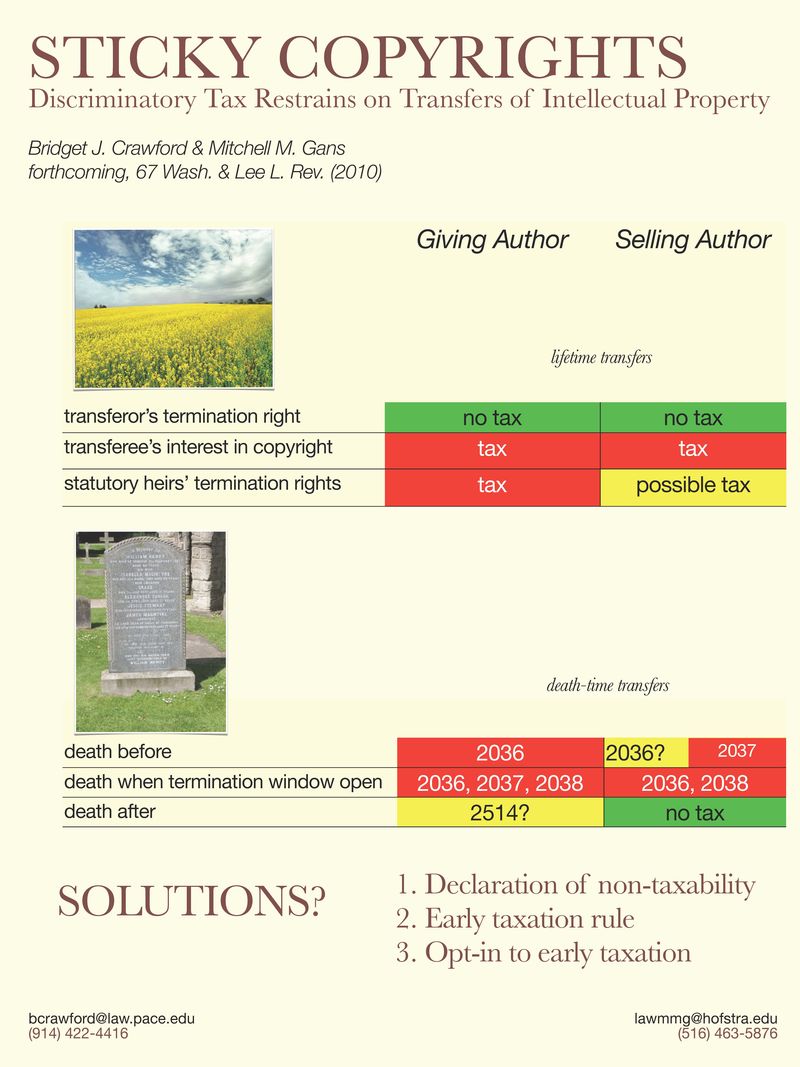 The AALS Poster Project: Ernesto Hernández-López's "Is race implicit in US authority over the base at Guantánamo Bay, Cuba?"

Share
Ernesto Hernández-López presented the poster, Is race implicit in US authority over the base at Guantánamo Bay, Cuba?:

The AALS Poster Project: An Introduction

Share
In its call for proposals last year, the Legal Writing Institute noted that "[p]oster presentations are an increasingly popular way to present scholarly and pedagogical ideas" but that "poster presentations are a relatively new format for the legal writing community." The same applies to the legal academy as a whole. "At the 2005 [AALS] Annual meeting in San Francisco, the AALS Section on Professional Responsibility sponsored posters on empirical research." Thereafter, "[t]he AALS Committee on Sections and the Annual Meeting was delighted by this innovation and decided that all AALS Sections should have the opportunity to sponsor posters at the 2006 AALS Annual Meeting."
The way I see things, though, not enough professors have availed themselves of this innovation. There are probably a variety of reasons for this insouciance, probably not the least of which is that the poster presentations are scheduled for the same time as AALS panels, meaning that attendees either have to leave panels early or attend panels late to be able to interact with poster presenters during their designated hours. The AALS later posts PDFs of these posters to its Annual Meeting sites (see here, here, and here), but I'm guessing that not many people visit these sites after these conferences are over, making them sort of like the Ark of the Covenant at the end of "Raiders of the Lost Ark." Besides, if you download one of these posters, all you have is the poster, not the presenter's reason for creating it or explanation of it.
Thus, this year, I decided to start the AALS Poster project. Pursuant to this project, I studied each of the posters at the conference and interacted with each of the presenters during their designated hours. I asked the presenters about why they created their posters, the thesis of their posters, how the posters fit into their scholarship, etc. Over the next few weeks, I will spotlight each of these posters and their presenters on this blog, and I hope that these posts draw some of the attention that these posters and presenters deserve. Of course, nothing substitutes perfectly for the real thing, and I would recommend that attendees at successive AALS conferences stop by during the designated hours and discuss the posters with their presenters. I found such discussions to be very rewarding.
-CM

Federal Rule of Evidence 1002, the Best Evidence Rule, provides that

That said, Federal Rule of Evidence 1004(1) provides that

The original is not required, and other evidence of the contents of a writing, recording, or photograph is admissible if...[a]ll originals are lost or have been destroyed, unless the proponent lost or destroyed them in bad faith.

It is very difficult for the opponent of such "other evidence" to prove "bad faith," and a showing of negligence by the proponent is generally not enough to prevent the application of Federal Rule of Evidence 1004(1). As the recent opinion of the United States District Court for he DIstrict of New York in Vagenos v. LDG Financial Services, LLC, 2009 5219021 (E.D.N.Y. 2009), makes clear, however, this does not mean that the opponent is without recourse.

Federal Rule of Evidence 803(8)(B) provides that

Records, reports, statements, or data compilations, in any form, of public offices or agencies, setting forth...matters observed pursuant to duty imposed by law as to which matters there was a duty to report, excluding, however, in criminal cases matters observed by police officers and other law enforcement personnel.

In other words, police reports are not admissible in criminal cases. But why? That was the question addressed by Judge Posner in his recent opinion in United States v. Hatfield, 2010 WL 114930 (7th Cir. 2010), although his analysis was irrelevant to his conclusion.

A week ago, I posted an entry about a Maryland case in which the Court of Appeals of Maryland strained to find that a sergeant's testimony did not violate Maryland's counterpart to Federal Rule of Evidence 704(b), which provides that

No expert witness testifying with respect to the mental state or condition of a defendant in a criminal case may state an opinion or inference as to whether the defendant did or did not have the mental state or condition constituting an element of the crime charged or of a defense thereto. Such ultimate issues are matters for the trier of fact alone.