Earlier this year, in his dissenting opinion in Cedar Point Nursery v. Hassid, Justice Breyer wrote that “most government action affecting property rights is analyzed case by case under Penn Central’s fact-intensive test.” That statement reflects conventional wisdom. Supreme Court justices have often said similar things, as have many academics. They tend to assume—with some exceptions—that the most prevalent cases and the most intellectually challenging and important questions arise from regulatory takings jurisprudence, with the Penn Central standard governing most of the action.

But for takings cases against the federal government, that conventional wisdom is wrong. I recently compiled a database of takings claims filed in the United States Court of Federal Claims—which hears almost all takings claims against the federal government—between 2000 and 2014. The database tracks cases from filing to completion, and it includes data on numbers of plaintiffs, numbers of different types of claims, case outcomes, and the amount of money paid by the federal government, sometimes through court judgments but usually as part of settlements. The resulting study is now available here. It will be published next year in the BYU Law Review.

The resulting findings confirm conventional wisdom in some ways, but in others they contradict it. Among the findings I found most interesting: 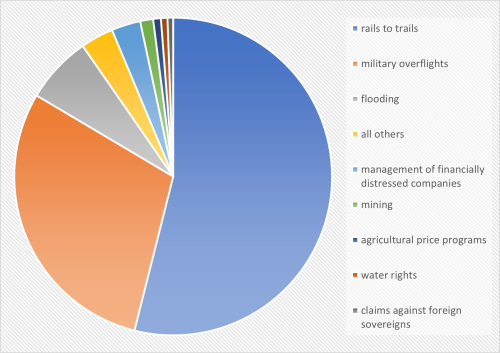 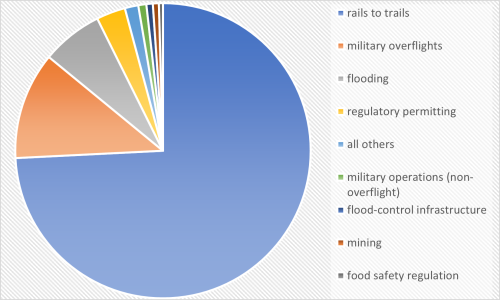 Another finding sweeps more broadly. In the 1980s and 1990s, many conservative activists hoped, and many liberals feared, that takings litigation would hobble the regulatory state. The goal, or the worry, was that widespread litigation would force government to pay compensation for much of its regulatory work, which would make regulation a whole lot less likely. At the federal level, and during the time period I studied, there is scant evidence that takings litigation has played that role. Most federal regulatory agencies have been largely untouched by takings litigation, and big business brings very few takings cases. Struggles over the extent of government regulation remain central to our political and legal systems, of course, but the most important struggles are not playing out through takings litigation.

I think the study raises as many questions as it answers, and the biggest unanswered question is whether a similar study of takings litigation against state and local governments would produce similar results. For this study, I could not answer that question; databases of state-court complaints were very incomplete, which meant I could not search for state-court takings complaints in any sort of systematic way.  James Krier and Stewart Sterk’s excellent study of state-court takings decisions suggests that regulatory takings cases are more prevalent in state court than they are in federal court, though it is possible the numbers might shift (in either direction) if one looked at the numbers of plaintiffs who file cases rather than at numbers of published decisions.  But even if the Court of Federal Claims’ takings docket may be an outlier, it’s a big, important outlier. The federal government is an influential regulator, to say the least, and takings litigation against it should be a focus of academic and judicial interest.

Again, the full study is available here. It still is in draft form, and comments are welcome.