The Ninth Circuit, the Clean Water Act, and Septic Tanks

Last week, the Ninth Circuit decided Hawai’i Wildlife Fund v. County of Maui, a case involving Maui County’s practice of pumping wastewater into wells, from which the wastewater flowed through a subsurface aquifer and into the Pacific Ocean.  The County, according to the court, needed a National Pollutant Discharge Elimination System (NPDES) permit for this practice.  It did not matter that the county’s wastewater traveled through groundwater on its way to the ocean; according to the Ninth Circuit, releasing pollutants from a point source to navigable waters still requires permitting even if those pollutants’ pathway is indirect.

The decision is well-reasoned and carefully explained.  The Ninth Circuit grounded its holding in both the text and purposes of the Clean Water Act and in a series of prior decisions (including Justice Scalia’s Rapanos plurality opinion), and the outcome, which prevents the county from “doing indirectly that which it cannot do directly,” in the Ninth Circuit’s words, seems fair.  The Ninth Circuit also took pains to explain that it was not holding that all indirect pollutant pathways between point sources and navigable waters would require NPDES permitting.

But the opinion still raises some thorny questions about the scope of NPDES permitting obligations.  The basic situation in this case—pollutants traveling from a point source through groundwater and into surface water—is hardly rare.  Nor is there a sharp break point between the fact pattern of this case, which involved a single large source and wells fairly close to the surface waterway, and fact patterns that would involve much larger numbers of sources and/or longer or more indirect flow pathways.  Most shallow groundwater is connected to surface waterways, and much of the pollution that gets into groundwater winds up in surface waterways, and the amount of interconnection is often a matter of degree.  That then raises the question: just how far upgradient does the Ninth Circuit’s reasoning go?

Of many possible scenarios where that question might arise, one strikes me as particularly intriguing.  Do all, some, or none the millions of septic tanks in the United States require NPDES permitting? 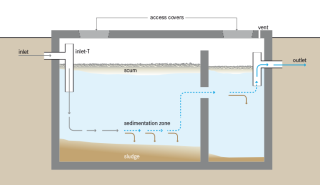 The argument in favor of those requirements is straightforward.  NPDES permits are necessary if a point source releases pollutants into navigable waters.  Septic tanks appear to qualify as point sources, for, as the image above shows, their effluent emerges through pipes or other forms of “discrete conveyances.”  They release pollutants, sometimes in fairly large quantities.  And while those releases usually are into groundwater, many of the pollutants that leave septic tanks wind up in surface waterways—sometimes through fairly short pathways.  Lakes in New England or the upper Midwest, for example, are often surrounded by houses served by septic tanks.  The whole system is rather similar to Maui County’s wastewater wells, except that the scale is smaller, the sources are more dispersed, and as the tanks age and begin to fail, the sewage is increasingly untreated.

So are septic tanks point sources?  A quick Westlaw search reveals a common practice, in secondary source materials, of referring to septic tanks as non-point sources.  But that may say more about the sloppiness with which authors use the term “non-point source” than about the appropriate legal classification for septic systems.  After all, it is also common, in secondary source literature, to refer to urban stormwater runoff as non-point source runoff, and those references are mostly wrong and legally inconsequential.  To my knowledge, neither EPA nor the states are in the habit of requiring NPDES permits for septic tanks, but, again, there are often disparities between what laws require and what regulators actually have the time or inclination to do.  A few cases, including, most notably, the Fifth Circuit’s decision in United States v. Lucas, 516 U.S. 316 (2008), have upheld classifications of septic tanks as point sources, but the decisions involved tanks located over wetlands or that were piped directly to surface waterways.  That leaves millions of septic tanks in a gray area.

A closely related question is whether classifying septic tanks as point sources would be a good idea.  The arguments against such a classification are obvious: it would bring thousands of additional permittees, most of them individual homeowners, into a permitting system, which sounds unwieldy at best and intrusive at worst.  On the other hand, general permitting might reduce some of the permitting burdens, particularly if the state regulators who implement most NPDES permitting programs just fold their permits into other preexisting septic system regulations.  The NPDES permits then might function only as a backstop, requiring additional steps only to the extent that an effective program of septic tank regulation doesn’t already exist.  And that backstop might be valuable.  If I owned lakefront property, I might be rather reluctant to pay to upgrade my septic system if I’m the only one doing an upgrade.  But if my neighbors’ permits require upgrades as well, I might think that the expense is amply justified by the benefits—including raised property values—associated with a cleaner lake.

Last week’s decision did not address these fact patterns, and the court took pains to limit its holding to the factual circumstances before it.  But I suspect it is a preview of additional litigation to come, and that some of that litigation may involve the humble but exceedingly abundant septic tank.

Colorado regulates septic systems (referred to as on-site wastewater treatment systems) under Water Quality Control Commission regulation 43. Systems under 2000 gallons per day are managed by county health departments. Systems over 2000 gpd are treated like any other point source but handled through a general permit program. For the regulation, see https://www.colorado.gov/pacific/sites/default/files/43_2017%2806%29_TOC.pdf

septic tanks at commerical properties are often regulated as class V UIC wells under the SDWA. they have been cause of quite a few superfund sites usually when they received wastewater from dry cleaners. the White Swan Cleaner Suerfund in New Jersey is the poster child for this scenario.

Thanks for the great post and raising the interesting question about septic systems as point sources. Certainly, if one of the basic rationales in support of federal environmental statutes was that they’re a more efficient way of dispensing justice for the never ending string of nuisance cases caused by pollution in the modern world, then we could envision a NPDES general permit covering these millions of discrete conveyances. I suppose the problem is we don’t really have a tidal wave of claims involving septic systems to date. But that’s not to say that such issues are unheard of or that courts aren’t grappling with odd ways to deal with it. Here’s a recent case in MD involving an inverse condemnation claim against the government for failing to enforce a consent decree that was drafted to force a town to deal with dozens of failing septic systems that had destroyed the property owner’s lake. Lord knows industry would probably rather have a rarely enforced and weakly drafted general permit covering those septic systems than a consent decree with stipulated penalties. So, at least in some cases, there’s a need and a more effective solution for using the Clean Water Act to cover septic systems. And with a greater number of waterways in the country being overwhelmed by nutrient pollution, maybe this will also help train our focus on septic systems, which may be failing in greater numbers in the coming years as a growing percentage of them reach the end of their useful life. (True, agriculture is the dominant source of nutrient pollution, but TMDLs seem to have been much more successful in pushing POTWs and regulated point sources to take on ever greater WQBELs in their permits, rather than causing unregulated source sectors to do anything about their share of the loads.)