The Puzzle of California’s Climate Leadership

Last Friday, UC Davis School of Law’s Environmental Law Society and the Environs journal held their 2017 Symposium, The Future of Climate Change Law & Policy: View to 2030.  It was an excellent event, with many great speakers and terrific attendance -- big congratulations to the student organizers: Sophie Wenzlau, Dane Jones and Jamie Katz!  Panels dealt with California’s new SB32 (which updates AB32 by writing into law California’s 2030 goal of reducing its emissions to 40% below 1990 levels by 2030); climate change and agriculture; zero emissions vehicles; and California’s leadership in international climate law.

A couple speakers on the final panel about international connections couldn’t come at the last minute, so I and several of my colleagues were asked to step in. The panel went well, but I had one of those experiences that one should not have after more than 10 years of teaching and presenting on panels – I spoke for 9 (out of 10) minutes without getting to the point!  Of course, we all hate when professors do this!  I can only offer the excuse that I am out of practice, and I have been through a ridiculous amount of cancer treatment in the past three and a half years. But it was a shame because I really had some important knowledge that I wanted to convey, and I bombed it.

This blog post is my attempt at a re-do.   The very interesting and timely question that I wanted to address was how and why California has made so many international linkages in climate policy.  Everyone knows that California has been a climate change leader within the United States.  But it may be forgotten that California has also been extremely active internationally, working with other subnational jurisdictions throughout the world.  The map below gives you a clear picture: 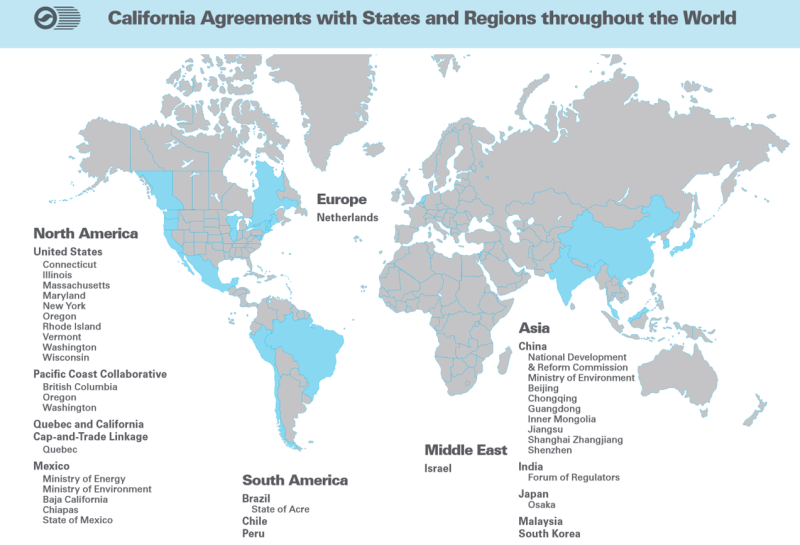 An early demonstration of California’s interest and capability to make agreements with other subnational jurisdictions came from California’s leading role in the Western Climate Initiative (WCI) starting in 2007. Other participants included six states (AZ, NM, UT, OR, WA, and MT) and four Canadian provinces (BC, Manitoba, Ontario and Quebec). WCI contemplated a cap-and-trade program that would include all the WCI jurisdictions. Why did California try so hard to work with other states and Canadian provinces? Was it to look big and impress?  Well, maybe, but there was an important economic policy reason, too. As WCI recognized, “a broad geographic scope will also reduce overall compliance costs and can help mitigate leakage risks.”  it was in this same timeframe that the US came closest to getting a federal climate law. In June 2009, the House passed the Waxman-Markey Bill in a 219-212 vote.  But then the bill died in summer 2010 without a hearing or a vote in the Senate.  WCI also progressively fell apart in 2009/10 as new state leaders came into office.  By 2011, only California and Quebec were working on establishing cap-and-trade programs.

They both did, and in January 2014, the two cap-and-trade systems were formally linked.  This meant that compliance instruments from Quebec’s program could be used in California’s program, and vice versa.  This is useful for regulatory compliance because it might be that there are emissions reductions that can be obtained at lower cost in Quebec.  Or more broadly, the overall cost of reducing emissions might be lower in Quebec.  When the two systems are linked (and in the absence of rules that make it otherwise), those lower-cost emissions reductions will happen first, and the joint California-Quebec program will be able to collectively reduce emissions at a lower cost than a California-only program would.

If you, for whatever reason, wanted to see those emission reductions happen in California, you may not be happy about all this. But for those who are subject to the regulation and want to buy compliance instruments (i.e. tradable permits) rather than reduce emissions themselves, this linkage should reduce their compliance costs. California is now preparing to formally link with the province of Ontario by January 1, 2018.

In large part, it is this pursuit of the lowest cost emissions reductions that has fueled California’s foreign policy on climate change. Aside from linked programs in Canadian provinces, the other international opportunity that California has extensively cultivated is in tropical forestry offsets.  In 2008, California founded the Governors’ Climate and Forests Task Force (GCF) to influence the development of the regulatory architecture to ultimately enable emissions reductions in the tropical forests of several developing countries to serve as compliance instruments in California’s cap-and-trade program.   Currently, GCF includes 29 subnational jurisdictions in eight countries sharing information and best practices.

A 2010 MOU among California, the Brazilian state of Acre, and the Mexican state of Chiapas contained recommendations for how Acre and Chiapas would be able to generate “REDD offset credits” that could serve as compliance instruments in California’s cap-and-trade program.  Of course, the idea is that reducing deforestation in tropical rainforests has the dual benefits of saving rainforest ecosystems and preventing emissions.  And, at some point, reducing emissions by preventing deforestation is expected to be cheaper than additional emissions reductions within California, Quebec, and Ontario. These credits could enable California and other cap and trade jurisdictions to meet ambitious emissions reduction goals for 2020 and beyond.

With these efforts, California and its Governor became important players on the international climate stage. The 2014 Rio Branco Declaration was produced at the eighth meeting of the GCF. In this Declarations, governors from 22 states in countries with tropical forests committed to reduce deforestation by 80% by 2020, if they receive a guarantee of “adequate, sufficient, and long-term performance-based funding.”  Enabling REDD credits to be used as compliance instruments in an ongoing, functioning cap and trade program could be a source of long-term funding.

Also, in the lead-up to the UN climate meeting in Paris in late 2015, California forged the Subnational Global Climate Leadership MOU, known as the Under2 MOU.  Two goals are adopted: (1) limiting warming to below 2° Celsius, which scientists say is needed to avoid dangerous consequences; and (2) limiting greenhouse gas emissions to 2 tons per capita, or 80-95% below 1990 level by 2050.  The MOU included 12 founding jurisdictions in addition to California:  Oregon; Washington; Vermont; Acre, Brazil; Baden-Württemberg, Germany; Baja California, Mexico; Catalonia, Spain; Jalisco, Mexico; Ontario, Canada; British Columbia, Canada; and Wales, United Kingdom. It has grown to 167 jurisdictions from 33 countries, representing 1.09 billion people and $25.9 trillion in GDP, which is 35% of the global economy.  With the arrival of the Trump administration, which is completely abdicating in climate change policy both domestically and internationally, California continues to stand by its climate law commitments.  Long live California’s climate change leadership!

Okay – so the above is what I should have said last Friday. And I might have been able to say it all in 10 minutes, but instead I started out with some preliminary musings that ate up my time.  These musings mainly focused on how California’s rigorous emissions reduction regulation and its international actions were a puzzle – how and why did California become such a leader?   If we think about the principles of regulatory design, California’s climate change regulation makes little sense.  Certainly, it doesn’t follow the rule that there should be a match between the size of the problem and the size of the jurisdiction addressing it.  And how is it that California seems to simply defy the foundational tragedy-of-the-commons problem? Why is the state willing to invest so much in reducing emissions when almost no other jurisdictions are? And what led to California becoming such a policy leader not just in the US, but internationally?

There has been some good writing on these questions – indeed we’ve had ten years to think about them – but I don’t feel like I have a good grip on the answers. As I note above, I think that California’s decision to implement a cap-and-trade program motivated its early international linkages.  It has also turned out that emissions reductions have been cheaper than expected, which has helped California’s cap-and-trade program run smoothly. And surely, part of the explanation regards political leadership:  Governor Jerry Brown emerged as a truly inspired leader, effective in bringing not just the state into the fold, but more than a third of the global economy.  What other factors have enabled California’s leadership?  I welcome your thoughts below!

And as for panel presentations, I hope I have learned not to start a short talk with an idea that puzzles me - next time I hope I can just get the puzzling facts out for all to appreciate and then see if there’s time leftover for additional ramblings!